Technology has made leaps in helping blind people live a fuller life, however, it's not enough. A more accessible internet should be the future.
By Payal Kapoor Dec 12, 2017 4 min read

I was a young, hopeful woman of 21 when my life changed forever. An irreversible cerebral attack took from me my eyesight, ability to hear and damaged my other senses as well. This happened 25 years ago and the events that followed changed my life forever. The fear, devastation and isolation were complete.

Since I was unable to see and hear (for a few months, after which I regained partial hearing), people around me had no idea how to communicate with me for a while. The dark, silent world around me swung me into an abyss of depression.

I had always been a social, interactive person who had friends from all walks of life. My sudden illness and ensuing blindness had everybody rallying around me for a while. But, when the initial expectation of recovery began fading, people went back to living their lives with occasional check-ins. If I had thought I was alone then, I was totally unprepared for the stark loneliness of the years that followed.

For someone who loved reading of any kind to soak up information and entertainment, this state left me without all my sources. Since everything I read until then had been in print, blindness robbed me of what I loved most. This was still the time when computers and related technology was in its infancy. Where could I have quenched my thirst for reading on my own?

As my ability to hear improved gradually, knowing how much I missed this daily activity, I had family and friends taking time to read the newspaper and any book I wanted to be read to me. But this seemed like an imposition on those who had taken on this task and only made me feel worse.

Since everything I read until then had been in print, blindness robbed me of what I loved most.

Internet as an Empowering Tool

I remember distinctly an article that was being read to me about something called e-mail in the early ‘90s. To think you could write to someone on the computer and have it transmitted anywhere seemed wondrous. At that stage, it was only information, as using the computer ever again seemed an impossible dream.

Little did I know it would all change in the not so distant future. During my rehabilitation and subsequent employment, I had my first encounter with a screen reader. Suddenly, a whole new world of possibilities began opening up. I still remember staring wide-eyed as the computer read a whole document that had been typed in. I was told there was something called the “Internet” and the World Wide Web that had the ability to deliver information of any kind at the mere click of a few keys.

While this technology seemed to grow and expand by leaps and bounds, my first experience with it was not until just over ten years back. If I said my life had changed when I went blind, this was like being reborn. Within a few weeks, I was staring at my future and the whole world at the click of a few keys I’d so far only heard of.

Soon I was writing e-mails myself. The era of social media was now a part of my life. With Facebook, came a barrage of friends who had been lost to me for years. I was a part of their lives almost in real time.

What empowered me the most was my advent into the world of other blind and visually impaired persons through various mailing lists. My knowledge base grew. Technology seemed so much simpler with the constant support of others like myself. Social and emotional support came pouring through, giving me a chance to reciprocate and feel useful to others once again.

I now could do a magical “Google search” for anything I wanted. My newspapers were finally within my reach and I could read them all by myself.

The sense of confidence and liberation was exhilarating. Gone was the insecure, shy person and in her place stood a confident, informed individual who was a part of the mainstream. Associations grew by networking over the internet and allowed for more opportunities to work with people. I was now able to voice my thoughts on various platforms and make them heard.

I am now a part of several communities working for disability and gender issues, all of which have an active presence on the internet. However, with the power that this media provides, come pitfalls as well.

Technology seemed so much simpler with the constant support of others like myself.

Accessibility still a Challenge on the Internet

For a blind person like myself, accessibility on the web is still a challenge. This means I struggle to access a lot of information using my screen reader. A lot of websites and other important platforms like banking and payment portals are not made compatible with this technology. This curtails job openings and access to vital information that is available freely to the seeing. This is an ongoing battle with the policymakers and hopefully, we should be a part of a change in the future.

With so much going digital, the footprints left all over the web never fades. When interacting on social media sites, I always worry about sighted persons who can see that I cannot. I see people taking advantage and misconstruing many opinions that I might have expressed.

At some stage when they realize I am a blind person, the credibility is immediately questioned, like being blind somehow makes me less intelligent. It only makes me laugh now. Privacy of information shared is also of great concern to me. Sometimes one wrong click and something you might not have wanted to send can be gone without chances of retrieval.

With so many persons out there concealing their true identities, a mechanism to call them out is what I’d wish for. The frustrations of living in the world of images are indescribable. Everyone has expressions in the form of memes or blurbs of information that totally go unread by screen readers. How it can even think of leaving out a whole community of visually impaired persons eludes me.

These need to be addressed urgently and a more accessible internet should be the future. As I write this, ten years seem to have flown by when I was introduced to this wonderful world which has enriched my life and given me much of what I had lost to disability 25 years back. 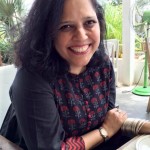 A hotelier and free-lance writer, Payal loves life in all its varying shades. Along with working with a group of hotels, she makes time for friends, experiments in the kitchen, and travels whenever possible.