Living With Anorexia Nervosa And A Body That Has Suffered Enough

I was diagnosed with anorexia nervosa at the age of 16. It's an overwhelming mental illness where the person has an irrational fear of gaining weight, enough to sabotage themselves into starving.
By Nanditha Rajamani May 30, 2018 3 min read

The memory is still so crystal clear that it feels like it was only yesterday. It was a Friday, and my parents had literally bundled me up to take me to the doctor. The doctor weighed me and said, “You’re 5’2″ and 35 kgs right now. If you don’t gain weight, you’re going to die”.

8 years later, I am still trying to figure out what went wrong. I was diagnosed with anorexia nervosa at the age of 16. It’s an overwhelming mental illness where the person has an irrational fear of gaining weight, enough to sabotage themselves into starving. While this is a well-known definition, I’d like to think anorexia nervosa has nothing to do with weight and that it has everything to do with control.

In a culture that reveres success and defines one recipe for success, it felt like the world around me had written down so many rules on how to look, what to do and how to exist. I was supposed to study well, be above average in sports, have curated hobbies and look great. But I wasn’t academically gifted, never played sports and my only hobby was watching TV.

Basically, I was an average 10-year-old girl. Things really started getting to me when I got my first period. My parents were orthodox and observed Brahmin rules about girls not touching anything or anyone when they were on their period. We can’t even serve ourselves food! It was all just too much. Society is so obsessed with certainty that they might prefer death over the failure of an uncertain life. I really believe this.

The reason I mentioned my diagnosis of anorexia nervosa is that I think the general failure at being a “good girl” drove me to the only thing that I felt I could control – my body weight. It doesn’t require any special talent to lose weight really, but the rewards are so high. The approval of those around you when you initially start to lose weight brings about this giddy excitement and makes you all warm and fuzzy. It’s also the most toxic emotion.

How much longer can we tell women and girls to take up less space? Why is it necessary to be thin? Are you really worried about my health? Trust me, I think about it every day. You don’t need to tell me a keto diet will work wonders for me.

Also Read: Being Overweight And Unconventional While Navigating Public Spaces

At this point, it’s also important to really sit down and think about what “health” really means. It’s only a resource for living a full life and a state of physical and mental wellness. If you disagree with this or think that the only way to achieve it is through a diet and washboard abs – then that’s fine, but that is simply your interpretation of health, rather than what it means to be healthy.

This unstoppable pursuit of “health” and “well-being” has become an obsession that starts pushing its way into a person’s value system. I think far too many people have made health a goal to achieve, rather than a system to help them live their lives freely. Even if it’s not the system to pursue, you should be left alone to do what you want.

It definitely doesn’t come as a surprise that issues such as body dysmorphia and eating disorders are strongly gendered issues and women are almost encouraged to be unsatisfied with their body. There is a certain glamorizing of a girl asking her boyfriend, “Do I look fat in this?”

How much longer can we tell women and girls to take up less space?

The irrational idea that fat is bad is so deeply rooted in our culture that the reflex action to seeing an overweight person is an assumption of bad judgement. It’s a hard battle to face alone – in a world filled with uncurated advice on how to live your best life, it might be isolating to realize that the answer to that truly lies within you. Look within yourself to be free of the societal chains that tie you to an “I should be”. You shouldn’t have to justify your choices in life, love, health or anything else.

But this body has suffered enough. It has carried me through two years of starvation, severe depression, anxiety, stress and countless thoughts of self-hate. Today, I just want to thank my body. Because it also allows me to make brave, career-changing decisions. It allows me to enjoy a sunny day when the sun just about shines on my face.

Also Read: It Is High Time We Had A Conversation On Body Image 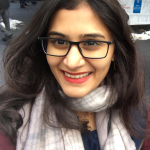 1 part Bangalore, 1 part New York, 2 parts animal lover, all parts feminist. I’m a passionate ally for fat justice and fat acceptance movement, I also like to chime into conversations about global feminism,discrimination towards people of color and sexism in science & tech.

6 Things To Keep In Mind While Writing Asexual Characters