CultureCinema How Has Bollywood Dealt With Men Loving Men?

Bollywood has always had a lot of opportunities to sensitively depict men loving men, but it has usually used homosexuality as a punchline.
By Guest Writer Jul 13, 2018 5 min read

Bollywood love stories are usually told through songs. Most heterosexual love escalates to marriage and pregnancy, but how has gay love been depicted in these portrayals? Most film songs borrow their lyrics from ghazals, which have often portrayed homosexual love, or left the gender of the lovers unclear, which very beautifully in the ambiguity of their words created an all-inclusive space for lovers of both the same sex and of opposite sex.

However, Bollywood, to purge itself of homosexual undertones, fills it with high amounts of heterosociality. For example, men will either be shown as arch rivals of each other, or they will fight that rivalry between them over the body of the female counterpart.

It all started with a Dosti 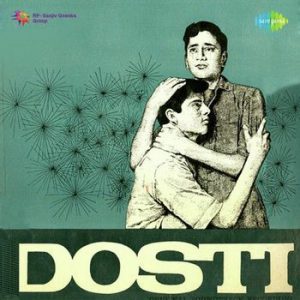 Dosti was released in 1964. The word dosti literally means friendship, but the friendship in this movie between the two men was of an exclusive kind. Neither of the two protagonists at any point in the movie were shown to have any kind of heterosexual relationship – rather, both of them were shown yearning for each other. One of the film’s more significant scenes showed Mohan yearning for Ramu when he was sick – he kept rubbing the pillow on which Ramu would sleep. The filmmaker tried to invoke the ingredient of mythical legends with the name of the protagonist Mohan, another name of Lord Krishna, who was shown to be the possessor of an attractive body and beautiful eyes, that were time and again complimented by Ramu.

What initially drew the couple together was the similarity of their situation – both of them were homeless, had no one to go back to, had no money or resources to even get food, and were left with no option but to beg. Then, as the movie proceeded, Bollywood’s typical romance tropes started to make appearances. First came the metaphoric and literal holding of hands. Mohan tells Ramu that since they had now held hands, he couldn’t act as though the two of them were in a relationship where they needed the strangeness of formality.

The purity of their love was polished further by the fact that they were together in the expansion of their family. The very first member they added to their kindred was Manju, who belonged to an economically powerful family and used to live with her brother Ashok.

The word dosti literally means friendship, but the friendship in this movie between the two men was of an exclusive kind.

Touch added further fire to this love between the two men. When Mohan specially went to the market to get an ointment for Ramu’s injuries, Ramu tells him that it was not the ointment that cured him, but the touch of Mohan’s hands. Ramu takes Mohan’s hand and rubs it against the surface of his cheek.

Finally, when Ramu and Mohan were blessed by Mausi in the hospital while they were hugging each other, she says, “Bhagwan Kare tumhari Jodi issi tarha bani rahe” (May you to stay together forever as a couple by God’s grace). This dialogue allowed a lot of room for the interpretation of these men’s relationship as the love between a couple. The word ‘jodi’ means couple. Dosti could clearly be read as a brave attempt by Bollywood to portray men loving men in 1964.

Monsoon Wedding released in 2002, and told the story of a chaotic Indian wedding. It was strongly suggested that the female lead’s (Aditi’s) brother, Varun, was gay. Here, Mira Nair’s portrayal of homosexuality was done in an extremely poor manner. While feminine gender expressions among gay men are absolutely okay, Nair’s portrayal of Varun seems almost to be a caricature of gay men. He is depicted as excessively effeminate whose only interests lie in the ‘feminine sphere’. He is constantly shown doing things like dancing, singing, watching cooking shows, and trying out new recipes. The movie shows gay men as people who are removed from all the activities and “spaces” of straight men – Varun is never shown present along with the other male characters in the movie. 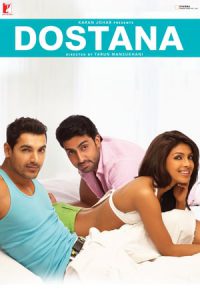 Dostana was released in 2008, and told the story of two male friends, Kunal and Sam, who landed up in Miami and, rendered homeless, pretend to be gay to rent an apartment. Despite homosexuality being the main focus of this film, it made a mockery of the whole concept of homosexuality, falling back on homophobic tropes about gay men.

A gay character in the film, Murli (M), was portrayed again, as excessively effeminate. Tarun Mansukhani’s portrayal of gay men suggested that all gay men went around wearing bikini tops and singlets. The movie reified the patriarchal trope that anyone who does not have sex like a straight man is “reduced” to behaving like a woman, who are seen as inferior.

However, we cannot reject the whole movie altogether. Some scenes attempted to destabilise the idea of fragility associated with gay men, by portraying an army man as gay, for instance. The film also subverted certain patriarchal tropes that have acquired a compulsorily heterosexual image, like the image of a wedding automatically bringing to mind the image of a man and a woman dressed as bride and groom.

When Sam’s mother imagines her son in a relationship, she sees two men dressed as a bride and a groom. However, patriarchy lurked in the corner of that scene – instead of imagining two men dressed in ‘sherwanis’, she saw one dressed up as a man and the other one as a woman, in a ‘lehenga’. 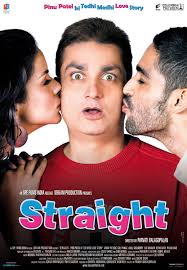 Straight – Pinu Patel Ki Tedhi Medhi Love Story, released in 2009, was one of the movies that took up homosexuality as its main plot. It told the story of Pinu Patel, a Gujarati man in London who was confused about his sexuality. The movie very clearly showed the anxiety, tension, curiosity, social pressure and the entire existential crisis that one goes through when one is realising that one is gay. However, Pinu realizing that he was not gay as the [anti]climax of the film maintained the curtain that Bollywood has always tried to use to hide gay love.

Pinu saw homosexuality as something that would make him less of a man. This hard and fast conception was then mitigated by the character helping Pinu explore his sexuality, Rajat, who discovered his own homosexuality in the process. Rajat however, was depicted in an Anglicised fashion, while Pinu was shown as someone who was rooted to his cultural values, implying that homosexuality is a Western import, and that a ‘true Indian’ would always be straight.

The movie was bold enough to show a kissing scene between two men. For Bollywood to open up to even depicting such scenes showed progress from the days when men loving men was symbolised by the touch of a hand between Ramu and Mohan in Dosti.

There has always been a big window open for gay love to enter a film in its various manifestations – be it as friends or lovers. But Bollywood opted to use homosexuality as a punchline instead. If Bollywood used the massive power it wields more responsibly, it could portray homosexuality in a much more sensitive fashion, to instil greater social change.

Sahil Bansal is a student of Law at O.P. Jindal Global University, Sonipat, Haryana, India. He writes on issues related to Law, Gender and society.

Houston, We Have A Problem! And No One Is Talking About It!