Testimonies of these 13 Kashmiri women have helped bring home the side of reality that the society that has so far not spoken of.
By Arshie Qureshi Oct 11, 2018 6 min read

#MeToo took decades to hit Hollywood and even longer to hit home. Once the skeletons were out, it shook all those who had dark secrets to hide. Why does it surprise anyone even though every woman can recall an incident of harassment, molestation, or worse? These conversations have always taken place in closed rooms where women confide in one other and the perpetrator gets away. #MeToo broke these walls. Women began expressing solidarity with each other and this solidarity became a source of strength. #MeToo is not only important because of the solidarity it forms, but because until now women have always found themselves at the lower end of the power dynamic in every aspect of life.

The simple yet powerful two-word hashtag took even longer to reach Kashmir. The lid of the can was open by Rama Dwivedi by exposing Fahad Shah, a Kashmiri editor of the news portal Kashmir Wala. A Kashmiri’s name appearing in the campaign had been unfathomable until then, especially someone who enjoys a certain repute in the society, being the author of a book that was well taken in the valley and is seen as taking a very ‘pro-people’ stance. The moment for Kashmiri women to speak followed soon after this.

It is not as if women have not been wanting to speak about the abuse but belonging to a male-dominated and a very closed community at that, coming out has always been difficult. Some women approached a local NGO, Kashmir Women’s Collective (KWC) with their testimonies. The NGO collected 13 accounts and put those on their Facebook and Twitter accounts. It named journalists, academics, and even some anonymous abusers. The list named at least four media personalities and it came to be seen as an attack on this one profession only. The reality, however, is that the disclosure is a brief glimpse of what is being covered behind the four walls and the private chat boxes.

These conversations have always taken place in closed rooms where women confide in one other and the perpetrator gets away. #MeToo broke these walls.

Kashmiri women have been fighting with the State for space where their bodies are not seen as sexual entities for decades now. But for generations, they have been unable to find this space and the fight has only been met with silence. The disclosures this time once again brought forward the fact that Kashmiri women are fully capable of using their agency to call out any behaviour that are not acceptable to them and they are not ready to take it anymore. A text, an approach, all of it becomes a source of harassment when there is no consent from the other person. If you don’t believe it, take a look at a woman’s ‘other’ inbox on Facebook and you will find it full of hello dear texts and dick pictures of random men.

13 testimonies may not be considered not a big number but it is enough to bring home a reality of the society that has so far not been spoken of. The predators are everywhere and this has nothing to do with one’s level of education, and above all, the acceptance of the fact that it happens in Kashmir too. Men have also failed to understand the complexity of perceiving abusive behaviour as a victim. Those men who have been named in the list can easily be seen as belonging to the class of most educated, who have travelled the world.

Such image often creates fear and self-doubt within the victim which makes them hesitate to speak out or talk back. Pushing a block button or saying no is difficult when you have been brought up in a culture where talking back is never an option for women.There can be endless reasons why women chose to keep quiet in a certain situation. Moreover, it makes more sense for men to not act like that in the first place and not put the onus on women once again.

The national media was quick to follow the development but the local media maintained an eerie silence, till Wasim Khalid, a journalist from Kashmir kickstarted a smear campaign against the members of KWC, accusing them taking sexual favours from higher-ups and multiple things to pull their credibility down. It depicts a classic example of shooting the messenger. Is the local media too scared to acknowledge that the men from their fraternity have failed women? 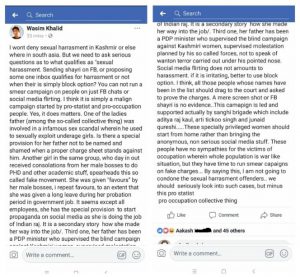 One of the easiest ways to attack any voice in Kashmir is by dubbing them as statist forces or working closely with the state. That is exactly what Wasim resorted to doing. His post invoked the state vs anti-state narrative to touch the chords with the local audience. With his post, he once again pushed women’s experiences in a domain of conflict where the men can keep fighting over women’s bodies, doubting their agency and ultimately discrediting their experiences. That is something the Kashmiri women have been facing for years now, the subject of their victimisation is only given incidental attention.

The movement, he alleged, had been started by the Right wingers to malign Kashmiri men. He made it to be a fight between women of the state and the men fighting for freedom of Kashmir, a replica of what is happening in the mainland where anyone questioning the mainstream is dubbed as anti-national.

Wasim’s launch of this smear campaign against the people who disclosed the harassment is  harassment by itself.

Wasim’s launch of this smear campaign against the people who disclosed the harassment is harassment by itself. The act tells precisely why women don’t report the harassment. In a victim-blaming society, the fear of backlash is so strong and real that women prefer keeping quiet. An abuser may be drunk but that the victim was drunk too is enough to give a clean chit to the perpetrator and shame the victim. All of this makes the victim believe that it was her fault.

In Kashmir, where drinking is rare, a single worded and visibly uncomfortable response by a woman on Facebook is seen as her consent or wanting it. Wasim can never empathise with a woman who has been victimised and then buried it in her chest. The day she decides to come out, she has to face the burden of proving it. The women who have spoken up are still not safe from these men. One of those named in the list shamelessly began disclosing the identity of the girl, proving acceptance of his behaviour, nevertheless very unapologetically.

The criticism clearly shows that many men in Kashmir, like Wasim, are yet to understand the concept of consent. To them, unless there is a physical contact, there is no harassment. They are only interested in something ‘big’ – like rape, perhaps. Unless it is that ‘huge’, they refuse to acknowledge it. So what if it was a well-known journalist sending shier o shayiri to a woman half his age? So what if he was asking her repeatedly to meet? So what if a college professor called his student ‘maal’? #MeToo in Kashmir is also important because such violence has become a part of the daily lives of women and it would be a lie to say that everything that is associated with women is not sexualised.

The talk about sex is highly tabooed in Kashmir, but only as long as it remains private. It is acceptable even if its rape, cheating or any other form of violence or abuse if it is done in private. A marital rape or an extramarital affair is acceptable as long as the victim is quiet. Once she goes public, apart from proving it, she is also required to prove that she is infallible.

#MeToo in many ways reflects a threshold that the women have reached from carrying all these burdens and women want men to be held accountable by the society. It reflects that any abuse can no longer be tolerated and that it is time for men in Kashmir to know that this can’t go on any further.

Wasim Khalid is currently working with a local daily, Kashmir Reader and has been a Reuters Institute fellow.

A teacher and a learner.

Film Review: Hellaro—Feminist Tale That Cuts A Deep Wound In The Prison Of Patriarchy