SocietyCampus Will Gender Segregation Solve The Problems Highlighted By #MeToo?

To say that gender segregation is the solution is to say that any exchange between a man and a woman is inherently sexual and nothing beyond that.
By Ismat Ara Oct 30, 2018 6 min read

On 25th October, a very concerned group of 4-5 male students decided to host a discussion on how to tackle the #MeToo ‘issue’. You would expect talks on gender sensitisation in such a discussion, but these students had a better idea. According to them, gender segregation and not gender sensitisation is the need of the hour. Talking about the root ‘causes’ of abuse, Ejaz Ahmad, a law student from Jamia Millia Islamia said, “We really need to get to the root of this problem which is the commodification of women. Why do we need women to dance in IPL grounds during cricket matches? Why do we need women in deodorant ads? The answer is simple, to sell it. The status of women in a capitalistic setting is flawed to begin with. Islam fights this very idea.”

Talking about the problem in identifying the ‘limits’ in sexual exchange, he said the best way is to accept the boundaries set by god to avoid such cases, hinting at gender segregation. The discussion was organised by a group of male students in Jamia Millia Islamia. In over an hour long discussion, the word ‘consent’ surprisingly (Or unsurprisingly, for it was organised solely by men) found no mention. 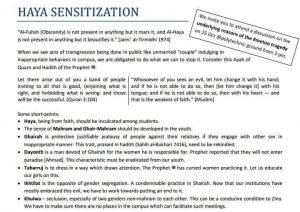 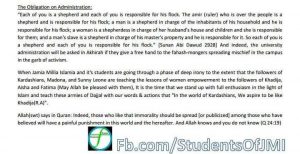 The program, called Hayya Sensitization was initially only meant for men, but after receiving immense backlash on social media, the organisers decided to also ‘allow’ women in the discussion. Arshad Warsi, a student of MBA in JMI and one of the organisers said, “It’s not that we wanted to have only a discussion with men on the matter. In fact, we had planned a separate discussion for women on this issue as well, since we believe in the idea of segregation. But due to the pressure and negative response we got, we had to give in and we decided not just to have a common discussion for all but also to invite a woman to speak.” Maryam Zehra, the (only) woman who spoke in the discussion, said that she had come as audience but was spontaneously invited to speak on the spot due to the pressure they faced.

after receiving immense backlash on social media, the organisers decided to also ‘allow’ women in the discussion.

The program was still attended mostly by men, and was hosted completely by men. One of the organisers of the program said, “It’s extremely important to talk about social and political issues in academic spaces such as ours. But when we posted regarding this over the web, people tried making a controversy out of it because the same liberals who claim to believe in freedom of speech and tolerance lose their minds when something with an Islamic point of view is said.”

Arshad Warsi, tracing the journey of the #MeToo movement said, “As we all know it began in Hollywood and has just now reached Bollywood and the rest of the media. The same media which has been targeting Islam for being backward in women’s related issues is now being exposed. Why is it that now all these abusers are coming from the most ‘empowering’ of fields – media, film industry etc, the industries that are apparently filled with women’s rights advocates?” While this is a valid argument and something worth thinking about, it is still unacceptable to doubt the legitimacy of a movement for the simple reason that it originated in the West.

Mariam Zahra, who was randomly invited to speak from the audience owing to the immense pressure that the organisers faced for organising a discussion on #MeToo without a woman speaker said, “It is true that Islam as a religion does not commodify women, but I also know innumerable women who have been abused despite their hijab, So to say that segregation will solve problems is akin to saying that Hijab will solve issues. We all know that isn’t true.”

Immediately after, she offered her own version of a religious solution to this, “To all brothers and sisters sitting here I say, think of God as a CCTV camera so you don’t commit crimes for the fear of accountability which has completely escaped the #MeToo movement despite all the good things it has done…”

Infidelity, communism, feminism – after talking about everything but #MeToo the group finally moved on to suggest ways of avoiding the ‘problem’ of #MeToo. Firstly, according to the enlightened group, people should inculcate ‘Taqva’ (fear of god) in them and secondly, we should all follow the boundaries set by most religions which is, yes, gender segregation.

Arshad, talking about this said, “Hayya (Shame) and Purdah (Hijab) are not gender specific, it is for both boys and girls. And the best way to avoid not breaking these rules is to simply avoid mingling with the other gender.”

Community Specific Solutions To An International Issue Are Simply Futile

Showing contempt for the ‘so called Islamic’ measures that this event had suggested, Alfia, a student of Islamic Studies in Jamia Millia Islamia said, “#MeToo as a movement is completely legitimised by the religion that I follow because it teaches me to raise my voice against injustice being done to me. I think it gives me, and many other women immense strength and power to know that my religion advocates for raising my voice if I have experienced any injustice.”

to say that segregation will solve problems is akin to saying that Hijab will solve issues. We all know that isn’t true.

In such a time to suggest gender segregation is audacious and self-defeating – that too in university spaces that aim to provide good education and environment to students conducive to critical thinking leading to progressive actions. The example is their own program which they couldn’t conduct in a segregated format as planned because it backfired. Such events further the problematic ideas that do nothing but add to the problem.

To say that gender segregation will mean there are no instances of gender based violence against women is to say that any exchange between a man and a woman is inherently only sexual and nothing else. This further demonises the interaction between the two and also suggests that men are inherently abusive and that they will abuse if put in with women, which is, or at least I hope is, a gross generalisation.

Adil Hussain, a student of MBA and part of the audience said, “It’s a pity that the #MeToo movement opened up the oppression of women without really providing for a solution. Just making something viral does not mean it will get addressed. Now we here are really trying to find solutions through the lens of religion and society instead of just talking about the problems…”

Now, apart from being extremely regressive and almost impossible to achieve in a democracy, both these solutions that they have very graciously presented us with are also based on one assumption – that people are essentially religious, which really is not the case.

Tanya Tehsin, a woman sitting in the audience said, “I’m a religious woman but I can say for sure that whatever they are saying is completely futile and useless because god’s fear, even in religious people, cannot be forcefully instilled.” Not just that, it can definitely not act like a solution to say that one shouldn’t hurt or abuse other people only because god will be watching them. This is simply to say that the problem is so deeply rooted that only surveillance can help solve it and nothing to change people’s mindset should be done. To threaten punishment without trying to bring change through conversation and discussion will, even if it works, ultimately be a temporary solution.

Also read: One Year of #MeToo In India: Stories We Tell And A Lifetime of Lessons

A long term solution would be the exact opposite of the two suggested here – gender sensitisation, not segregation so that the idea of exchange between different genders is normalised instead of being stigmatised further. Secondly, it is important to understand that women are creatures that deserve to lead a normal life without constant fear and men are also not essentially abusers who have to be put under scanner for all their actions to avoid abuse. 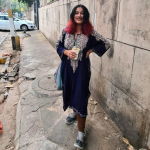