SocietyWork How Has The #MeToo Movement Affected The Lives Of Bengaluru Working Class Women?

To tackle at least part of the issues raised by the #MeToo movement, the Domestic Workers Union has been demanding the presence of an ICC in apartment blocks.
By Guest Writer Nov 16, 2018 5 min read

There are men wearing white shirts and panches, and a bunch of college-going boys and girls seated at the back. For a while it begins to seem like there are ‘too many’ men for a #MeToo meeting. And then the women start pouring in and the men sit forgotten like a big clock someone notices only once.

On 3rd November at the women’s lounge in Kannada Bhavan, the #MeToo meeting was organised by the Garment and Textile Workers Union, Domestic Workers Union, BBMP Guttige Pourakarmika Sangha, and the KSRTC BMTC NWKRTC Workers Federation.

We leave our chappals outside before walking into a small room. The women sitting close to the stage are singing a Kannada song. When they finish, the emcee – a young girl quickly ushers us into why we are here. She introduces us to the seven women sitting on stage – they are all representatives from the organising committee.

For the next hour and a half, we listen to the seven women speak, after which the other women, those sitting at the back and by the corner share their stories.

Other people’s homes are our workplaces. What we do is not even recognised as work. If they don’t recognise work, will they recognise sexual harassment at work?

The first woman to speak is a member of the Domestic Workers Union who says that often the men whose houses they clean don’t give them salary on time and sometimes not at all. If they insist, the men say “if you want it that badly, come and take it from my pants.” Humiliated, they have often left these homes and never gone back. Sometimes the men say “I’ll only give you money if you get a thaali tied by me” (loosely meaning if you let me sleep with you)

“We don’t know whom to go to for help. Some of these men live alone so even the neighbours don’t want to get involved”, she says. But is it any better if there is someone they can go to for help?

The woman who speaks after her says, “I once worked at a house where the madam’s son kept following me around wherever I went to clean. One day no one was at home except him and he grabbed me. When I told Madam about this, she refused to believe her son would do something like this. And then she gave me double the amount (Rs. 12) and told me never to come back again.” 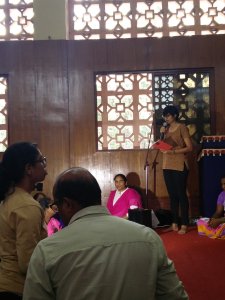 The women nod furiously when another member from the DWU says “Other people’s homes are our workplaces. What we do is not even recognised as work. If they don’t recognise work, will they recognise sexual harassment at work?”

A trans woman stands up next and everyone turns their heads to look back at her speaking from the last row. “I was once raped by a man I worked with. When I went to the police, they told me “people like you are meant to be raped. If they don’t rape you, who else will they rape?” When I complained to my employers, I lost my job. I wrote about this on Facebook but obviously I am not so important that people will share it.”

Among the many things that were brought forward at this meeting, the question of visibility when it comes to work and rights at the workplace are some of the important ones. What do you do if your work is not considered work and you are not considered a person? Will the sexual harassment against you be acknowledged?

As a member of the Domestic Workers Union pointed out, the rape of minor girls (maids) almost never makes it to the mainstream news. “There have been cases where the girl is raped, murdered and buried in the compound of the house she works in and no one knows she’s missing until weeks, sometimes months later.” To tackle at least part of the problem, the Domestic Workers Union has been demanding the presence of an ICC in the apartment blocks.

People keep pouring into the room so after a point, we are breathing each other’s air. When it seems like no one else can fit in, the photographers leave.

Also read: #MeToo In Tamil Nadu: The Apathy Towards Vairamuthu And The Others Accused

When the emcee says that the men can speak too, there is a moment’s pause before some half laughs fill the air. A man on the farthest right stands up and introduces himself. He has worked at a garment and textiles industry for a year and was also on their anti sexual-harassment committee. “In the one year that I was there, not a single case came to us,” he says. “And this is not because women were not harassed. Obviously they are. About 80% of the garment and textile industry employees are women and I know they get harassed.” So what stops the women from complaining? The committee has no external member. All the members belong to the same workplace. So the women feel afraid to complain.

When I went to the police, they told me – people like you are meant to be raped. If they don’t rape you, who else will they rape?

The last woman to share is a lady bus conductor whose stories made the leaving people return. She says, “The bus, as you know can be full of men. I have to squeeze myself between them and walk. They touch and grope when I give them the ticket. I have only two hands. In one I hold the ticket box and in the other I hold the money bag. I don’t have any more hands left to protect myself. If I lose the money bag, I lose my salary.” She breaks down and says she won’t be able to talk about this anymore.

The other girl to break down is a college-going student who keeps swallowing before revealing a little more about a college professor who insists that she bring him the homework inside the staff room every day. To us she says, “Please nan photo tagibedi”. (Please don’t take my photo) “He gets very irritated if I don’t stand close to him while he is looking at my homework. He has done worse but I am too scared to reveal all of that here.”

Also read: One Year of #MeToo In India: Stories We Tell And A Lifetime of Lessons

Her friend stands up next to talk about another friend whom the same professor texted late every night, “He says ‘What are you doing sweetie?’. We don’t understand this sweetie business. All we know is that our teachers shouldn’t talk that way with us.”

Adre ee #MeToo andre enu? But what does this #MeToo mean?

A woman sitting by the stage, a member of the garment textiles stands up thunderously to give closing remarks and says “I don’t understand why people are acting as if no one before has ever spoken against sexual harassment. We have been speaking against it. We always have. It’s not a new thing for us”

This article was originally published on Open Dosa and has been republished here with permission.

Popular Culture And Gender: We Must Scrutinise Narratives That Promote Stereotypes