Anagha Smrithi: You work with policy advocacy to address caste and gender-based violence. What sort of policy initiatives have you been involved with?

Judith Anne Lal: The core focus of our organisation is to achieve legal justice for the community. We deal with cases of caste and gender-based atrocities primarily through legal intervention. For a while now, we have been engaged in monitoring the implementation of the Scheduled Castes and Scheduled Tribes Prevention of Atrocity Act (SC/ST Atrocities Act.) We have also been advocating for amendments in the same through the collective effort of a coalition of Dalit and Adivasi organizations, intellectuals, activists and lawyers led by National Dalit Movement for Justice.

Our interventions are case specific. This involves various stages starting with fact-finding missions and the filing of FIR, and goes on to following up with cases during later stages in the court. We work closely with the judiciary to achieve legal justice for the affected members and the communities at large.

according to legislation, every state has to have high-level vigilance and monitoring committees.

In cases of sexual violence against women and minors especially from Dalit and Adivasi communities we focus on the invoking of appropriate sections of SCs and STs PoA Act in conjunction with POCSO, IPC and sexual harassment laws. Invoking various legislations helps us build a strong case, and takes us closer to implementing justice.

AS: What are the obstacles that come in the way of implementing such policies? How do you overcome these obstacles?

JAL: Implementing the SC/ST Atrocities Act is a challenge, since very often the concerned authorities do not adhere to the stipulated rules of the law. For instance, according to legislation, every state has to have high-level vigilance and monitoring committees. However, in many states, these committees are either not formed, or are not functional. Contingency plans are not in place to address caste-based violence. We have consistently monitored the state of these provisions and demanded the implementation.

Another challenge is judicial impunity in addressing caste and gender-based violence. There is a persistent and prolonged delay in completion of the trail of cases in court that deal with violence against Dalits and women. We are routinely involved in judicial advocacy to implement the provisions of the available laws and of the Constitution of India.

AS: How can the larger public be informed about policy initiatives to address caste-based discrimination, and express their support?

JAL: First of all, the public needs to be aware of the forms of caste-based exclusion and discrimination that exist. They also have to be able to recognize these as human rights abuses. Once this recognition and acceptance come to be, there can be focused public drives along with training about human rights and equity for young people and students.

the public needs to be aware of the forms of caste-based exclusion and discrimination that exist. They also have to be able to recognize these as human rights abuses.

What is also important is to have awareness about the laws and schemes that protect the SC community from CBD (Caste-Based Violence) and work with government nodal agencies to hold awareness camps.

AS: While reading about your research interests, I saw that you were interested in understanding minority rights among the Indian Diaspora. Could you talk about what the Indian Diaspora is, and in what ways caste inequality occur in diasporic communities?

JAL: The Indian diaspora forms a very heterogeneous group across the world. However, it is their migration period that defines their socio-economic status. For instance, the people that left as to Africa and other Caribbean states as indentured labourers during the colonial period form the oldest part of the diaspora. Later came a wave of traders migrating out of India. We can trace caste consciousness in these groups. In places like South Africa, Sri Lanka, the diasporic Hindus maintained a strong caste identity. They upheld certain rituals and observed scriptures like the Manusmriti in a way they had not done earlier. This inevitably led to an emphasis on marrying within the same caste group, thus bringing caste from India to other countries. Though things are changing now, there is still a clear division between the generations that follow those who came as indentured labourers and those who came later as traders or passenger Indians.

AS: How can movements and solidarities based in India respond to caste-based discrimination that takes place in other countries?

JAL: What’s most important is to build a collective voice along with the growing Dalit civil society movement in India itself. We can then map the other countries affected by caste-based discrimination in South-East Asia, Africa and Latin America. Once this happens, other movements can come in solidarity with the Indian Dalit Civil Society movement and call for caste-based discrimination to be recognized as a global phenomenon by State governments and global Human Rights agencies.

FII thanks Judith for taking out time to do the interview. 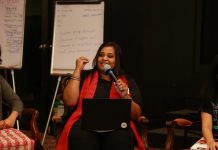