Home Society Struggles In Sweatshops: The Irony Of Your ‘Feminist’ Graphic Tee 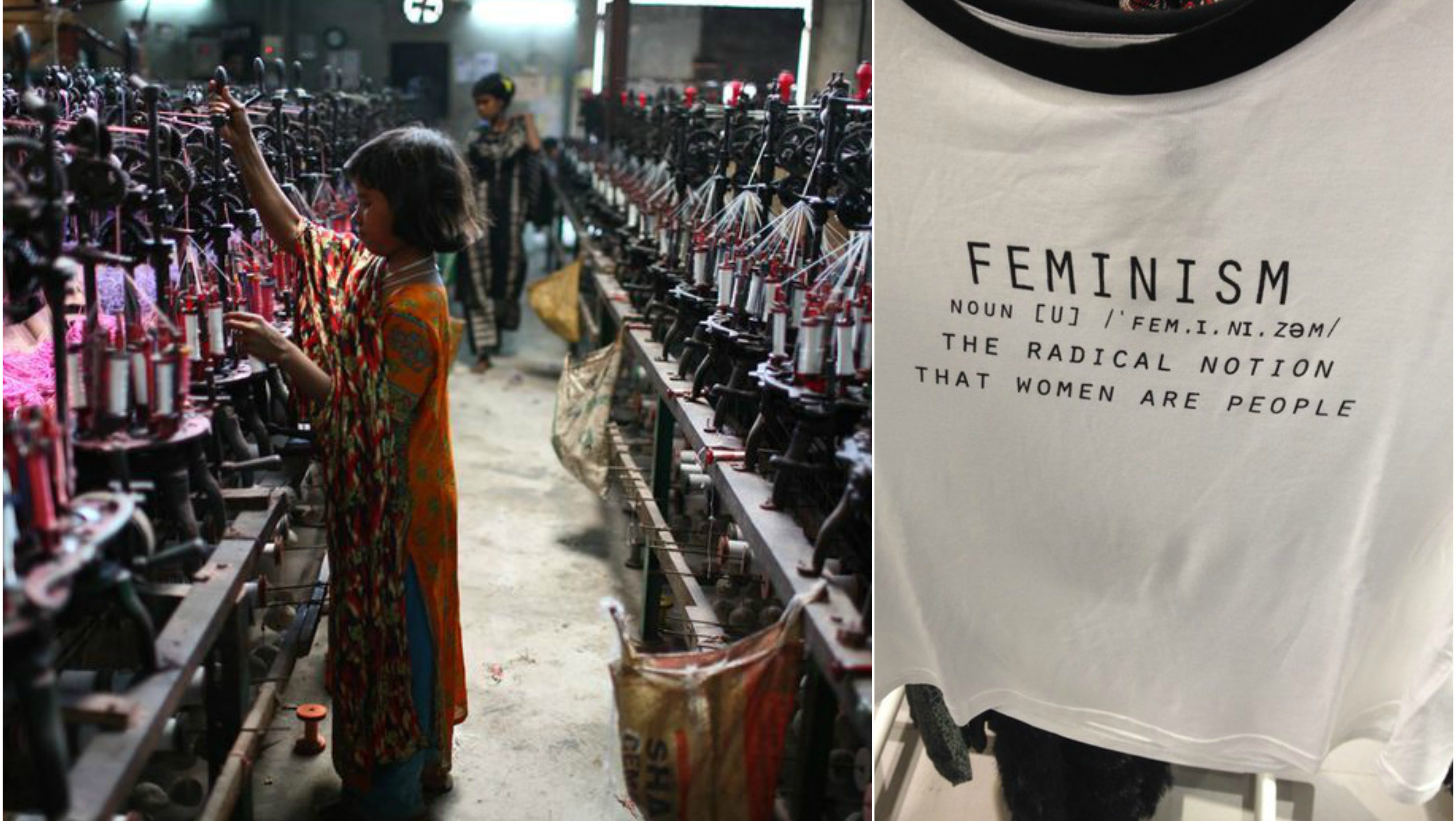 Defined as ‘an approach to the design, creation, and marketing of clothing fashions that emphasizes making fashion trends quickly and cheaply available to consumers’, fast fashion has often been under the radar for the grave impact it has on the environment. Textile dye and polyester microfiber are some of the largest contributors of water pollution worldwide, and as fast fashion focuses on speed and low costs, little attention is given to its environmental implications.

However, nature is not the only one which is adversely affected by the rising popularity of fast fashion. Some of the biggest brands in the world are guilty of inflicting abuse on the under-paid workers employed in their factories. Poor working conditions, long working hours, significantly low-wages and gender based violence form a regular-day’s routine in these sweatshops.

Reports published by Global Labour Justice name GAP’s and H&M’s sweatshops as sites of regular abuse and violence faced by their workers in India, Bangladesh, Sri Lanka, Indonesia, Cambodia and Sri Lanka. With the sharply rising popularity of fast fashion, comes unreasonable deadlines and skyrocketing production targets, which create an immense amount of pressure on the labourers employed in these sweatshops. These, in turn lead to sub-standard working conditions which are further aggravated by regular abuse, in the form of rape, gender-based bullying, caste-based bullying and many such forms of discrimination. Other malpractices also include forced overtime as well as prevention of bathroom breaks.

Power-based hierarchies, in the form of supervisor-worker, are prevalent in workplaces. In most sweatshops, these hierarchies are seen as a license to exercise the patriarchal, casteist, and class-based power structures—one that paints men as superior to women and the workers as less of humans than their supervisors. Such forms of abuse led to over 540 workers speaking out against their supervisors appointed by these brands in their factories, between January and May last year.

Simple requests such as asking for fair overtime compensation or seeking sick leaves, make the workers susceptible to the wrath of their supervisors. One Bangladeshi woman reports that her supervisor yelled at her saying, “You whore, do you think this is a brothel? You must meet the production demand here. If you want to continue to work here, listen to us”.

While labourers in some parts of the world are beaten up for not meeting production targets, those in other areas report that their supervisors do not touch them but instead hurl things at them, so that there is no mark that could be used as evidence against them. The paucity of attention and remedies given to these labourers often lead to them resorting to desperate measures. Once, few notes were found in Zara garments, manufactured in Turkey, saying “I made this item that you are going to buy, but I did not get paid for it”.

In most garment producing factories, these hierarchies are seen as a license to exercise the patriarchal and casteist, and class-based power structures, one that paints men as superior to women; one that paints the labourers as less of humans than their supervisors.

One cannot help but see the irony that these factories serve as the site of both gender-based violence, and production of a wide array of t-shirts, dresses, hoodies and sweaters reading ‘Girl Power’ and ‘Feminist’. While pink capitalism and performative feminism are common features of brand-building, however, extreme cases such as regular abuse and gender-based violence get veiled behind a more ‘inclusive’ lineup of models, seemingly woke ad campaigns and ‘We Can Do It’ merchandise.

Initiatives such as H&M’s donation of $200,000 to United Nations’ ‘Girl Up Initiative’ seem fruitless if fast fashion brands continually exploit the disenfranchised and the poorest of the poor. While it is common to see vegans renouncing labels that are at opposite ends with their ethics, not the same level of promptness is seen when the plight of these disadvantaged labourers makes for front page news. NGOs regularly ‘save’ women from sex-work and push them into these factories, often leading to little or no change in these women’s lives. Their exploitation does not come to an end.

Also read: Why Sustainable Fashion Is A Feminist Issue

While pink capitalism and performative feminism are common features of brand-building, however, extreme cases such as regular abuse and gender-based violence get veiled behind a more ‘inclusive’ lineup of models, seemingly woke ad campaigns and ‘We Can Do It’ merchandise.

Since government-level reforms are slow to come, and they require a loophole-free implementation and need to be as inclusive and pervasive as possible, there are a few steps that we as customers can take. Each season collection and end-of-season sales seem tempting enough, but the onus is on us to spend as little as two minutes looking up the brand’s ethics.

Moreover, ethical violations are not solely restricted to labour exploitation, but go as wide as their environmental implications. Switch to alternative brands that produce sustainable fashion, thrift as much as you can, promote hand-me-downs instead of shunning those. Responsible fashion choices pressure brands to undertake labour and environmental reforms, and therefore, are the need of the hour. Go for eco-OOTDs rather than polyester and toxic-dyed ones. Go for domestically and ethically manufactured clothes instead of fast fashion trends.