IntersectionalityDisability Taking Up Space: My Speech Disability Is Both Personal & Political

In an ableist society such as ours, people with speech disability are often talked over and not heard out in a way that they are deemed invisible.
By Nu Oct 29, 2020 6 min read

One needs to just look around to see how palpable the discomfort is with disabled bodies and voices existing in society. Disabled folks are stripped not only of their right to live with equality and dignity (because of years of verbal and physical harassment), but also of their right to express themselves freely. They are assumed to dependent and devoid of agency to such an extent that even when they speak or express themselves, they are barely heard.

Ableism in society is such that it devises a system of discriminating against disabled folks by patronizing them to a level that they are othered and discriminated against and pushing them to the margins of society. Other than their own fights, their representation is pushed away from social movements and away from protests (by making them inaccessible). Often, their voices go unheard in political spaces.

Also read: Taking Up Space: The Need For Disability-Affirmative Therapy

Contrary to the popular notion, politics is what makes us, keeps us alive and breathing, keeps the dominant identity in power and suppresses minority, marginalised voices. Today, I ask: As a disabled woman, why do I need activism to give meaning to my voice and my experience? Why does it empower me when I talk about my experiences as a disabled, queer woman? Activism gives me a voice, and a purpose. My speech no longer serves just an auditory\communicative function, but also as a tool of political liberation. According to the feminist scholar Naomi Wolf, when womxn give a voice to their non-fictional sexual storytelling, it inherently reclaims and strengthens feminist voices – guess what? This is political too!

My speech difficulty that is sidelined and ignored just because ableists fail to comprehend what I’m saying, is political. When my speech and agency is ignored, and others speak over me–a tool of systemic oppression–is also political. I speak a language of resistance and rebellion.

I grew up with a speech difficulty, something that I’ve been ashamed of, for a long time. Sometimes, I wouldn’t talk for an entire day, because I was so afraid of people hearing my “disabled” voice. I was disgusted by how it sounded. So much so, that when the teacher would begin the role call I’d dread it because then that meant having to yell back “Yes, I am present” to my name. When I say I was afraid to Take Up Space, I also mean the space that the voice I have muffled for years would take up.

But now when I look back at every instance, I think to myself, “Should we really have a loud voice to take up space?” Maybe my voice is not loud enough for everyone to sloganeer with at political rallies and protest sites and give elaborate public speeches. But it is still enough, isn’t it?

Why don’t we make the definition of political spaces more accessible and disabled-friendly instead? Just because I’m an activist who writes about disability makes me no less than an activist who speaks about disability in front of a large audience. I feel that we really need to change our perspective and how we view certain concepts, even within the disabled community itself, where womxn with speech difficulties are discriminated against.

As I entered college, I was made aware about my disability more than ever. I would have people in college who would readily disregard my voice and tell others “I don’t understand her!”. The funny thing about non-disabled ableists is that they would look at me with strained eyes and pursed lips, trying to look like they’re trying really hard to listen to me, only minutes before they lose their patience. Speaking seemed like an arduous task and I found myself shutting down.

It’s funny how on one hand I was subjected to such disregard and an invisibilisation of my voice owing to my disability, on the other, the society around me was raring to pedestalise us people with disabilities. They’d create this divine, mystical aura around disabled folks, which I sometimes found similar to aliens (ie. someone who is incomprehensible but at the same time fascinating) and yet they would not have the patience and empathy to truly understand us.

Many womxn with speech difficulties have encouraged me and acted as my disabled role models, something that my 10-year-old self craved for.

One of these womxn are Jeeja Ghosh, born with cerebral palsy, who taught me how to be proud of my speech difficulty and be unapologetic. I entered the activism community about 7 months ago and Jeeja’s talks on disability, sexuality and gender really encouraged me as I began my journey in the activist circles about seven months ago.

A major part of me being able to accept my disabled body and my speech has been my initiative Revival Disability Magazine that works on the lines of disability, sexuality and intersectional ableism. With this, I slowly began to ‘unhide’ my disability. I ‘unhid’ that I’m disabled and unafraid, from friends, acquaintances to men on dating apps! At Revival, we aim to reclaim first person narratives of disability in India through the powerful tool of storytelling. We are changing the perspective and questioning why are we so afraid to portray authentic, experiences of disability? Revival’s stories give me life.

Whether it’s Ananay talking about how he navigated university spaces as a disabled student, whether it’s Devanshi’s story about resisting ableism in the form of audism, and Rakshit’s story of receiving a school education not inclusive of queer identities.

I would always perceive my disability as unattractive: I hated the way I walked, I hated my limp. I hated that my voice wasn’t clear all the time and I would start mumbling and embarrass myself when I was anxious. Most of all, I hated my left hand, the fact that I couldn’t straighten my fingers or function without my right hand to guide my left. Since childhood, I have heard my relatives telling me to “correct’’ my walk, to “straighten my fingers’’, to talk “clearly’’. Well, safe to say, these instances made sure that I internalized ableism within me, which is something that went on to give me anxiety, giving power to that nagging voice inside that said: “You’re just not good enough’’.

When I first came back from the ICU after my stroke, I would write on my dad’s palm to convey what I wanted to tell him, because I couldn’t talk at that point: My stroke had damaged my Broca’s area. I remember the first word I uttered after I started talking again after my stroke: it was my brother’s name.

One time when I was on a date with a man, and the waitstaff asked him instead of me, “What would she like to order?’’ and he said, “She can speak for herself, can’t she?’’ and I was hopelessly smitten, even though his gesture was something a decent human would do.

Since I’ve started working around disability rights issues, I have spoken on various webinars and livestreams. My routine before I speak on a webinar is simple: I put on loud music and sing to it so that my voice opens up. It also doubles up as a psychological exercise to help reduce my anxiety: Clearly, asserting my voice as I speak up now more than ever has been an act that is both personal and political.

‘Taking Up Space’ is a column where the author writes about her experiences of navigating so-called mainstream spaces as a disabled womxn. Not an attempt to preach or inspire, she attempts to have conversations on taking up space within her own reality, in conversations and physical spaces such as classrooms, seminars, grocery stores and by extension, in an ableist society rendering disabled individuals as persons with no agency of their own. 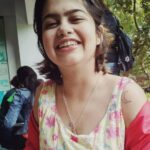 How I Overcame My Trauma And Found My Voice

What Exactly Is Happening In Chennai’s Engineering Colleges?