In and around the farms of the rural part of Raiganj town of Uttar Dinajpur district in West Bengal, the deplorable state of the women farmers became piercingly visible.
By Tathagata Bhowmik Dec 9, 2020 5 min read

The agricultural sector, like most sectors, has been seen as a gendered workspace for long. When we think of a ‘farmer’, it is almost always a man who pops up in our head. We associate the act of farming with a display of temerity, involving extremely strenuous and enervating activities. Years of social conditioning and rigid gender roles in a patriarchal society makes us associate physically exhaustive tasks with a male figure and outside the ambit of a woman. Women farmers are rarely categorised as ‘farmers’.

Structurally, it is difficult for a woman to own an agricultural land in India. 73.2% of rural women are engaged in farming activities but only 12.8% of them own the lands that they operate on as reported by the agricultural census. Not owning the land further prevents them from accessing institutional credits and subsidies. This has an adverse effect on the land tilled by the women farmers.

In and around the farms of the rural part of Raiganj town of Uttar Dinajpur district in West Bengal, the deplorable state of the women farmers became piercingly visible.

Also read: The Impact Of Customary Laws On Women Farmers In India

The women farmers start their day as early as 5am and have an occupied schedule that involves taking care of the children in the house, attending to farming activities, cooking, cattle rearing, visiting the markets to sell their produce and making sure their house is in order. The farming activities cover a wide range of physical involvement that includes preparing the land, selecting seeds, transplanting the seedlings, applying manure/pesticide and then harvesting, winnowing and threshing.

Quite often, while they work harder than their male counterparts, they are not involved in the decision making process of farming. They have been handed out conveniently charted subservient roles within the agricultural fields too and have been structurally conditioned to act as an aide to their husbands, most of who own the land.

The men in the women farmers’ families have migrated to urban cities in search of better prospects so the spectral responsibility of farming the generational land has now fallen upon the woman. Livelihood diversification is essential for rural families to escape the poverty trap, or simply improve their standard of living; and that is possible through migration. Migration is also a result of the worsening agrarian crisis. However, in such cases when the woman farmer assumes complete responsibility of the land, transferring of land rights needs to be seamless. The discriminatory terms of ‘cultivators’ and ‘labourers’ should be done away with and an all encompassing identity of ‘farmer’ needs to be instituted upon these women who are the cogs in the ‘feminisation’ of Indian agriculture.

The women farmers of Raiganj also highlighted the existing and glaring wage gap that they have been silent sufferers of. For a contractual farming work, a man is paid INR 250 per day while a woman is paid a mere 150 rupees per day. This discriminatory wage practice has perennially been a part of the villages in Raiganj which is a fact that can be extrapolated to every rural village in India.

Female workers are considered to be ‘weaker’ than male workers and the resulting wage gap is a direct effect of the prejudiced view of the daily productivity of both genders. The landowners exploit contractual workers by paying them wages lower than a subsistence amount, and the exploitation is further magnified in the case of women farmers. In the rural regions of Raiganj, farming has sustained multiple generations. Yet, the women farmers, especially, have found themselves stuck in the pool of wage discrimination, patriarchal role definitions, lack of institutional credit and access to subsidised fertilisers, the ever widening gap of land and asset ownership, and lack of recognition to entitlements due to a lack of proper budgeting specifically designed for the large population of female farmers.

India is a country where agriculture contributes to food security, nutrition and employment. The gradual ‘feminisation’ of agriculture has made it extremely important to recognise female farmers as land owners and provide them access to the same institutional remedies that are available to their male counterparts. Land ownership will also provide the women farmers a sense of security which in turn, will give them better protection against domestic violence. Yet, more often than not, the state and the agricultural land has failed to provide its women incumbents the armour they need to demand the political priority they deserve.

There is an urgent need to change the discourse in agricultural sector from the default ‘he’ and move towards a more inclusive environment. The gender roles need to be broken down and discarded to make way for a more participatory approach to socio-political discussions about agriculture.

There is a massive protest by the farmers across India as I write this, demanding the removal of the three draconian ‘Reformatory’ Farm Acts passed by the central government. They take away the assurance of a Minimum Support Price for farm produce and leave the farmers at the mercy of large, cash rich corporates who are known for generating super normal profit by exploiting the available labour market. While this protest rages on and makes our policy makers take note of the indignation of our farmers, the silent and invisible struggle that women farmers face every day cannot be forgotten. It needs to be taken up with equal zeal to pave the way for a woman to wake up, and call herself a ‘farmer’ with boisterous pride, and right.

Image Source: All photos as provided and clicked by Tathagata Bhowmik. 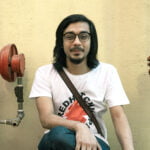 Tathagata Bhowmik is a writer and an independent singer and songwriter based out of Calcutta. He can be found on Facebook and Instagram.

My Visual Impairment And The Tale Of Two Extremes