The popular Amazon princess of the DC Comics, Wonder Woman, has quite an interesting origin story that, unfortunately, has been subjected to erasure and invisibility owing to its non-normative roots. The comic book’s origin story is inspired by a race of warrior women called Amazons in the archives of Greek mythology. Wonder Woman is an Amazon with special abilities who was born and raised on Paradise Island. Although heavily mainstreamed and popularized today, the history of the character’s origins remains purposefully archived. 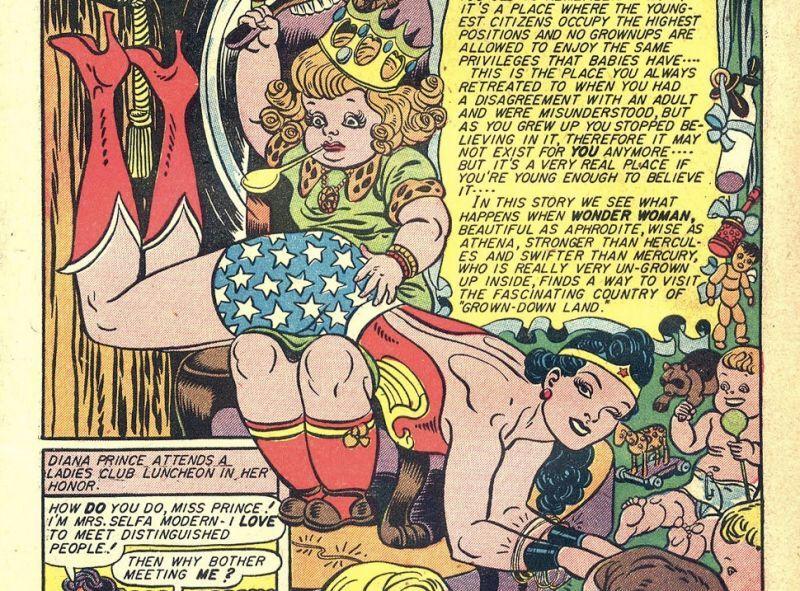 In his early issues of Wonder Woman, Marston was never covert in including fight tactics, torture techniques, and games involving binding, tying up, and spanking. Paradise Island was residence to a population of all-female Amazon warriors; the early comic imagery is full of homoerotic subtext with Amazons tying each other up with tight ropes and chains. Children’s comic book issues were filled with images of bondage and kink. Themes and motifs of female domination earned feminist brownie points and started larger conversations around sex kinks in a positive light. Early costume designs for Wonder Woman were similar to burlesque-like striptease costumes with tight fitted outfits and a strong sexual appeal, although the possible sexual innuendo was made invisible by painting the costume in the colours of the American Flag.

A closer look into Prof. Marston’s personal life reveals that apart from being a staunch feminist, he was heavily influenced by the suffragette and the feminist movements related to bodily autonomy of the 1910s. A revisitation of the popular comic book character reveals that early depictions took the form of radical political commentary and were inspired by first-wave feminist movements. Wonder Woman was often depicted breaking chains that represent “prejudice,” “prudery,” and “man’s superiority.”

Get premium content, exclusive benefits and help us remain independent, free and accessible.

For over 40 years, Marston lived with his wife and their lover in a polyamorous relationship. The movie Professor Marston and the Wonder Women by Angela Robinson explores bisexuality and desire between the throuple. Marston was heavily inspired by his wife and their partner to create “Wonder Woman.” Making its queer subtext more and more conspicuous, Marston used the phrase “Suffering Sapho!” as one of the early taglines of the character, based on the poems of Sappho of Lesbo. 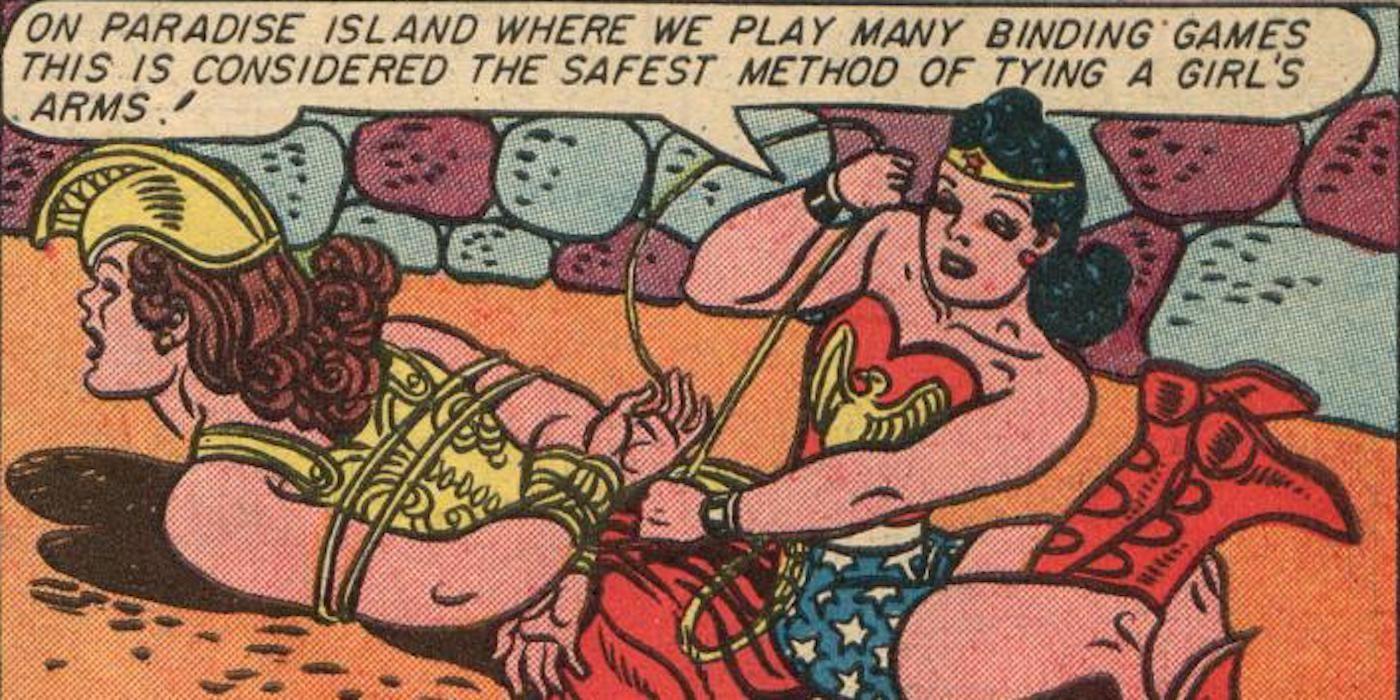 Post the early demise of Marston in 1947, all culturally subversive themes of the comic were stripped away; feminism and the kink were systematically removed from the issues. Additionally, to fuel a culturally consistent narrative of a female superhero, Wonder Woman was stripped of all of her powers and had acquired massive breasts while advocating for marriage and love. Not to mention the homoerotic appeal was completely removed from the comics, and the character of Wonder Woman was eventually crafted into the heteronormative idea of a good housewife rearing children. What went on was a complete erasure of any possible queer subtext and historical underpinnings from the character’s story arc, the lesser-known homoerotic transgressions in the comics are, to date, invisible.

What is not surprising is the queer erasure that takes place nearly in every form of mass and popular media. Queer bodies and works of queer artists have been sidelined through history and straight-washed to create images that are more likely to be consumed by a conservative heterosexual audience. Early issues of  Wonder Woman were evaluated to be an obvious threat not only to the mass conservative mainstream audience in America but to the heteronormative institutions of family and marriage. 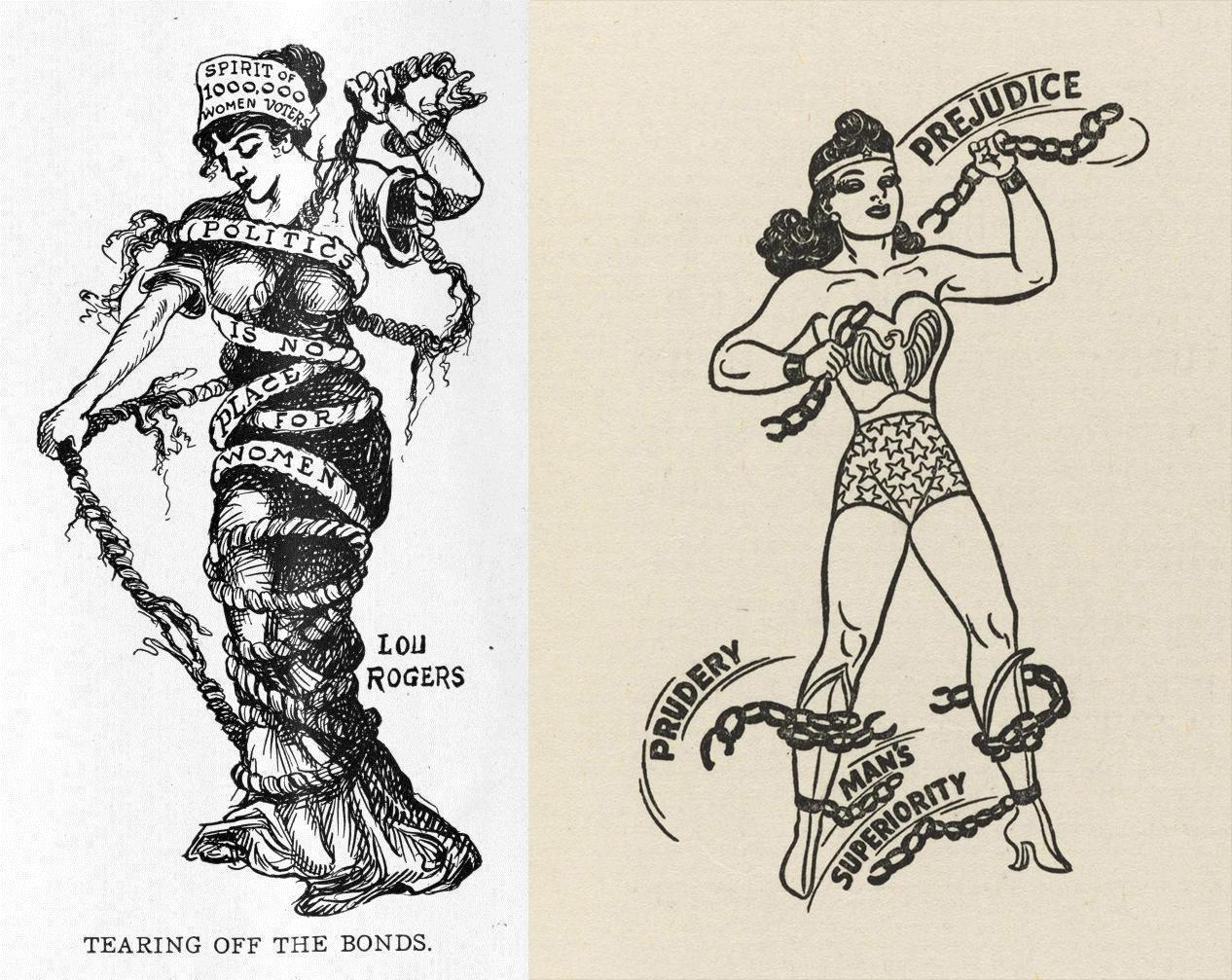 Similarly, Ayo’s character in Marvel’s Black Panther was stripped of any indications of homoerotic subtext by erasing the possibility of a possible lesbian relationship. Ayo has been shown in the comics to be engaged with a woman making her potentially Marvel cinematic universe’s first lesbian character.

​​​​Also read: Wonder Woman And The Refreshing Absence Of The Male Gaze

Queer representation has always been sidelined from mainstream superhero narratives, but there have been recent representational advances. The standalone MCU series Loki confirmed its protagonist’s bisexuality, making “Loki” Marvel’s first queer lead character. Another openly gay character from Marvel’s Cinematic Universe is Phaistos from Eternals. The queer representation project has just started to spread its wings into the superhero and comic book genre. Although a lot of characters indulge in playful tropes of homoeroticism and queer baiting such as in Captain America: The Winter Soldier, explicit queer representation is gradually on the rise, and there is hope to see more nuanced and multifaceted queer superheroes in the future.

Manan (he/him) is a research assistant in the Department of Psychology at Nolmë Labs, an academic research and science communication organization in Mumbai, India. Manan is an aspiring mental health practitioner and researcher in the field of psychology and counselling. His research interests include popular culture and minority politics. He can be found on LinkedIn or Instagram.

FII Interviews: ‘When Women Paint Women’—Gender And Female Gaze In The Paintings Of Artist...

Body Image Anmol Nayak - July 13, 2020 3
In the Indian imagination, an ‘Aunty’ is a middle-aged, usually fat woman who is married and has children. Young women, especially unmarried ones, either do not want to associate with the term or are expected to steer clear of it.

Book Review: A Leaf In The Storm By Lalithambika Antharjanam

Books Shilpi Seth - June 16, 2021 0
A Leaf in the Storm, a short story by Lalithambika Antharjanam, is a layered narrative that brings together the themes of violence, gender, and partition.

Most Popular Stories On FII

History Yoshita Srivastava - January 26, 2018 50
On this Republic Day, let us take a look at the fifteen powerful women who helped draft the Indian Constitution.

History Tara Anand - April 25, 2018 7
The Second Wave of feminism is usually demarcated from the 1960s to the late 1980s. It was a reaction to women returning to their roles as housewives and mothers after the Second World War.

ABOUT US
Feminism In India is an award-winning digital intersectional feminist media organisation to learn, educate and develop a feminist sensibility among the youth. It is required to unravel the F-word and demystify the negativity surrounding it. FII amplifies the voices of women and marginalised communities using tools of art, media, culture, technology and community.
Contact us: info@feminisminindia.com
FOLLOW US
© FII Media Private Limited | All rights reserved