The hilarious sitcom Masaba Masaba‘s second season is currently streaming on Netflix at the top of the TV series list. The mother and daughter in the series, Masaba, and Neena, who have both had stellar careers in entertainment, have also grabbed fans’ hearts in season one. Here, the women take on the role of a fictionalised version of themselves and enter that realm.

In addition to being enjoyable, the season serves as a mouthpiece for many concerns affecting women at that age. The fact that the series is dominated by women demonstrates how crucial it is to live your life on your own rather than attempt to control it.

If you are a working woman who is battling challenges like job pressure, relationships, body shaming, marriage, depression, family, parents, motherhood, or identity struggles, this show is for you.

The ailment recurs in the second season. Let the little tales dominate the narrative. She served as the face of a witty but nuanced examination of mother-daughter relationships and millennial disappointment. When Masaba Masaba‘s second season premieres, it does so with a splash, picking up just where the first one left off. Kartik Aaryan makes a comical brief cameo in it, setting the atmosphere for the turmoil that our heroine is wreaking.

The plot unravels with the protagonist turning 30. It is a terrible milestone in life for a single, independent, professional woman who prioritises her job over her family. No amount of new adult romantic drama with a chance encounter with a guy and a happily ever after can take away the awful, unsettling sensation of becoming older. In a desi household, being unmarried and taking pleasure in life as a woman without having to worry about raising a family is only a fantasy concept, as Masaba Masaba season 2 masterfully illustrated.

Masaba Gupta, a businesswoman and fashion designer who made her debut in the first season, blew the audience away in the second season after passing her acting audition with flying colours.

Thanks to the veteran actor’s equally talented daughter, Masaba Masaba season 2 will really feel sorely in comfort, playful, and truthful core appearances. The scene in which Masaba and Gia discuss Gia’s depression distinguishes the show. It improves the content’s relatability, accuracy, and coherence. The entire episode strongly conveys to the audience that having depression is not something to be ashamed of and that it is okay to seek professional help, in addition to discussing depression and its symptoms.

According to a UNICEF survey, only 41% of young Indians aged 15 to 24 believe getting help for mental health problems is beneficial. Filmmakers and online video platforms should undoubtedly take note of this kind of material because mental health is an important topic that requires open discussion without presumption or the idea of stigma.

As the plot develops and becomes more intense, the show highlights issues affecting women of various ages while also demonstrating how a woman can fix them herself. Along with the constant pressure to find a compatible man and start a family, Massaba is figuring out how to advance professionally. After finding a real person with the clarity and courage to follow her heart, she ultimately decides to freeze her eggs. The torch is here to hold up everything, along with the desire for family. This episode demonstrates how the patriarchal society views professional working women because they must leave their jobs in order to have motherhood or a family.

At the age of 30, half of all working women in the nation quit their jobs to care for their children, according to a study by the Genpact Centre for Women’s Leadership. Only 27 per cent of them return.

The series does discuss different approaches to becoming a mother, such as egg freezing, IVF, embryos, etc., which is not only admirable but also very realistic. Why rely on a man just to have babies and not actually have true emotions and compatibility if our technologies are developing so quickly? Why not women? This will lead to women becoming more self-assured, and they won’t let the pressure of the biological clock, finding a partner quickly, or entering into monogamy get in the way or lead them to make the wrong choice. Why should having children require you to give up your career?

Whereas Neena, the mother of Masaba, is trying to revive the old show “Fursat,” but she is having trouble because of mansplaining, (which is when a man explains something to a woman in a way that is perceived as patronising or disrespectful). When it comes to the film industry, men’s society is still the same for women. Only women age, and as they do, they feel the need to constantly be seductive, lusty, and all about their bodies, without regard to anything other than their own ideas and abilities.

Why does the entertainment industry accept older male leads but not older female leads? Is an actress all about her youth and body? Neena Gupta nails this perspective and decides to follow her heart and do it her way and ends up getting her own show on Netflix titled “Be Honest with Neena Gupta.”

Therefore, on a scale, Masaba Masaba is not only enjoyable but also very uplifting because it challenges a number of sexist stereotypes while also being more plot-driven and advancing the plot. Despite being a fictionalised account of Masaba Gupta’s exciting life, the television show is described as a biographical drama that is based on her life. The fact that season 2 will examine Masaba’s life after the events of “Hot Mess” in the last episode doesn’t lessen how entertaining the series has been so far, though. This idea appears to have been the foundation of the show, and women in particular, who are still scrambling to figure out their existences, will find it very appealing.

The show also questions body shaming and fashion prejudice and why a specific body shape and size are so important in fashion. The goal of fashion is to boost your self-esteem rather than make you despise your body. Again, what will draw you into the narrative is how the show features teenage girls’ identity crises and traumatic experiences caused by their excess body weight as its launching point.

At the end of the series, the message is to instil in girls a sense of body confidence and beauty, as well as the notion that beauty comes in all shapes and sizes. So ladies, dance and slay with your style to enjoy the flirtatious decade of your thirties. The web series’ plot strongly promote feminism and are extremely relatable to many of the women of that generation. Masaba Gupta’s endearing natural acting debut is also winning over hearts. She is establishing herself as an actor because she is so striking and natural in her delivery.

Also read: A Look At 6 Popular Shows & Their Feminist Politics 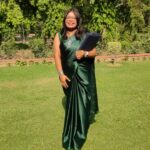 Can Bollywood Award Shows Be A Site For A Campaign Like Time’s Up?

What To Do When A Client’s Behaviour In Therapy Becomes Unacceptable?