HealthBody Image Making Up Your Mind About Make-Up And Feminism

What does feminism say about make-up?
By Prerna Geeta Manian Jun 18, 2015 4 min read

Feminism condemns the acceptance of patriarchal standards of routine activities, and tries to de-gender, as I would like to put it, actions of a human i.e. try to de-contextualise a particular action from gendered norms.  This is an aspect of feminism which is highly misconstrued by the supporters of feminism too, which in turn leads to a complication within feminist circles about what we really intend to do – condemn the act or condemn the norm?

For example, Carol Rossetti’s drawings made huge waves on the internet and were shared among men, women, others inordinately. A woman’s choice to shave or not to shave, to apply make up or not, was her ‘choice’ or ‘desire’ as a human. But, most of the times the reason this post was shared by people was sadly because their meaning-making differed from what these drawings actually intended to instill- freedom. Most of the people thought that this was a movement against make-up, or shaving. Many women shared these photos with their own messages which defeated the purpose then and there – “I will not shave because patriarchy wants me to”, “Applying makeup is hiding my insecurities while I am a free woman”. Unfortunately, this was not the meaning of this movement, rather it is not what feminism intends to say.  It is against the codification of routine activities, the very normalisation of it.

To put in simple words, as often these movements are convicted of being too complicated for the public to understand (i.e. not understandable to those who need it the most), feminism is not against the act of makeup nor is it against the act of removing hair from your body, or against trying to follow a cosmetic and fitness regime. No movement, tells you to go against your wishes. And definitely not feminism. Because this movement started on the ground of following one’s own choices and not accepting a set of arbitrary rules set by others.

So what exactly is feminism against? For this, we need to look up about how this very basic human business of applying cosmetics and using an epilator came into question.

Lipstick feminism hinged upon the claims that using cosmetics and wearing ‘alluring clothing’ empowers a woman while the feminists who were against this said it is again giving into patriarchal norms and claiming an identity of a woman as set by patriarchy. One side was of the opinion that women should stop trying to appeal to men by applying makeup. But if we go inside the history of men and makeup, it reveals that men never forced women to wear makeup, rather they were against it, and never made it a standard of beauty. It was women themselves, who, through their own private circles, forced themselves and others to think that they were imperfect and needed to be ‘fixed’. And this facet of cosmetics, ‘concealing of imperfections’ has now also been accepted by men through the advertisements of men fairness creams and the likes. In all this brouhaha one forgot that it is gender roles which were coming into play- men never applied make up because it made them, according to the norms, ‘effeminate’, while gradually they turned to concealers and other products for the same reasons women had often turned towards make up.

But as feminism worked its way through, it was a fight for equality, and moreover, ‘choice’. Choice not in its anarchical, overruling rules aspect, but doing what one feels like without hurting the individuality of others. Applying make-up, following a cosmetic regime, is about the choice of the individual and the individual alone, and if they do it, let them do it. What feminism tells you to ask yourself why are you doing it? Are you doing it because you feel it is how you will be accepted in the society? If yes, feminism comes and pats you on your back and tells you that you are not a candidate for a college entrance exam to be accepted. By virtue of being a part of this society you are accepted naturally, and no amount of makeup can diminish or enhance that fact. Do it because it gives you happiness, not for any other reason whatsoever.

Thus if you are not applying make up thinking it will make you more radical a feminist and are resisting applying a little rouge before you step outside for a party and feel uncomfortable; you have gone wrong. Or you are applying tons of make-up to make a statement of an empowered woman whose kohl smeared eyes and foundation defines her freedom- you have gone wrong again. The very discomfit in the first case shows how you have given up your own free will, and the second shows how while trying to disregard a rule, you have created a new one. What actual feminism tells you is to have no gendered rules to what you do- if a man applies make up, he is not a woman, and if a woman applies make up, she is not a slut. They are two individuals, who are doing what they want.

This politics of ‘freedom to do what you want’ is also contested in feminism and thus the above theory is often kicked away. But feminism, along with telling you to follow your desires, also shouts for equality. And equality not of acts that involve hurting others, or ‘getting even’ with the other sex. It is equality of the freedom itself, and that can only happen when we stop seeing basic activities in gendered terms. So when it comes to makeup and shaving, conclusively, feminism tells you to do or not do it because you want to, not because your gender was prescribed you to go with or against it.

Read more here on feminism and make-up: Feminism And Make-up: Do They Go Hand-In-Hand? 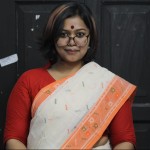