Interviews “Not Same-sex Sexuality But Modern Homophobia Is The Western Import”: Ruth Vanita

“Not Same-sex Sexuality But Modern Homophobia Is The Western Import”: Ruth Vanita

Recently there has been significant press coverage of landmark legislative changes relating to same-sex marriage in Western countries. From Facebook introducing temporary profile picture settings to show support for such moves to the Lok Sabha voting against yet another move to decriminalise homosexuality, Indians haven’t been cut off from the developments regarding LGBTQ rights. However, among many, including right-wing fundamentalists, it has led to the development of the idea that same-sex desire is a Western concept. 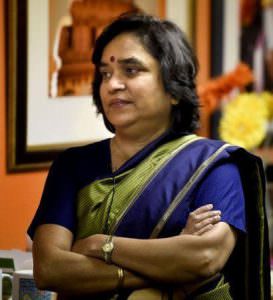 I chatted with Ruth Vanita to understand the long history of same-sex love and marriage in India and how academic research can be effectively used for activism. Born and educated entirely in India, Ruth taught for 20 years at Delhi University, and now teaches at the University of Montana. She is highly regarded in academic circles for her pioneering work on South Asian sexuality and literature. Her books such as Same Sex Love in India, that she co-edited with Saleem Kidwai, and Queering India, broke fresh ground in gender studies by showing that India has a long tradition of same-sex desire and that therefore homoeroticism does not belong exclusively to the West.

In fact, she has consistently maintained that rather than homosexuality, it is homophobia that India has inherited from the West through colonisation as she argues in her recent book Gender, Sex and the City: Urdu Rekhti poetry 1780-1870. She is also the co-founder of Manushi, a feminist magazine that she co-edited from 1978 to 1999, during which time she successfully showed how academic research and activist zeal complement each other.

SK: You have often focused on same-sex love in the pre-colonial era. Why is it important to go back to the past to talk about the present?

RV: The distinction between present and past is an artificial one; when does the past end and the present begin – ten years ago, ten weeks ago, ten minutes ago? Even as we speak, the present becomes the past. Colonialism wiped out many but not all memories of our pre-colonial past. The memory of same-sex love is just one example. A large number of educated Indians think that same-sex love is an import from the West or from the Middle East and that it was unknown in ancient India. Even today, South Asian scholars tend to focus almost entirely on the colonial and post-colonial periods. Colonialism is just a recent blip in the long history of the subcontinent. We tend to exaggerate its importance. Researching the history of ideas of sexuality in Indian literatures was a revelation to me because it opened my eyes to so much more than that topic. Reading the epics, the Puranas, the katha literature, and, more recently, 18th-century non-mystical Urdu poetry gave me glimpses of the amazingly sophisticated and diverse debates in Indian literatures on everything under the sun – from vegetarianism to gender and sexuality to the nature of knowledge and communication. SK: Your work on lesbian desire and ‘uncovering’ women’s histories has been pioneering in the field of gender studies. Would you say that the contemporary LGBTQ movement in India lacks adequate discussion of women’s sexuality?

RV: No, I would not say that. I think the LGBT movement (which has many branches and groups all over the country) does include discussion of women’s sexuality. It has also pushed the women’s movement in general to discuss sexuality much more than it did earlier. When I was active in the Indian women’s movement from 1978 to 1991, as the founding co-editor of Manushi, sexuality was discussed almost entirely in terms of violence, rape and harassment, as a burden rather than a source of pleasure. To the extent that this has changed today, it is largely because of the LGBT movement.

SK: Recently same-sex marriage has received important legislative support in Western countries leading many to believe that it is a new Western development. How far would you agree with this perception?

RV: My interest in same-sex marriage in India grew out of reports that regularly appeared in the Indian press from 1980 onwards of young female couples who either got married or committed suicide together. They were almost all non-English speaking girls from low-income groups who had no contact with any feminist or gay group and did not use words like ‘gay’ or ‘lesbian’. This began long before the movement for same-sex marriage in the West. And at the same time young male-female couples were also eloping to marry or were committing joint suicide. I wanted to find out how same-sex couples developed the idea of getting married even though the movement had not put forward such a demand. Clearly, then, advocacy of LGBT rights does not arise from Western influence but from people’s own felt needs and from strands in our own traditions.

SK: Do you think recent developments in the West have resulted in the perception that advocacy of LGBTQ rights is a Western ideal that developing countries need to emulate?

RV: There are all kinds of misperceptions afloat everywhere in the world, not just in India. One such long-standing misperception is that homosexuality itself is a Western import. My research, among others, has demonstrated that not same-sex sexuality but modern homophobia is the Western import. In the US there is a misperception that LGBT people want ‘special rights’. In fact, LGBT people simply want the same rights that are guaranteed to citizens of democracies, and the same human rights guaranteed under UN documents to which India is a signatory. For example, when a man or woman who is a citizen (or in India, is of Indian origin) marries someone of the other sex (even if they marry the day they meet) the spouse automatically obtains a number of rights, for example, the right to live in the country on a permanent basis. On the other hand, two women or two men may have lived together for decades and still they obtain none of these rights. So if there is a perception that advocacy of LGBT rights is a Western ideal that is a misperception. LGBT people are entitled to their civil rights and human rights. This is a requirement of democracy and has nothing to do with east or west, north or south. South Africa guarantees these rights; so do Brazil, Argentina and Nepal. Japan and China decriminalised same-sex relations before the US did so. Our obsessive focus on the West results in a defensive desire to simultaneously imitate the West and to defy it. Instead of endlessly agonising about West and East as if they are completely incompatible, it makes more sense to focus on the requirements of democracy.

SK: What does South Asian same-sex desire contribute to the global discourse of LGBTQ rights?

RV: There is a long history in Indian literature of discussing same-sex relationships in a range of registers, from a non-judgemental exegesis to an ascetic-oriented mild disapproval of all non-reproductive desire, to a joyful celebration. We have a marvellous trove of writing about same-sex relations, in Sanskrit, in Bengali, in Malayalam, in Urdu, in Rajasthani, in Hindi, and in many other languages. Much of this literature has not been translated, and when it is translated and widely read, it brings different ways of seeing, for example, nowhere else in the world are there stories paralleling the fourteenth-century Bengal narratives (in Sanskrit and Bengali) of two women producing and raising a child together with divine blessing. Urdu poetry produced in Lucknow in the late 18th and early 19th centuries is unique for its rich lexicon of terms for female-female unions and for its lively descriptions of these unions in everyday settings.

The LGBT movement today also expresses itself in ways specific to Indian culture, for example, when transgender activist Abheena Aher performed the iconic song, “Pyar Kiya to Darna Kya?” (When one has loved, why should one fear?) from the film Mughal-e Azam, on the Global Day of Rage 2013 in Delhi, the meaning of that moment and the rapturous way it was received by the crowd, was not translatable. It worked because of our long literary and cinematic history of celebrating love’s defiance in particular ways. We have grown up with stories of lovers who died rather than be separated – it is not a long stretch from Heer and Ranjha or Salim and Anarkali to the young cross-sex and same-sex couples who have been eloping to marry in temples or committing joint suicide together for decades all over the country.

SK: How can academic work be used for activism that reaches wide groups of people?

RV: Academic work that avoids insider jargon and that highlights primary sources rather than one’s own cleverness is most likely to be accessible to everyone. When working at Manushi I learnt to convey complex ideas in simple language that anyone can read. I have never been able to unlearn that way of writing nor have I used the language of theory even though using it would probably have opened many career opportunities to me. Also, I prefer discovering and focusing on positive features of every tradition rather than negative ones. Modern culture in general and academic culture in particular tends towards tearing things apart, which is very easy to do. In order to build, however, and to reach people, we need to critically appreciate our common heritage. Rumi suggested that in the garden of the world we should look at flowers, not thorns. In a similar spirit, Tulsidas opens his epic by bowing to every being in the world, including his enemies, seeing them all as manifestations of Ram.

Also read: 15 Books You Must Read To Understand Same-Sex Sexuality In India

Sneha Khaund is pursuing an MA in Comparative Literature at SOAS, London, on a Commonwealth scholarship. In 2015, she graduated from St. Stephen’s College, Delhi, where she fought against hostel curfews for women. She is very passionate about making academic work accessible to non-academic readers. You can follow her on Twitter @Pakhee.

Why Do Women Living Feminist Lives Have A Problem With The Feminist Tag?