Instead of being the shy, demure and submissive bride, it's time to question the patriarchal norms and be the argumentative bride.
By Sayantika Mandal May 5, 2017 4 min read

An era has passed since Tagore had created the character of Mrinmoyee, which Satyajit Ray immortalised in Teen Kanya, an indomitable spirit who dares to rebel against patriarchy by fleeing her in-laws place after marriage. Even though she comes back, she reiterates that it is “my wish“. In the 21st century, we would’ve expected more of such Mrinmoyees to be accepted and cherished instead of insipid, hysteric and gaudily embellished brides of the TV soaps that dominate the evenings of a common Bengali household.

Despite being a state that boasts of its progressiveness and often looks down upon other states, Bengal perpetrates the same stereotypes that the rest of so-called “backward” states (labelled by progressive Bengalis) indulge in. Coming back to Mrinmoyee.

Once again, the idea of the shy, demure bride, smiling and crying at others’ will, is so deeply etched in the psyche of the urban middle class Bengali society that it shocks them to find another Mrinmoyee in the crowd. In the 21st century, when the bride is educated, has a college/university degree, is often working and handling responsibilities at the workplace with dexterity, Mrinmoyees should be the norm. Not the exceptions. And they should be cherished, not frowned upon or silenced.

The submissive bride often undertakes this role – one of “compromise” and “adjustment” – in order to “keep the peace”.

Why aren’t Mrinmoyees the norm? The submissive bride often undertakes this role – one of “compromise” and “adjustment” – in order to “keep the peace”. However, in doing so, they are upholding the obnoxious, derogatory, patriarchal practices, casting the fights of our feminist foremothers in vain.

Jorowar Jhumko – a Bengali TV serial where the young bride is adorned with heavy bridal jewelry and makeup on a daily basis, and behaves in a nauseatingly coy manner.

As a child, when I had heard the story of Ramayana numerous times, I wondered why Sita did not undergo the agnipariksha the second time, instead of refusing Ram and returning to the Earth. If she had obeyed Ram, it would have been a happily-ever-after. At the age of six years, I had no concept of self-respect and expected all tales to end with happily-ever-afters.

We have come about four thousand years since the age of Ramayana, and it is shocking if the brides of this age fail to live up to the fiery spirit of their predecessor. Your self-respect lies in your identity, your right to voice your opinions, your right to follow your ideals and not blindly obeying whatever every other relative says. So speak up, it’s your wedding, your day.

Also Read: Marital Inequality – “Tradition” And The Subjugation Of Women

Well, do I hear mutterings about following culture and tradition? Tradition and culture change with time. We used to have Gandharva marriages in the Vedic period, nowadays it is treated with disdain. Child marriages and Sati had been common once, nowadays they are illegal and punishable offences. Tradition cannot be defended when it becomes the dreary desert sand of dead habit and submerges the stream of reason.

We should have the courage to change tradition. Speak up, argue, fight, stand up to your ideals. Are we considering hurting the sentiments of people? Well, what about society hurting our sentiments, silencing us as a stooge of its own interests to perpetrate the order of patriarchy? I believe I have every right to voice my opinion about my marriage, not just choosing what to deck myself with. It’s time we break the myth of the demure bride decked up in finery. We are minds with independent opinions and we can argue with reason. So, time to speak up.

We should have the courage to change tradition.

Many incidents prompted me to write this post. Time and again, numerous people have hinted that I should not be outspoken as a bride. But I simply said it is my wedding and I will speak.

Many are going to suggest that you are going to belong to a different family after my wedding. Throw a fit of anger. Express your outrage. Make them take back their words. Make them realise that your in-laws are an extension of family, I am not changing one for another. Further, I do not belong to anybody. I am not a slave. Moreover, even our legal system has recognised the rights of the daughter in the share of property even if it is not willed, if that’s what you mean.

The idea that I am being severed of my parents only because I am getting married stinks of that sickening system of patriarchy, and had I or my parents or my fiancé believed in that, none of us would have agreed to marrying at all. Finally, the rituals and texts which proclaim the same are absolutely stupid, belong to the Stone Age and should be discarded. If you still indulge in it for tradition’s sake, treat it with comic humour instead of believing in it.

Time and again, numerous people have hinted that I should not be outspoken as a bride. It is my wedding and I will speak.

Don’t let anyone force you into doing anything. Change the rituals if you want to. Refrain from wearing gaudy jewellery if you do not want to. Keep it simple if you want to. You decide. Be the argumentative bride. One of the greatest icons of modern India, Amartya Sen, has highlighted the importance of public debate in Indian traditions in his celebrated The Argumentative Indian, so we should follow his steps and question our rituals as well. 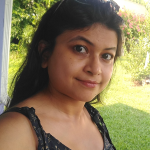 An avid reader and aspiring writer, Sayantika Mandal graduated with honours in English from Presidency College, Kolkata, and has a postgraduate diploma in journalism from IIMC, New Delhi. After a two-year stint as a journalist in Hindustan Times, she is currently pursuing her master’s degree in English from IGNOU