SocietyNews No Lust, No Non-Veg: Government’s Advice To Pregnant Women

According to a booklet compiled by the Central Council for Research in Yoga and Naturopathy (CCRYN) under the Government’s Ministry AYUSH (Department of Ayurveda, Yoga and Naturopathy, Unani, Siddha and Homoeopathy), the secret of successful pregnancy and healthy babies lies in abstinence from emotions like desire, anger and lust, and saying NO to a non-vegetarian diet.

The Mother and Child Care booklet comprising of these ridiculous do’s and don’ts distributed recently at an event presided over by the Union Minister Shripad Naik, was issued as a precursor to the World Yoga Day to be celebrated on June 21st. The suggestions issued in the booklet have raised much brows since, and were later defended by CCRYN by calling them mere ‘suggestions’, and not prescriptions. 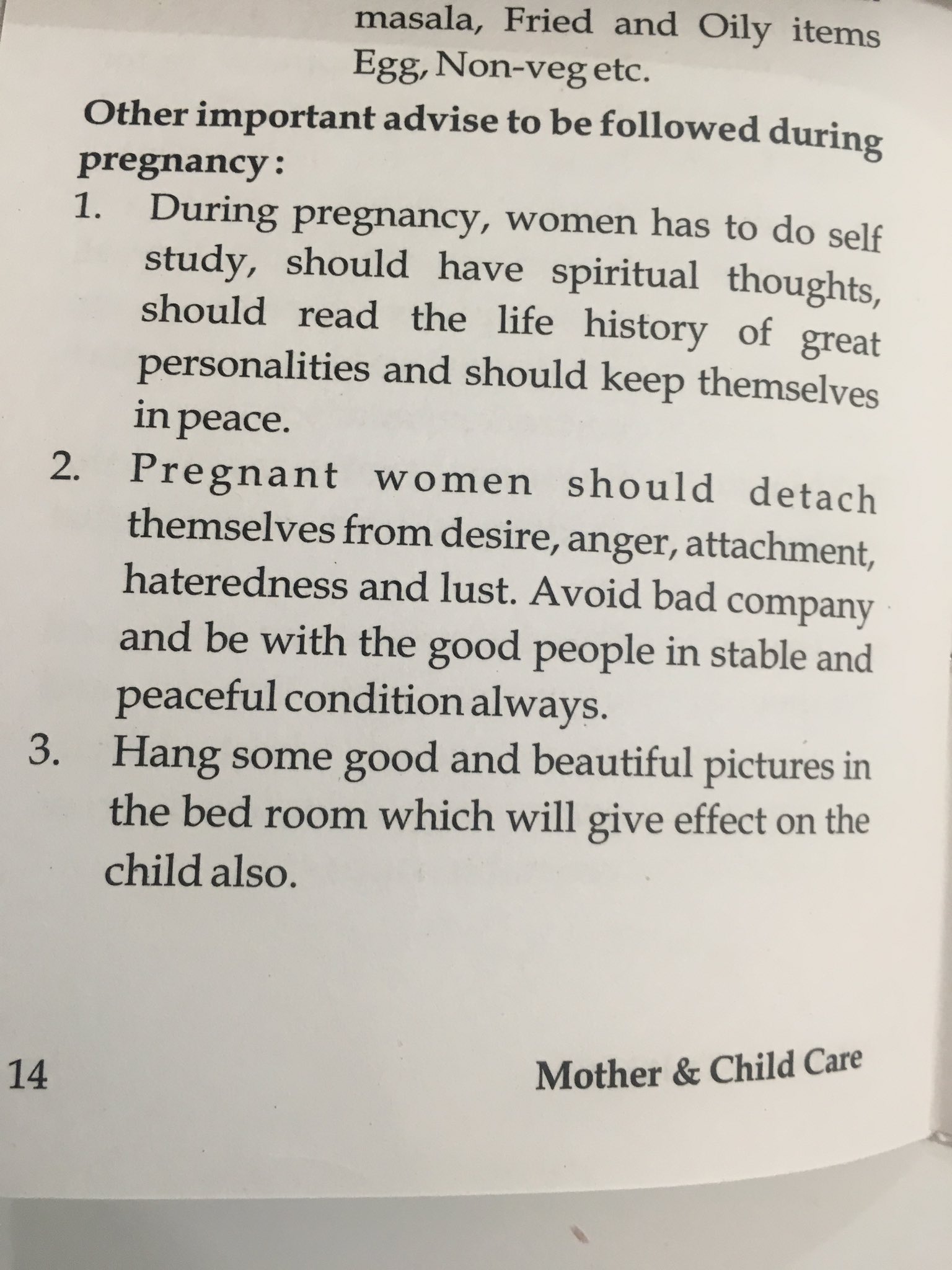 These suggestions are extremely problematic, both from a scientific and an ethical point of view. While women need a rich source of protein when they are pregnant, meat offers the cheapest choice and easiest access. Advising women to then adopt a vegetarian lifestyle when pregnant is not just unscientific, but also elitist as the rich can afford a vegetarian protein-rich diet inclusive of soya and a variety of fruits, but not the poor. These ‘suggestions’ propagating vegetarianism without the concern for economic feasibility, while maligning the other non-vegetarian viable options thus fail on ethical grounds as well.

Another proposed suggestion of the booklet says that pregnant women should “detach themselves from desire, anger, attachment, hatredness, and lust.” While the psychological effects of a woman’s state of mind during pregnancy are important, the inclusion of ‘desire’, ‘attachment’ and ‘lust’ in the list of feelings to avoid makes zero sense. Infact, a heightened emotional state is commonly accompanied with pregnancy, and is very much real and sometimes unavoidable without proper help and support. The ‘attachment’ that women are told to avoid in this booklet, is in fact an essential coping mechanism for anxiety and worry.

Furthermore, advising women to avoid lust seems to have become the motto of a saintly India. While some politicians illogically celebrate celibacy, this booklet specifically reprimands pregnant women from possessing any lust, completely ignoring the fact that pregnancy is often accompanied by a heightened sexual drive. While in the case of complicated pregnancies, and sometimes in the first trimester, couples are advised to be careful, the onus of a healthy baby and controlled sex does not lie with the women alone, as has been made to look in this booklet.

Mr. Naik conveniently brushed off any remark about these nonsensical suggestions by saying that the booklet does not tell women to abstain from sex, but only to avoid lust. Similarly, according to BJP leader Shaina NC the booklet only gives suggestions, and since nobody is being forced to follow these rules, she does not find them problematic.

The lax attitude of the government in monitoring its booklets, and the ambiguous and shallow remarks of its leaders shows how issues around women and children are trivialised. In a country like India, where the Maternal Mortality Rate (MMR) despite falling, stands at a massive 178 in 100,000 live births, which in absolute number means the death of around 55,000 women annually due to preventable pregnancy related issues, these incidents are one of the reason for the terrible state of affairs. Instead of improving health facilities, and ensuring that pregnant women get the right medications, environment and nutrition, these silly and hazy doctrines only take over the popular media and undermine any serious discourse that might be existing (or even has a bleak possibility of existing) around the topic.

This isn’t the first time that known and dignified sources have given and even encouraged ill-thought-of and unethical propositions. In May 2017, the Garbh Vigyan Sanskar project of the RSS’s health wing Arogya Bharati, had claimed the production of fair, tall, and essentially customised babies by ensuring consummation according to planetary configurations, followed by complete abstinence, and procedural and dietary regulations. According to Dr Hitesh Jani, the national convener of Arogya Bharati, “If the proper procedure is followed, babies of dark-skinned parents with lesser height can have fair complexion and grow taller.”

Similarly, Baba Ramdev’s Putrajeevak medicine allegedly promised the birth of a male child. Even though he denied any such accusations, claiming that the medicine targets infertility and not sex selection, but ramdevmedicines.com, a website selling Putrajeevak stated, “It is an extremely effective herb that has been used for ages in ancient India to rectify the defects in a woman’s body to make her conceive. According to ancient texts, it is also helpful in conceiving a male child.”

From unscientific claims to overtly racist and sexist ideas, pregnancy and pregnant women have long been belittled with problematic theories. While the focal interest of health care organisations should be the betterment of medical services, incidents like these make it seem like a far fetched dream. They highlight the facade that exists in the pretext of health care services. While the situation demands stern and profound measures over these cases, the fact that these remarks so often, come from the government itself makes the situation especially vulnerable.

Tagged Under: Central Council for Research in Yoga and NaturopathyMinistry of AYUSHMother and Child Care bookletpregnancypregnant women