Episodes of racism against the North-East Indians seem to have no end, as a Meghalaya woman faces racist humiliation in Delhi Golf Club.
By Aqsa Khan Jun 28, 2017 3 min read

Episodes of casteism and racism, backed by a privileged umbrella of ignorance, form a daily reality for a large section of the society. A recent episode at the Delhi Golf Club highlighted a similar ignorance harboured against the North-Eastern states of India, and the prejudices and injustices that ensue because of it.

A woman, named Tailin Lyngdoh, belonging to the Khasi community of Meghalaya was allegedly told to leave the Delhi Golf Club in the midst of a lunch where she was an invited guest. The reason given by the manager, Ajit Pal, accompanied by a woman named Sumita Thakur for such disrespectful treatment, was that Lyngdoh’s outfit to them, looked like that of a maid.

Tailin Lyngdoh who works as a governess for Dr Nivedita Barthakur Sondhi, an honorary health advisor to the Assam government, was wearing a Jainsem, a traditional attire of the Khasi community, that the club authorities took an instant disapproval of. When questioned by Dr. Barthakur, they unabashedly replied that she (Lyngdoh) looked different, was dressed like a maid, and looked Nepalese, reports The Times of India. She further added that they left the club when no-one else around them intervened, and now seeks to bring the matter under the legal eye. It is important to note that Lyngdoh has travelled the world from London to UAE wearing a Jainsem, but has never suffered this kind of a humiliation before. Later that day, Dr. Barthakur made the following public post on facebook:

The event highlights the many wrongs plaguing the mentality of most privileged Indians, and the ignorance about their own country and traditions. While the club members did not recognise the traditional outfit, they also did not feel a need of offering an apology on being told (rather, educated) about it. Though it is not a job of the minorities or underprivileged people, or their allies, to be educating the ignorant elite about their own country and its various societal structures, even trying a hand at this seems to be making no difference. The ignorance is often accompanied by a nonchalant attitude towards anything that is not mainstream urban.

Also read : Living In Delhi As A Northeastern Woman: Do My Small Eyes Make Me Less Indian?

A similar scenario was recently witnessed when a South Delhi Jazz Club, named Delhi’s Piano Man Jazz Club was all set to host a musical evening with a band named ‘Bhangijumping’. The casteist and abusive connotations of the name of the band escaped them completely, and even the early online rebukes seemed to have no effect, but rather furthered hate comments targeted at the Dalit community. It was only when the matter escalated to a large section asking for a boycott of the club that Arjun Sagar Gupta, the owner of Piano Man decided to read-up on the Bhangi community, and later agreed that it was a huge mistake not doing so earlier. 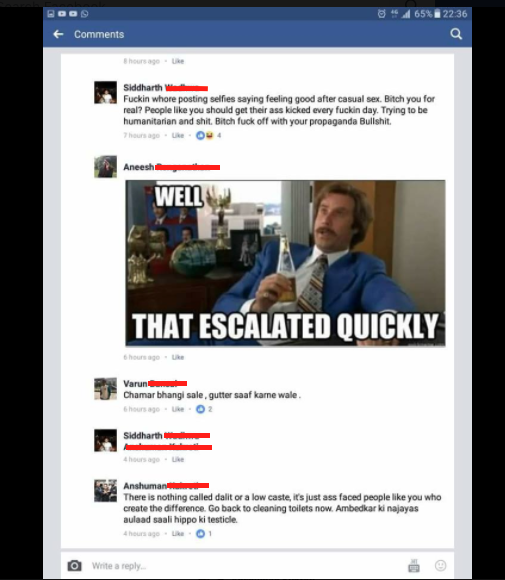 A screenshot of the comments section. (Image from www.huffingtonpost.in)

However, incidents like these make it clear that such ‘mistakes’ are not out of innocence, but an underlying uncaring attitude that is a blind eye to its elitist, hypocritical nature. Even when it counters complaints of discrimination and prejudice, it does so by making them seem as merely incidental. So when the Delhi Golf Club authorities decide to show a woman the door for wearing a particular attire, it can be looked at as a ‘small’ incident, that should draw no loud attention, despite its patronising and discriminatory reasonings.

Another disdainful facet of this incident at the Delhi Golf Club is their easy assumption of there being a particular look of the dresses worn by domestic helps, and the seemingly obvious treatment of seclusion given to them. The said place, like may other elite zones, is probably harboured by people who find it absolutely okay to not allow their helpers and servants in their ‘grand’ vicinity. The incident was a further example of the generalised assumption of women household helps looking a certain way, owing to a large number of domestic helps being female. One tends to wonder if the authorities would have come to such rapid conclusions for a man looking different, and addressed them so harshly and yet so easily.

While the government tries to instill a feeling of nationalism by urging traditional outfits, we wonder how successful any of these efforts are when working out of governmental offices and their native lands, to the real world with the status quo is unequal and biased. The incident at the Delhi Golf Club, is a clear example of the interplay of racism, classism and sexism and how it is very much real, and shamelessly operative all around us.

Thoughts On The (Un)Contested Ownership Of My Body