SocietyNews Byculla Prison Incident And The Treatment Of Women Convicts

In an inhumane incident at the Byculla prison in Mumbai, a woman convict named Manjula Shetye was brutally beaten and sexually assaulted by the jailors.
By Aqsa Khan Jun 29, 2017 3 min read

In an inhumane incident at the Byculla prison in Mumbai, a woman convict named Manjula Shetye, 38, was brutally beaten and sexually assaulted by the jailors. Shteye was a warder (inmate made responsible for day-to-day needs of the prisoners) in the Yerawada Central Prison in Pune and was later shifted to the Byculla jail as there was a shortage of warders in the latter.

Hindustan Times reports that on June 23, Shetye complained to the jailors about some missing eggs and bread in the prisoners’ ration. She was called to the jail officer Manisha Pokharkar’s private room. The witnesses reveal that they heard Shetye scream in pain before she returned to the barrack.

Soon a group of jailors came to the barrack, stripped Shetye, and beat her brutally. They even inserted a lathi (wooden stick) in her private parts. She was left bleeding and no help was offered by the jail authorities. It was after she fell unconscious that she was taken to the resident doctor at the jail who immediately asked for her to be transferred to JJ Hospital. Shetye died at the hospital.

Five other inmates have recorded their testimonies with the Nagpada police, alleging that Shetye’s ill-treatment did not happen just one day, but was going on since many days, and ultimately resulted in her death. They accused the jail authorities of disliking Shetye’s popularity amongst other inmates. Shetye took good care of the prisoners under her and was hence liked by her inmates. This seemed to not sit well with the jail authorities who allegedly targeted Shetye for trivial reasons.

Also read: Gender Disparity At The Supreme Court Of India

The death of the convict was followed by riots within the prison with around 200 women convicts protesting the assault and the following death. Amongst the 200, was the former media entrepreneur Indrani Mukherjee, the main accused in the murder of her daughter Sheena Bora, who has appeared before the court alleging that she was herself beaten by the authorities after having witnessed the cold-blooded murder of a fellow inmate. 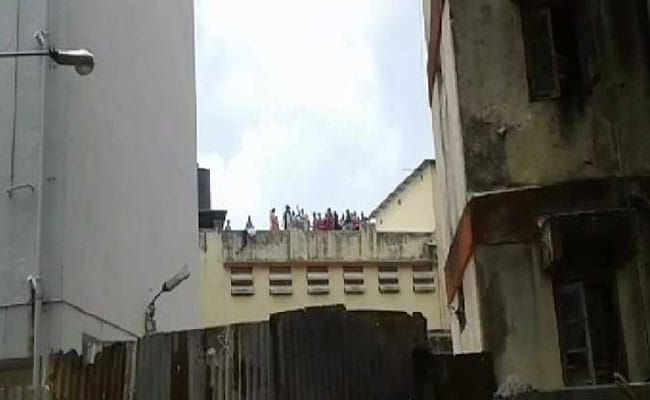 Prisoners rioting after the murder of Manjula Shetye. (Image from ndtv.com)

Shetye’s death has incited questions about the barbaric treatment of female convicts in Indian prisons. While the convicts are sent to jail to serve punishments for their crimes, the treatment accorded to them often goes beyond the legal imprisonment, especially for women. In an interview given by Angela Sontakey, a prisoner in the Byculla jail, in 2016, she revealed the differential treatment given to female prisoners. She alleged that women were told to remove their footwear, and cover their heads with a dupatta or pallu before they appeared in front of the superintendent of the jail. Women dressed in salwar kameez would often be told to change to sarees. She alleged that in the Nagpur prison she had previously been in, women were hoarded in a corner whenever a man was to visit. She also revealed how the authorities often stole from the inmates, and strip searches were organised despite them not being legally due.

In a more recent incident, a woman prisoner at Central Prison for Women in Tumkur attempted suicide after video clips of the prisoners were released by the media, without the prisoners having any knowledge of the clips being recorded. They accused a man named Muralikrishna, the husband of a woman constable Uma, of shooting the footage of the women prisoners cleaning the premise and handing them over to the media, without their consent. They also accused the jailor of allowing the visuals to be shot.

Also read: The Women Of Our Courts: Where Are They And How Many Are There?

The death of Manjula Shetye, the allegations of Indrani Mukherjee, and previously noted accusations of women convicts in Indian prisons has raised doubts about whatever that goes on within the walls of the prison house. Meanwhile, the Maharashtra State Commission for Women has sent a notice to the Additional Director General, Prisons and the Special Inspector General, Prisons to appear before the court with a report on the Byculla prison case.

However, this incident cannot be viewed in seclusion and demands a more serious study about the treatment of convicts. While the nation turns to the legal system for rightful punishment for the wrongdoers, such crimes happening within the custody are definitely more heinous.

Consumerism, Environmental Degradation, And Their Disproportionate Effects On Women