History Matangini Hazra And Her Sacrifice For India’s Freedom | #IndianWomenInHistory

Seventy-five years ago, Matangini Hazra, a poor peasant woman, participated in the independence struggle in her own humble way.
By Ruchira Ghosh Nov 23, 2017 4 min read

Not all individuals imbued with patriotic zeal and love for their homeland come to the forefront or grab public attention. On the contrary, many choose to maintain a low profile while giving their best to their beloved country. Seventy-five years ago, Matangini Hazra, a poor peasant woman, participated in the independence struggle in her own humble way. Though she remained out of the limelight, yet her contributions were invaluable. Her name remains etched in the annals of India’s freedom movement.

On 19th October 1870, Matangini Maity was born in penury in Hogla village located under Tamluk police station in Midnapore district, West Bengal. Due to her family’s abject poverty, she could not even get primary education. As a result, she remained unlettered and unschooled all her life. Her dire straits compelled her to become the child bride of an affluent widower Trilochan Hazra, a man in his 60’s with a young son. Her married life was nondescript and uneventful.

By 18, widowed and childless, she returned to her parental village, though she chose to maintain a separate establishment for herself. Over the next few years, she spent the greater part of her time in helping people who lived around her. At that point in time little did she know how her future would take shape. So the years slipped by. In 1905, she became actively interested in the Indian Independence Movement, her source of inspiration being Mahatma Gandhi. A notable feature of the freedom struggle in Midnapore was the participation of women. And Matangini was one among them.

However, the turning point in her life came a few years later. On 26th January 1932 (designated as Independence Day during the freedom movement), menfolk of the area marched in a procession to create awareness about the political scenario prevailing in the country. While it passed by her hut, she came out and joined them. Matangini aged 62, vowed to fight for India’s liberation from the clutches of the British. For her, there was no looking back.

A few months later, she vigorously participated in Mahatma Gandhi’s Civil Disobedience Movement, especially the Salt Satyagraha. She took part in salt manufacturing at Alinan, her late husband’s village. Following which, she was arrested for violating the British salt laws.

The authorities punished the frail woman, by forcing her to walk a long distance. She later participated in the movement for the abolition of the chowkidari tax. During a march towards the court building, to protest against the Governor’s harsh decision to punish all agitators, Matangini was arrested again and made to serve a six-month prison term at Baharampur jail.

After being released, she became an active member of the local unit of Indian National Congress. She resorted to spinning khadi (coarse cotton fabric) on her own charkha – despite her failing eyesight and advancing age. Following the outbreak of a smallpox epidemic, she tirelessly nursed the sick men women and children.

In 1933, she attended the Sub-divisional Congress Conference at Serampore (West Bengal) and sustained injuries when the police unleashed baton charge on the protesters. Later in 1933 when Sir John Anderson, Governor of Bengal visited Tamluk to address a public gathering, Matangini craftily managed to avoid the security and reach the dais where she waved a black flag. She was awarded six months rigorous imprisonment for her bravado. 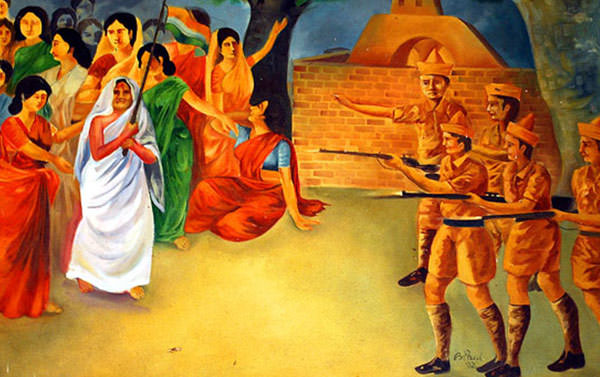 Painting of the incident of 29th September 1942, preserved at Smriti Soudha.

Then came the momentous phase of her life. It was 1942. In August that year, under the banner of the Quit India Movement, local Congress workers planned to besiege various police stations and government offices located in Midnapore district. The 73-year-old Matangini Hazra took the initiative.

On 29th September, she led six thousand supporters, mostly women, to capture the Tamluk police station. When the procession reached the outskirts of the town, the Crown police ordered them to disband, citing Section 144 of the Indian Penal Code. When a defiant Matangini stepped forward, appealing to the police not to shoot at the crowd, she was hit by a bullet.

Unwavering, she moved forward holding the tricolour high, urging her comrades to follow suit. Despite being riddled by bullets she moved on, ceaselessly chanting Vande Mataram. Later they found her limp, lifeless body, lying in a pool of blood. BUt the tricolour was still held high. Even in death, the brave heart had ensured that the flag – symbolizing the spirit of freedom – remained unsullied! A statue of the brave soul stands at the Maidan in the heart of Kolkata. A similar statue marks the spot in her native Tamluk, where she breathed her last. In 2002, as part of the commemoration of sixty years of the Quit India Movement, a series of postage stamps was issued by the postal department. Among them was a five rupee postage stamp with Matangini Hazra’s facsimile. Last but not the least, Hazra Road, a major road in south Kolkata is named in the memory of the valiant freedom fighter.