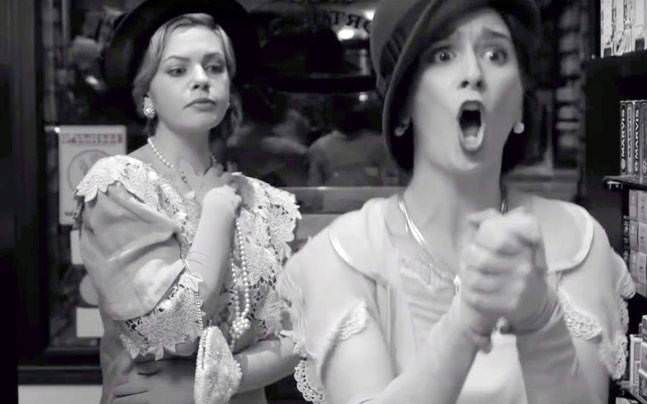 When I came across the web series Period Piece Official on YouTube, I didn’t know its Indian-American creator Liliana Tandon. The ethnic connection was just a coincidence. I was merely researching menstrual products to advise a friend when I stumbled upon the comedic series on the superstitions and stereotypes attached to periods.

As someone who has advocated against menstruation being a taboo, I was hooked. Tandon along with co-creators Amanda Roberge, Rachel Kent and Kate McGarrigle created the series based on the term “period piece” meaning historical drama as a pun.

From their blog, it is abundantly clear that since its inception, the series has received widespread coverage and acclaim. From Roman era to modern day, the series consists of 1-2 minutes long videos that satirize and parody menstrual tropes at various times. The series was so well received that a Kickstarter campaign was started to fund Season 2 in 2016 and successfully raised a substantial amount for production.

Anyone who has followed Sansa’s journey in Game of Thrones or watched Carrie, know that screen representation of periods is not new. Even in India, the late director Rituporno Ghosh depicted the experience in movies such as Chokher Bali and Antarmahal, albeit with much flak.

However, the backgrounds upon which such depictions are made are quite heavy, generally accompanying a form of a distressful event, such as tragedy, horror or loss. This brings more focus to the event’s association with menstruation than menstruation itself, reducing its visibility to the surrounding pessimism. While menstruation has been an important yardstick to measure one’s maturity or health throughout ages, it is a biological process.

This is where Period Piece Official makes its mark. The portrayal of periods in the series is from a light-hearted, humorous standpoint which makes it easy to relate to without conflating it with any additional negativity. Needless to say, it also goes a long way towards breaking the silent barrier of the shame surrounding the subject that leads to harmful, garbled information.

As their website notes, “Liliana hopes to use this short form, comedic web series to de-stigmatize menstruation in the media as well as empower women to embrace their periods. After all, none of us would be here without it. Periods are something every girl should be comfortable talking about, laughing at, and owning.”

What works and does not work for the series?

The series-makers have done a lot of research to dig up interesting facts. Period Piece Official not only turns negative stereotypes of periods on its head, it brings out the positive interconnection of periods to lifestyle practices such as the associating it with magical powers. It also illustrates the history of sanitary napkins in the West.

In a way, it is a stark contrast to advertisements of sanitary products which replace blood or its commercial imitators with a blue fluid thus contributing to the hushed nature of the subject. In respect to free bleeding in 17th century Germany, actors are shown with blood stains on their dresses while Tandon herself sports a sanitary pad held by suspenders in another video.

In her interview, Tandon has stated how as an Indian-American actress she has felt very strongly about inclusiveness in her production. Inclusiveness is casually and subtly introduced to avoid providing ammunition to anti-Social justice warriors.

She acknowledges the various strains of feminism where there can be different opinions on the matter of diversity and how she maintains her position on it. True to that, we see actors from various ethnicities and ages in the series.

In their very second episode based on Colonial America, Tandon made a conscious choice of including actresses of Native American background in order to avoid cultural appropriation. In keeping with intersectionality, despite being a woman of colour herself, Tandon distances from conflating tactics of having one person of colour represent a member of another ethnicity to which they do not belong.

Overlapping representation of ethnicities or genders outside of sensitive backdrops such as colonialism is very much present, however. Tandon herself plays women from various cultures and even men at different points.

Also Read: Why You Should Be Watching #ThatsHarassment – The Video Series On Sexual Harassment

It is necessary to point out though, that in almost all of these cases, the overlap occurs where the actors play characters with more historical privilege than themselves. For example, a black actor portraying a Roman citizen or women portraying cisgender men. But almost never vice versa.

On a very critical note, a possible exception to this would be the portrayal of a menstrual congregation during Biblical times. Fact is that the Roman Empire had conquered and subsequently enabled mass migration through the Middle East to Europe, allowing an influx of various societies around the supposed time. I say “supposed” because it is hard to pinpoint Biblical times upon a single point in history or region.

The very usage of the term Biblical times is problematic. The Bible covers a massive timeline, cultures and geographical span (even when restricted to Mediterranean zones), restricting our assumption to the legend of Jesus Christ. A more appropriate label would have been ‘Hebrew’ or ‘Jewish’ culture.

Now whether Hebrew people were more privileged in their own society than Indians at the time (since Tandon herself is of Indian origin), is hard to say as both societies had very little influential contact with each other then. However, it is certain with the presence of anti-Semitism, that historically they have been less privileged than their European counterparts, which casts some cloud on the matter of white women portraying ancient Hebrew women in the video.

This also denotes the confusing blend of culture and religion as factors in intersectional feminism, which while related, are essentially separate.  The depiction of menstruation in Buddhism may be critiqued on a similar note.

The inclusion of diversity in the series extends to perspectives of men and transgender persons. In the Roman era, the men fall to their knees awestruck having witnessed the miracle of the menstruating women, in modern times the man is shown to avoid sex during menstruation. The latter has laudably been shown without any display of period-shaming on the man’s part.

One may be critical of oversimplifying scientific menstrual facts such as mood swings but this is clearly one of those instances of parodying a negative stereotype that the series does so well. Additionally, throughout the series, there are subtle hints that menstruation is not and should not be a hindrance to desire, desirability and sex.

The cherry on the cake is the caricature of Donald Trump (played brilliantly by Tandon) as a misogynist who indulges in insulting his female host, period shaming and utterly ignoring of queer issues. In having transgender characters in the audience proclaim their experience with menstruation, the creators try to handle trans* sensitivity admirably. However, it is not without its share of criticism where Trump is shown to admit to bleeding himself; a well-intended mockery that borders on sexism and transphobia.

As YouTuber Peter/Ethel Thurston, a transfeminist said, “In the current climate where trans people are being equated with predators, it is problematic to suggest that Trump, a cishet man who’s been accused of sexual assault by countless sources, is related to the trans community in any way. There are various ways this joke of bleeding twice a month could have been kept whilst avoiding this very real issue.”

They go on to explain how toxic masculinity such as Trump’s has affected trans men to act out accordingly and compares the portrayal to Alex Jones attacking Michelle Obama with transphobia. The degradation of women is a part of that. They said that the mockery “could have been achieved here without the need to resort to attacking Trump under the pretence that ‘they’re a trans man’.”

Period Piece Official is an eye opener to many as to how to approach periods in a witty manner. Season 2 is up on YouTube now and one can hope that the award-winning series continues is successful run with more seasons reaching out to an audience beyond YouTube.

Also Read: 4 Progressive Web Series That Are A Must Watch

Surayya Tyabji: The Woman Who Designed Our National Flag | #IndianWomenInHistory

History Suman Saurav - December 10, 2018 3
Despite the design of the national flag being popularly credited to Pingali Venkayyah, Surayya Tyabji was the one who came up the final design.

Eunice De Souza: The Woman Who Dominated The Poetry Skyline |...