FII Inside News #DigitalHifazat V 2.0: Women Speak Out About Their Experience Of The Internet

#DigitalHifazat V 2.0: Women Speak Out About Their Experience Of The Internet

FII launched a series of 4 videos where women spoke out about their experiences of the internet for its campaign on online safety – #DigitalHifazat.
By FII Team Dec 20, 2017 2 min read

The #DigitalHifazat campaign is now on its second year of existence. Last year, we launched this campaign alongside our research report that studied how women are subject to online violence during the 16 Days of Activism. The 16 Days of Activism Against Gender-based Violence is a global campaign that was started in 1991. The campaign hopes to raise awareness about gender-based violence as a human rights issue at the local, national, regional and international level.

Based on the findings of our research report, we advocated for a safe and secure internet for all using articles, videos, posters and infographics to illustrate the rampant nature of online violence against women.

Furthermore, oppression is intersectional, and we hoped to display how different communities of women in India experience the internet – their struggles, their victories, how it empowers them and how they envision #DigitalHifazat – situated within their specific sociopolitical identities and experiences.

With this in mind, we launched a series of four videos that answered the questions we had about how women used the internet. The first video was a crowdsourced video where six young women spoke about their experiences of the internet in response to an open call on our social media platforms. This was followed by women with disabilities, Dalit women and finally, queer women (and queer Dalit women!), talking about their challenges and victories in the online sphere.

Each video brought forth a different experience of the internet as faced by these diverse range of women.

But on the flip side, these women also spoke about how the internet had infinitely expanded their mobility and allowed them to access systems like online banking and online shopping despite having limited physical mobility.

Similarly, the videos featuring Dalit women and queer women discussed the sexist, casteist and queerphobic abuse that Dalit women & queer women were specifically subject to, as well as the mobilisation and community-building potential of social media and platforms like WhatsApp to organise advocacy efforts, and the safe spaces that internet groups provided to network with other women from the same communities.

All the women in our videos spoke about how they envisioned a safe, feminist internet, or #DigitalHifazat. “A feminist internet would arise from a feminist world,” said one, and we couldn’t agree more.

Watch our four videos to learn about how the internet is experienced differently by different communities, and then take a look at our three comics, created by our in-house artist Maitri Dore, all themed around the topic of online violence against women. 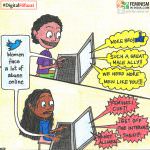 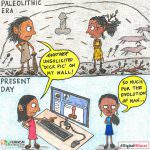 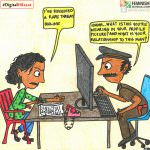 War Widows And The Perception Of Women In The Army