IntersectionalityCaste Dakshayani Velayudhan: The Only Dalit Woman In The Constituent Assembly | #IndianWomenInHistory

Dakshayani Velayudhan: The Only Dalit Woman In The Constituent Assembly | #IndianWomenInHistory

Dakshayani Velayudhan was the only Dalit woman and the youngest member of the Indian Constituent Assembly amongst 299 members and 15 women.
By Somya Jain Mar 1, 2018 5 min read

Dakshayani Velayudhan was the only Dalit woman and the youngest member of the Indian Constituent Assembly amongst 299 members and 15 women. She was born in 1912 in the Mulavukad village of Ernakulam district and belonged to the Pulaya community in Cochin. The Pulayas were mostly agricultural labourers.

Women from the Pulaya community were prohibited by dominant caste persons from covering their torsos (they were only permitted to cover themselves with bead necklaces), having an access to education, cutting their hair or even coming in close proximity to people from dominant castes. Dakshayani Velayudhan defied these norms since she was a little child.

Her name was a marker of subversion in itself, as she was given an unconventional name for a Dalit girl, who were given names such as Kurumba, Poomala, Thara, etc. In contrast, her parents named her Dakshayani, meaning Durga or daughter of Daksha. She recalls in her autobiography how Pulaya women pointed out that she was given an Ezhava girl’s name, a caste although considered backwards, but more privileged than the Pulayas.

She never thought of herself as dispossessed and talked about the love and attention she received from her father amongst her five siblings. She was very inspired by her mother, who defied menstruation-based stigmas and taboos. She says, “When I started my menstruation, I was nine, during holidays, she sketched and explained what was happening to the body and asked my father to get some sanitary pads to take to school”.

She grew up being inspired by the extraordinary forms of protests organised by the Pulaya Mahajan Sabha. The Dalit leaders met and protested on boats – in a lake meeting on Vembanadu lake, as a form of defiance against the king’s rule according to which no Dalit groups could have their meetings on his land.

Foray into subversion: education and employment

She and her family instigated resistance against dominant caste members as she became the first girl to cover her torso and receive an education at a government school. She further proceeded to pursue a Bachelors degree in Chemistry from the Maharaja’s College in Ernakulam, with a scholarship from the Cochin state government.

Dakshayani faced discrimination due to being the only woman in class and for belonging to a non-dominant community. She was prohibited from observing experiments by a dominant caste teacher. That did not deter her and she went on to earn the second position in class and became the first Dalit woman to earn a degree.

Following the completion of her degree, she taught in an Ezhava-dominated high school. The time she spent as a high school teacher was peppered with various instances of discrimination and her refusal to put up with such behaviour.

One such instance occurred sometime after she had started teaching. She encountered a Nair woman who demanded that she get off the road to the paddy fields on the side, to make way for her. However, Dakshayani refused and stated if she wished to walk past her, she should get down the path and walk. The dominant caste woman conceded to her demands and walked through the paddy fields.

In 1940, she married Dalit leader Raman Kelan Velayudhan at Sevagram in Wardha, in M K Gandhi and Kasturba Gandhi’s presence while a leper priest conducted the ceremony. She did not convert to Christianity as many of her family members had done.

Activism and her role in the making of the constitution

The disillusionment with the institutional ability to counter systematic discrimination made her approach politics as a practical means to challenge and eradicate discrimination. She contested elections from a scheduled caste seat in the Cochin legislative council, in the footsteps of her brother KP Vallon.

She was proactive when it came to the welfare of non-dominant caste persons in the parliament. There are a few instances when she had to face sexist remarks for having talked about wellbeing and due rights more than her time limit. The chairperson, in response to her exceeding her time limit, stated that “You have exceeded your time limit, I’m only allowing you to speak because you’re a woman”.

She was a staunch supporter of both Gandhi and Ambedkar, with the objective of ending caste discrimination and making it illegal. She staunchly supported the idea of a socialist republic with a strong centre. She was very vocal in her support for Article 17 of the Indian Constitution.

After her time as a member of the Constituent Assembly and the provisional parliament, Dakshayani Velayudhan retired from active politics and worked for underprivileged groups. Later in life, she went on to organise a forum for Ambedkarite women titled Mahila Jagriti Parishad in Delhi to work among slum dwellers.

The political understanding of oppression and inequality and how it manifests itself in one’s personal life led her to consciously question archaic beliefs and habits, even in the most ordinary of instances. Her daughter Meera recalled how once when she was preparing for exams with a slouched back, her mother corrected her and reminded her to sit straight, reminding her of the years of oppression that enforced the slouching of one’s back in the presence of dominant castes.

It is from these anecdotes that one can trace her personal and political evolution and get an idea of the courage she carried with her uncompromising ideas. Her legacy still lives with the constitution which promoted her ideas of equality. 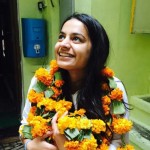 ‘Dalit’ As A Visual Identity: Critiquing Savarna Hypocrisy Through Film And Literature

Living With Fibromyalgia: An Invisible And Chronic Illness