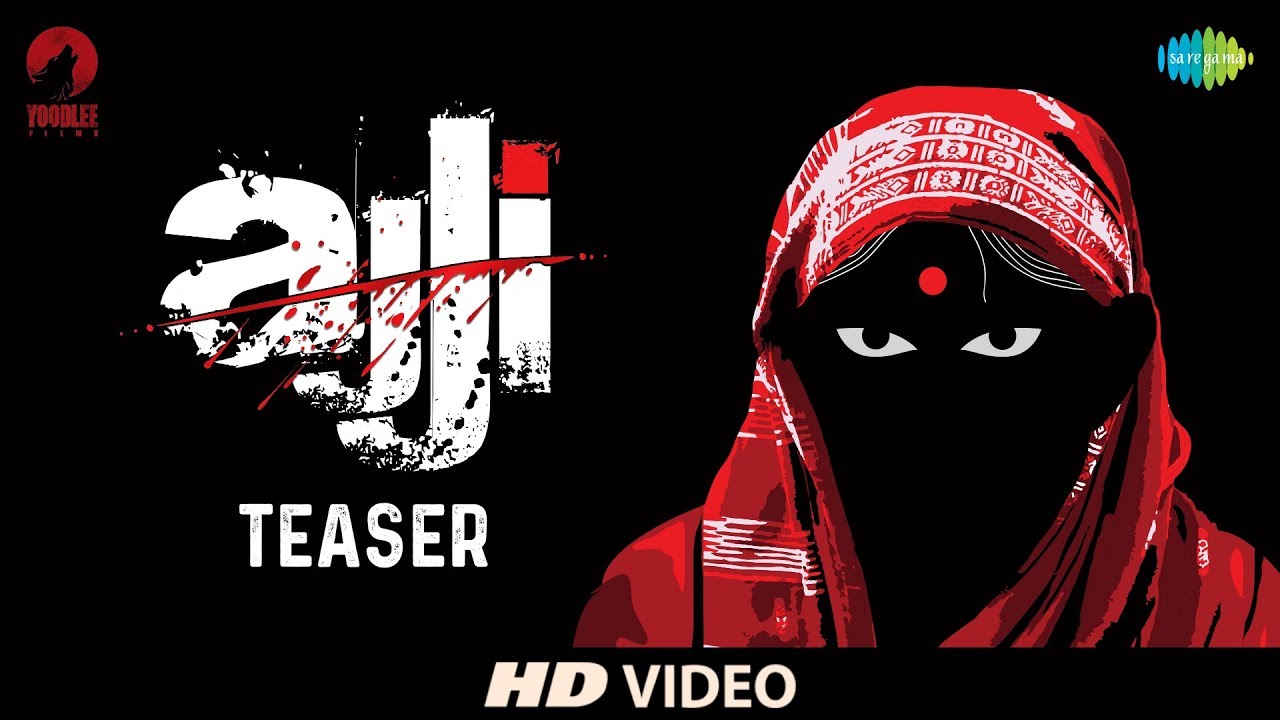 Devashish Makhija’s feature film directorial debut Ajji follows several others in the theme of rape/assault revenge drama in Hindi cinema in recent years—Drishyam, Angry Indian Goddesses, Mom, Maatr—to name a few. Uncomfortable with the glorification of vigilante justice (which informs a whole genre of films like A Wednesday, Madaari, Gabbar is Back, etc), I have given most of these films a wide berth.

But I was intrigued by the trailer of this film, its striking vagina-themed poster (below) and the fact that it was directed by Makhija, whose short films Taandav and Agli Baar I had enjoyed watching earlier. But what else makes this film stand out at a cursory glance? The rape survivor is a child from a slum and the avenger her arthritic, elderly grandmother. It is, as its promotion claimed, “a dark take on Red Riding Hood“.

The film begins with Ajji scouring the neighbourhood for her missing granddaughter Manda, with the help of Leela, and coming upon her battered and limp body on the garbage heap. The scene, like other significant ones in the film, is a prolonged one and manages to maintain our anticipation, as we follow the hobbling figure of Ajji calling out for Manda repeatedly.

There are no theatrics at the discovery, but a blanket of despair that descends on Manda’s family, when the rape of their daughter is followed by their humiliation at the hands of the compromised police officer who arrives to (not) file Manda’s FIR. Their habitual bypassing of insignificant laws in the pursuit of lives of dignity is held against them.

Legal recourse and due process of law are inaccessible to them in a social structure where violence is so systemic that one’s agency is limited to choosing one victimhood over another. Ajji quietly observes while Manda’s parents resign themselves to their fate and begins plotting after Leela helps her identify the attacker – the influential and apparently invulnerable Dhawle.

Lest the film transpires into a story of avenging honour, or similarly shift focus away from the visibly traumatised ten-year-old Manda (sensitively played by Sharvani Suryavanshi), it keeps bringing us back to the gruesomeness of Manda’s condition. In a brief flashback scene and during Dhawle’s own ‘confession’, we trace the transformation of a fearless, unfettered young girl and the attempt to discipline and teach her a lesson.

Legal recourse and due process of law are inaccessible to them in a social structure where violence is so systemic.

Whether it is the police inspector’s voyeuristic glance at her body, or Manda’s incessant bleeding that Ajji tries her best daily to staunch, or her lack of bladder control when she recognises Dhawle from a poster cutout, the camerawork guides the viewer’s eye to the material actuality of the aftermath of rape. Though these scenes can be very triggering and the responsibility of portraying such scenes needs more dialogue.

In arguably one of the most disturbing scenes in the film, Dhawle (Abhishek Banerjee) dismembers and humps a mannequin, while his aide records it and Ajji watches stealthily, at a distance. This extended sequence takes us into the depraved interiors of Dhawle’s mind, building upon his monstrosity and again putting Manda centre stage through association, thereby strengthening Ajji’s resolve to carry out her revenge.

Undoubtedly, the most fascinating portrayal is that of Ajji, played by the awe-inspiring Sushama Deshpande. One follows the quiet, stiff-jointed figure of Ajji as she endures her body’s inconveniences, tenderly ministers to her granddaughter’s wounds and then as she takes to the streets at night, stalking her prey, switching seamlessly between gentle-nurturing and watchful-predatory.

Interspersed in these scenes, is also her chilling training at the hands of her friend/admirer, the butcher (the woodcutter from the fairy tale). Her dogged pursuit of him makes him relent and teach her how to tear apart a carcass with his knife, which she readily learns. When it comes to the actual act, it is a humbler, more familiar weapon that rises to the occasion.

The most haunting scene for me shall remain Ajji’s seduction of Dhawle, leading up to a gory climax where she ‘alters’ him. Her heavily painted face, with its thin Chachi 420-like voice, is necessary for her subversive realisation of the wolf-disguised-as-grandmother trope, as she lures him with a striptease and enacts his devouring.

The dark forest of Red Riding Hood and her passage into womanhood is transformed into the urban dystopic jungle, where little Manda poignantly interprets her trauma as a ritual of female maturity that violently hurtles her into sexual awareness. She is not the only survivor/victim. Dhawle’s record as a repeated sexual offender and the varied profiles of the women and girls he attacks shows the interchangeability and universal vulnerability of all women, and the impunity with which men function.

His own daughter is vulnerable, as he uses her as a prop to demonstrate his assault upon Manda to the police officer, while his wife watches passively in the background. But it is also the accompanying sexual insecurity and overconfidence that are his undoing, at the hands of a wise elderly woman (aware of her sexual power), aided by her sex-worker friend—the larger argument being that male sexual predation can be countered by female solidarities and not by a retreat into invisible and desexualised spaces into which women are being constantly thrust.

The ointments prepared by the hack doctor are not effective on Manda, rather it is when Ajji closes in on her victim, that Manda’s psyche heals slowly. She reaches out to be physically comforted by her father and later lies snugly in between her parents, after Ajji returns from her mission, successful. Hers was not simply the mission of the self-righteous, but that of one who simply sees no other way of survival except entering the violent recesses of her antagonist’s twisted mind.

The dark forest of Red Riding Hood and her passage into womanhood is transformed into the urban dystopic jungle.

It is only when the film is viewed thus in the genre of a fairy tale adaptation, that its superbly atmospheric, heavily stylised and pared down setting does not obstruct one’s viewing experience. Otherwise, the grimy interiors of Ajji’s slum dwelling, captured in claustrophobic detail, can clash with the curiously depopulated (but for dogs), apocalyptic-like neighbourhood.

The film can be easily dismissed, especially in its demonisation of the villain or the mode of revenge opted by Ajji, both of which are obvious for most of the film. In India’s current political climate, when public outrage at increasing instances of child sexual abuse has recently culminated in an ordinance ruling the death sentence for child rapists, (amidst a polarised debate), this film’s politics could perhaps be called populist.

However, if it seems unnecessarily bleak and unflinching, it may be because we are far too sanitised within our middle-class bubbles to imagine such horrible realities. The particulars of the situation and characters do not matter and are deliberately withheld from the viewer, for this could well be the story anywhere in contemporary dystopic India.

Stories like this do not offer the viewer catharsis but jolt us out of our complacency and our blissful (intermittently interrupted) ignorance of violence. The latter is generally encountered as statistics in the newspaper and in sensationalising prime-time television entertainment, training us to become inured to routine, endemic violence.

Ajji, though not a wholly mainstream Hindi film but closer to arthouse noir, does a provocative job of capturing the psychic reality that informs the fears and desires of far too many girls and women in contemporary Indian society. The unsettled feeling one is left with at the end of the film is the dilemma of situating a fairy tale in its historical context; versus analysing it purely in the light of its psychological depth.

Rituparna Sengupta is a PhD scholar in Literature at IIT Delhi. She is working on her doctoral thesis on contemporary popular English adaptations of the Ramayana and the Mahabharata. She can be followed on Facebook and her film reviews can be followed here.

Zero Fails To Zero In On Any Real Issue Related To...