Kadambini Ganguly (18 July, 1861-3 October, 1923), born as Kadambini Basu, was one of the first two female graduates (along with Chandramukhi Basu) from India. She also went on to become one of the first female doctors of the country who were certified to practise western medicine.
By Ekata Lahiri Jan 29, 2019 3 min read

Kadambini Ganguly (18 July, 1861- 3 October, 1923), born as Kadambini Basu, was one of the first two female graduates (along with Chandramukhi Basu) from India. She also went on to become one of the first female doctors of the country who were certified to practise western medicine. Besides Kadambini’s professional prowess, her contribution to the Indian freedom struggle is also noteworthy.

Kadambini was born in Bhagalpur, Bihar, in 1861 in a Brahmo family which originally hailed from Barisal (in present Bangladesh). Her father, Braja Kishore Basu, was a headmaster by profession, and was also involved with several social movements surrounding women empowerment, which was not a topic that was very widely touched upon during the late nineteenth century. Along with Abhay Charan Mallick, he established the Bhagalpur Mahila Samiti in 1863, which was the first of its kind in contemporary India. Therefore, it would be inaccurate to say that Kadambini hailed from a family which was comparatively more progressive with regards to social issues than the prevailing conditions during the period. Her family’s allegiance to the Brahmo doctrine is another signifier of the same.

Besides Kadambini’s professional prowess, her contribution to the Indian freedom struggle is also noteworthy.

Alongside clearing her own entrance, Kadambini also continuously strived to make education more accessible to women, and her efforts culminated in the Bethune College introducing graduation courses and the subject Fine Arts for the first time in the year 1883. The college continues to provide affordable and quality education to a large section of women till date.

Also read: Sulagitti Narasamma: The Radical Mother Of All | #IndianWomeninHistory

She graduated in 1882 with an arts degree and decided to study western medicine. She successfully graduated in 1886 from the Calcutta Medical College after considerable obstacles from the college as they were not very open to the admission of women candidates, and was one of the first two female candidates to achieve the same. In a society ridden with misogynistic practices such as the Sati, child marriage, and many more, she was truly a pathbreaker in terms of providing women access to educational spaces and inspiring plenty of women to fight for their right to formal education.

Kadambini was awarded a scholarship of Rs. 20 per month for studying medicine. However, after her graduation, she worked for only a very short period at the Lady Dufferin Women’s Hospital (where her salary was Rs. 200 per month) before deciding to travel to London in 1892 for further education. The probable reason behind this is reckoned to be a strong opposition from her colleagues and administrative staff, for whom a woman entering the conventionally ‘male’ domains of mainstream economic activities indeed came as a deviance which many could not accept very easily.

Kadambini also worked extensively for the rights of female coal miners in the Eastern parts of India, and served as the President of Transvaal Indian Association as well.

Kadambini returned from London with the prestigious qualifications of LRCP (Edinburgh), GFPC (Dublin), and LRCS (Glasgow), and chose to concentrate more on her private practice, as it most likely was less affected by judgemental external interferences. She is often recognised as the first woman in the entire South Asia to become a practitioner of western medicine with foreign qualifications. However, one also has to keep in mind that this fact was possible also owing to the socio-economic privilege Kadambini was born with, and which perhaps was only a dream to many similar aspirants who could not continue their education due to financial strains and regressive societal norms.

Role in Social Reform and Movements

Kadambini married Dwarakanath Ganguly, another prominent Brahmo reformer, and had eight children in total. Dwarakanath supported Kadambini’s educational and professional aspirations despite both of them receiving considerable backlash from both the Brahmo Samaj and the upper caste Bhadralok community. Kadambini was even referred to as a ‘courtesan’ by Maheshchandra Pal, the editor of a renowned Bengali periodical (who was later imprisoned for six months for the same).

Kadambini was also involved in several movements which greatly contributed to India’s freedom struggle. She became the first woman to be on the dais at a session of the Indian National Congress. She spearheaded many movements during the partition of Bengal and organised the Women’s Conference in Calcutta (1908). Kadambini also worked extensively for the rights of female coal miners in the eastern parts of India, and served as the President of Transvaal Indian Association. She continued to practiced medicine until her death in 1923.

Women like her have created a space for women in fields which remain traditionally a man’s sphere even in the present day. Kadambini, achieved remarkable feats at a time where women were not even considered citizens. Till date, she remains an inspiration in the field of STEM. 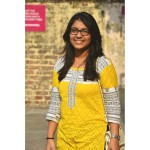