There is a Facebook page (and Twitter account) entitled Man Who Has It All and it offers an interesting perspective on feminism by venturing into an alternate reality. In its world, women are the dominant sex, and gender roles are reversed. Here, history is filled with female scientists and artists and precedents, and men run the risk of rape if they go outside un-chaperoned at night. Men are reduced to handsome accessories and matriarchy rules.

Questions are thrown open to the public like “Do you think fathers should work part-time once their children are at school?” and followers, mostly female, answer with mock-sexist replies, with things like “Men should be confined to the domestic sphere, it is no world for them outside.” Along with the parallel world, another unusual thing about the page is that the replies are very mockingly politically incorrect and ‘aggressive’, unlike the politically correct discourse occupying mainstream media today.

Women reply without qualms that men are not suited for holding public office or much apart from beauty treatments. The small number of women and a few men advocating men’s rights are torn down with ferocity. The page mirrors the real patriarchy’s response to women and men who campaign for the rights of the women, or in some cases, to the few women daring to appear in traditionally male-dominated fields like politics.

I would find myself returning to the Facebook page every time I needed a mental break – and that led me to think about what this page was truly doing to help feminism.

When I first went through the page, I felt a sudden, powerful surge of relief. The world created was convincing enough to strip me of the fear of harassment every time I stepped out, to make me feel that my beauty wasn’t the only thing the world cared about, to make me feel the way the dominant sex can currently afford to, for a half hour. I would find myself returning to it every time I needed a mental break – and that led me to think about what this page was truly doing to help feminism.

If I was no longer using my time and energy, thinking of ways to escape sexual harassment, that would free up a lot of my physical and mental space. I understood what it truly was to not feel that threat anymore, and understood what privilege the dominant sex still has. It was also enough to justify the small concessions on life women get daily. Women are today allowed small reservations in spaces like public transportation to a lot of popular outrage, especially male outrage.

But for every time someone says women don’t need extra seats, there will be travelling women saying they need space to get away from groping co-passengers. For every time people say women don’t need ‘excess, tailored forces’ like a police unit to only look into crimes against women, there will be women who work late who say they do. For every time an educational quota for women provokes anger and hate, there will be several women saying that they needed the extra privilege as they come from backgrounds where women are best relegated to being ‘‘ instead of academicians. And that is just one ground of justifying academic quotas, in a country still dominated by female feticide.

This page opens up a big opinion to the public forum – that in a world marked by big injustice, small concessions are not only but absolutely if only to win for minorities what the dominant class considers ‘normal’. This page opens one’s eyes to how large the gap still is between the sexually privileged and the unprivileged, now in 2019, and goes on to show how wrong men judging women’s works in art and lifestyle choices in the past was – there was no merging of their realities, no understanding, and thus no objective evaluation possible between the sexes.

The discourse you find on this page directed against men is identical with misogynistic discourse in several parts of the world today.

The second thing this page forces one to consider is the validity of lived experiences. I understood, shedding my gender role for a few minutes, the large mental gap between the privileged and the oppressed that is shaped by lived experience. I understood how different the reality of a man my age is from mine, but could not begin to comprehend how different even mine was from a rape survivor’s. Thus, it is nearly impossible for a comprehend what thinking about sexual assault 24*7, 365 days a year feels like. Hence, when the same men opine on, and block, certain privileges granted to women, it is blatant privilege combined with the abuse of power. They were not raped, they do not know what a victim is going through at all. Still, they opine she should have testified in a certain way if she had to have her “claim” believed.

This page shows us the brazen fallacies associated with having the same social standards of behaviour for men and women in certain cases – say, in a courtroom – where clearly, the majority of other social institutions favour one sex over the other (workplaces, video game websites, bars). As our society inherently disfavors women, as a man, if you are on a rape victim’s behaviour, you are venturing into a field you have no understanding and are devaluing her lived-experience trauma you are saying she can’t have certain ‘privileges’, like cheap medical care post-rape, you are tilting the bar again in favour of patriarchy – because cheap aid is really poor consolation for being raped, and you aren’t prepared to allow her even that.

The third lesson to be derived from this page is intertwined with its use of mock-aggression and lack of political correctness. The discourse you find on this page directed against men is identical with misogynistic discourse in several parts of the world today. There are stern, vociferous proclamations that women belong in the house as baby-producing objects in the real world. Aggression is a prevalent and useful tactic in social domination. And what is very damaging and hypocritical is that the movements against privilege nowadays are being accused of ‘unfair use of aggression’.

Feminists are termed feminazis when they campaign for the rights of rural girls to study or vote. In most cases, such comments come from men who have not bothered to go through the social and gender theories the campaigning women have been quoting – what is foreign is dangerous to them, and that includes educated women. Rarely is a feminist pitch or campaign started as an all-out shouting match – as every person doing the basics of PR knows, more bees are attracted by honey than vinegar.

In a world where aggressive crimes are perpetrated by men against women (rape, domestic violence), where men have historically gone to war, where men have greater physical strength than women, where the biggest weapons of aggression lie with powerful countries who use it to destroy smaller ones (the US ravaging Vietnam during the Vietnam War) – equating a rights struggle with the biggest Holocaust in history exposes everything hypocritical and wrong with existing power structures in society, be it sexual, economic, military, racial, or such. Privileged people refuse to give away their privilege, and wrongfully accuse others of abusing the aggression they have abused and continue to abuse.

Also read: ‘Bitches Near Me’ And The Sexist AI: A Mirror To Our Misogynist Society

In a world that is perennially trying to load those privileged with more privilege, Man Who Has It All stands out as a truly remarkable media phenomenon that switches roles. By doing that, it helps people on one side of the fence to understand those on the other, and as is common knowledge, communication is the key to problem-solving. With this article, I hope to engage a wider audience in the study of what I believe is a truly thought-provoking work of entertainment. I hope to hold out more hope towards the intersectional struggle that is today doing slowly but surely to the patriarchy what Vietnam did to the USA – putting up a valiant fight.

Delhi: Not For A Free Bus Ride, But For The Freedom To Travel Safely 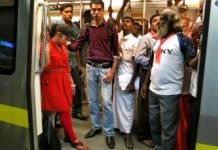 150 Men Perform The Last Rites Of Their Marriages: A Bizarre...