IntersectionalityGender Do Gender Non-Conforming People Have A Place In Dating Apps?

Do Gender Non-Conforming People Have A Place In Dating Apps?

This feeling to find someone who would love my body the way I have want it to be loved got me into dating apps. But the whole experience of it turned out to be quite different.
By Riju Banerjee Sep 14, 2020 5 min read

It has been a couple of years since I have been using dating apps and it has been an year that I have stopped using them. But staying away has suddenly gotten tough this lock-down. Stuck with me, my thoughts and my partially liberal parents, I once again felt the need to connect. But doing so, it all started coming back to me.

But, is it really worth it?

Before I go into all of that, a little about me. I am a twenty-six year old, male-bodied, non-binary trans woman. By that I mean that I identify as a woman, but I do not want to stick to binary gender norms.

Right! Now back to my dating app experiences. So, initially when I started exploring the whole finding-a-date thing using apps, I inevitably started with the ones meant for gay men. As a teenager, I was not even aware or rather believed that I could take my chances with apps predominately meant for heterosexual men and woman. In fact, I was not even aware that my sexuality can manifest separately from my gender identity, and I am liable to claim space in a heterosexual setting, and that my gender as a woman is valid and deserves to be respected. I would get to that in a while.

But before that, as an eighteen-year-old, I thought I am no different from an effeminate gay man; I could not figure out that my gender is my own experience and not what everybody else perceives. Growing up as queer, my identity and sexuality has rarely been affirmed by the society, but when I started knowing queer people, I tried to be whatever they thought I was for I wanted to be affirmed, I wanted to be finally accepted, I wanted to be loved. This feeling to find someone who would love my body the way I want it to be loved, got me into dating apps. But the whole experience of it turned out to be quite different.

The yellow and the black screen of my phone took me to a different world with so many men, shirtless, loud and out. I felt, this is the place. I was thrilled to see the celebration of sexuality in all its colours. But suddenly my world started shaking as my bubble of happiness was burst with all the incoming messages I received. “You fucking tranny…” They made sure that I realise that this was not my place. That, it is only and only for men, and I am not one.

I stayed on; I did not know where else to go.

Everybody I knew, said that’s how it is. All I have to do is pose as a man, once they meet you, they wouldn’t care. All they want is your hole. It wouldn’t matter if you are a man or not. This went on for years; I had always imagined my first date to be subtle, to be cute. I have always pictured myself happy. One evening, I did go on a date. The man said something on call that I had to remember, something I had to do for him: “Dress like a man, act like a man, they must not know…”

I agreed. I had to, I had to be happy, since for once, a handsome man had noticed me. This does not often happen for girls like us. There were no holding hands, there were no butterflies in my belly. All there was, was a dark alley, whispers, a room dimly lit. He did want me to be a woman when he was on top of me, he wanted me to scream, moan and resist like a woman. He said here, and here only, I could be myself. So, there I was, in fear, away from all, in a dark, dingy room in Kolkata; I was a woman.

Few years from then, the cis gender heterosexual dating apps started claiming that they have become inclusive. They now welcome all genders. Finally, I felt a relief. I could now leave the place that was never mine for a place I would belong. By then I had almost accepted, that I would never be accepted the way I want to. But yet, there was hope.

I was intrigued by the whole swiping right feature, if I approve and left, if I reject approach. I finally felt that I was in power. Initially, it all went quite well. Men were polite, they wanted to go out for coffee or dinner. I was elated. This was something so new for me. I felt respected, I thought finally I am getting what I deserve. “Dress like a woman,” most of them said when they wanted to meet. I felt validated, I thought that they are accepting me for who I am.

But soon compliments changed into enforcement, freedom to express became governed. And when I refused to follow, I suddenly became, “You fucking tranny…” They said I am not a ‘real’ woman; I never will be. But I had to fit, I couldn’t lose, not here too… I succumbed. I had to have less body hair than them, I had to look pretty, I had to be thin, I had to be ‘feminine’, until I could not do it anymore.

Today I live with deep rooted self-loathing for being hairy, for being taller than most men, for being comfortable with my genitals, for not wanting to go through a sex-change. They made me realise that I cannot be stuck in between. Nobody wants something that neither looks like a man, nor a woman.

I would not lie, I did find friends in these apps—friends who were curious about me, about what I am, do I even exist! They were intrigued, fascinated. My gender was exotic for them. They urged, pleaded and demanded that I tell them my story, tell them all that I am, stand naked in front of them to see what lies underneath. I did, I thought it’s good if people want to be aware, until I realised, it is till then, that I match their expectations.

Today at twenty-six, soon to be twenty-seven, I stand tall, with all my insecurities, away from all the prying eyes in those thousands of so-called inclusive dating platforms. People say I have to love myself.

Is it only my responsibility and mine alone so do so?

Is it not the systems, the society’s too, to give me a chance?

Also read: How Grindr, The Dating App Is Destroying My Mental Health 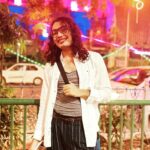