Media, the 4th pillar of democracy, is popularly credited with providing political participation to citizens, bridging the gap between the state, its political elites, and society. News creates political discourses. These discourses shape public opinion. And public opinions in turn influence law and policy. But this linear relationship is often an oversimplification rooted in ignoring myriads of factors that compels the press into making sensational news out of an issue in the first place. These factors revolve around ensuring ad revenues, interests of private stakeholders, government influence, and corporate benefits that come from maintenance of status quo. The relationship between government and the media is thus a sensitive one that requires frequent regulation from both ends.

The Nirbhaya Rape case of 2012 is an interesting study to understand this symbiotic relationship. In December of 2012, a woman was beaten, gang-raped, and tortured in a private bus in Delhi. The violent nature of the crime aided in its sensationalization which in turn resulted in widespread protests. This led to the creation of several sexual assault laws, and fast track courts including the infamous Criminal Law (Amendment) Act 2013. The Act expanded the definition of rape and consent, and inserted new sections in the Indian Penal Code to include voyeurism, stalking, and acid attack as sexual offences.

The type of journalism employed during this case was more investigative and active in nature than a mere passive recording of events. It equipped the public with means to influence the center’s policies around women’s safety. Since media exposure affects the scope of policy, the government couldn’t form policy without ensuring media reaction. But departing from the altruistic notions usually associated with investigative reporting, high ratings, high ad revenue and high circulation undoubtedly contributed to the extensive coverage of this case. 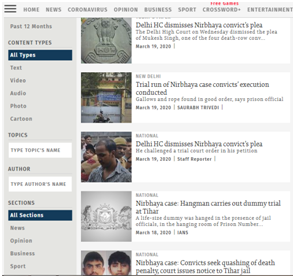 G Gopal Reddy in his article Media and Public Policy mentions how the impact of media on policy depends on two factors- the nature of media’s portrayal and the frequency of attention by the media to the issue in the past. Both these factors are also related to the nature of the issue itself.

Close links to corporate economy often limit media’s ability to investigate the government. In his book Manufacturing Consent, Noam Chomsky mentions a propaganda model at work that defines the relationship between the state, mass media and the general public. According to Chomsky, market forces, self censorship, and ideological alignments can subtly manipulate public opinion. Many political scientists believe that the linear ‘Popular Mobilization Method’ (as mentioned in the Nirbhaya case) underestimates special interest groups and political elites that ultimately dominate the policymaking process, maintaining an illusion of democratic consent of the ruled.

Media as a Legitimising Force of Domestic Policies

Other times, the media itself acts as a political agent. Recent news coverage of the Citizenship Amendment Act (CAA), Farmers Acts, as well as the India-China escalation serves as an example of the same. During the CAA protests that gripped the nation last December, and the Farmer’s Acts protests that erupted in late September, polarizing opinions by mass media rapidly entered public discourse. Privately owned media houses that have close associations with the current administration ensured that maintenance of status quo be observed.

Policies obviously serve as critical election issues, and a larger scale public outrage can potentially lead to collapse of a government. This is why the government is extremely calculative of the media’s response to its policies. While some news outlets indulged in a passive reporting of the events of the CAA and Farmer’s Act protests, others were involved in an investigative dispelling of “misunderstanding” surrounding these Acts.

In both cases, anti-government protesters were demonized and the Acts were given a platform to be presented as legitimate. This response can be better understood in context of Stanley Cohen’s ‘Moral Panic’ phenomena wherein the media uses fear as a medium to maintain social order and police ideological boundaries. A moral panic is spread in society when a person or a group of people, events, or conditions are defined as a threat to societal values and interests.

Also read: Zomato’s Period Leave Policy And The Feminist Dilemma Around It

Historically, the media has participated extensively in the realm of international relations, the most prominent example of which is the Red Scare during the Cold War. India has a strained relationship with two of its immediate neighbours- Pakistan and China. Recently, the escalation between Indian and Chinese soldiers at the Line of Actual Control led to widespread anti-China sentiments. Every development of the escalation occupied prime time slots and an angry Indian public boycotted Chinese products. While access to information related to foreign policy is crucial, it is also important to understand the role of the media during a crisis and the degree of influence it asserts on government response and potential deterrence or promotion of war.

Neyog also mentions the role of the media in communicating crisis narrative and amplifying the consequences of crisis for democratic politics and society. Government response to the Pakistan and China conflict also serves as important election issues and media helps promote the idea of foreign threat to Indian nation, which gives a nationalist ruling party its legitimacy.Thus, while mass media certainly has the capacity to prompt widespread changes in public opinion, corporate or government interests may or may not precede public interests. Critically analysing the relationship between media and the state brings to forefront several issues which a linear explanation overlooks. Deregulation of the press can lead to an institutionalization of the media, wherein it acts as an extension of the government, giving new meaning to the phrase ‘4th Pillar of Democracy’.

Halima is a History graduate from Lady Shri Ram College for Women. She has worked with grassroots political parties as well as international organisations. Her research interests are feminist theory, foreign policy, and area studies. She is currently doing a Master’s in International Relations. In her free time, she passionately advocates for Phineas and Ferb songs for Grammy’s.

Touch & The Spectrum Of Emotions Around It: Mental Health During Lockdown

Why Should Marriage For Women With Disabilities Be Such A Burden?