IntersectionalityGender India And Gender Games: Does One Gender Win When Another Loses?

Gender equality is often seen as a binary, two-person zero sum game. Women's win is considered men's loss and vice-versa. How much of this is true?
By Taniya Roy Jul 20, 2021 6 min read

A game where an advantage won by one side is a point lost by the other. Total gains summed up and total losses subtracted, the result of this game stands to be zero. So given this context and a country like India, where do you think gender equality fits in? Or does it fit, at all?

Recently, I was quite taken aback by a ted talk by sociologist Michael Kimmel. In the talk, he draws a parallel between gender politics and a two-person zero sum game. Of course, his argument is in the context of the western civilised world.

However, irrespective of the level of socio-economic development, the men-vs-women’s rights battle is the reality of most nation states today. So, Kimmel’s westernised theory easily applies to India in its practicality. Our country too is riddled with examples where a win by the menfolk is considered as a loss for the womenfolk and vice-versa.

Women in combat and command forces

Women have been a part of the Indian Army since 1976, however, only in non-command/combat roles. Women have had the opportunity of sufficing military nursing services, being paratroopers or even receiving a Sena Medal for exemplary courage. Despite, they were never allowed to serve in the infantry or the armoured corps.

The governmental stand has always been that male troops, who are predominantly drawn from rural backgrounds, may be unwilling to accept a woman commander. Moreover, because male officers spend most of their time in frontline positions, away from their families, they look forward to coming back to peace stations after manning challenging roles. But if these stations are already given to women officers, where will the male officers go?

Further to this in 2018, former army chief and the current Chief of Defence Staff, General Bipin Rawat mentioned to a news network that the dearth of women soldiers serving in combat positions can be attributed to a woman feeling uncomfortable at the front line due to the general lack of privacy and protection both from the enemy and her subordinates.

What the said government or Mr. Rawat fail to realise is that by thinking out loud, they have narrowed the collective position of both men and women in the society.

The right to serve in the armed forces should be as much as a woman’s choice as much as it is a man’s, as long as physical and qualitative standards are not compromised. History is replete with examples where men and women have teamed up to provide the best defense to our nation. From Lietuenant Colonel Mitali Madhumati, Captain Swati Singh, Lietuenant General (Dr) Madhuri Kanitkar, to Lieutenant Ganever Lalji, examples are plenty.

In one of her opinion pieces, ex-SSC logistics officer of the Indian Navy Shatarupa Dasgupta writes, “modern day warfare relies a lot on technology-based weaponry vis-à-vis hand-to-hand combat.” Incidentally, units containing many women are often the choice targets for enemy attacks in any major war, as are the military hospitals with women nurses and doctors. And this, is where the argument comes full circle.

Also read: Women In Leadership: How Close Are We To Closing The Gender Gap?

Hence, as the Supreme Court Justice D.Y. Chandrachud said – primarily, two things are required to get equal footing for men and women in the army — administrative will, and change in mindset.

In 2019, sociologist Dr. Namrata Gupta wrote a book titled Women in Science and Technology: Confronting Inequalities (SAGE Publications India, 2019). Among its other learned findings, one thought-provoking piece of data that the book puts forward is – women form only 10-15% of Science Technology Engineering Mathematics (STEM) researchers and faculty members in the IITs, CSIR, AIIMS and PGIs. In private research and development labs as well, there are very few women scientists.

The counter-argument that is often cited to this, is a certain 2018 research paper published in Psychological Science. This paper states that given the choice, women deter from choosing STEM professions, and that too in gender-equal countries.

However, one factor that the counter-debaters often forget is that the said gender-equal countries are also welfare states with high levels of social security. These nations provide equitable financial freedom and life satisfaction to all job holders irrespective of the level of technicality the job involves. So, one can actually choose to do what s/he is particularly passionate about. Sadly, these facts do not apply to a country like India.

What the said counter-argument also ignores is that the study even surveyed the percentage of girls who excelled in science or math in the gender-equal countries. Interestingly, the figure was larger than the number of women who graduate with STEM degrees, meaning, women can be good in science and still choose to pursue, say, weaving as a career.

For what happens in India, a detailed set of studies by Dr. Sapna Cheryan and colleagues of the University of Washington, Seattle can be referred. Their paper: Why are some STEM fields more gender balanced than others? (Psychological Bulletin 2017;143:1-35, open access) suggests that the lack of sufficient women role models is one of the driving factors behind the low presence of women in pure scientific research in India.

A general lack of exposure to certain fields and psychological conditioning to the fact that women are more fitted for ‘delicate’ jobs vis-à-vis ‘hard’ or ‘technical’ jobs are other contributing factors. Few role models mean few professional uptakes which in turn again mean, few role models.

As a result, inequality of opportunity artificially reduces the pool of talent which our society can draw from.

Progress made by women at work is not loss for men

In the wake of the Coronavirus pandemic, LinkedIn Opportunity Index 2021 found out that 9 in 10 working women in India were negatively impacted. Nearly 85% of women have missed out on a raise, promotion or other work offers owing to gender-related biases. This is significantly higher than the Asia Pacific regional average of 60%.

There are stellar leaders like Indra K. Nooyi, Kiran Mazumdar-Shaw and Arundhati Bhattacharya among others who have climbed the corporate ladder and gone on to rule the business game. Does that make their male employees ‘losers’ because women are leading them?

Similarly, men like Narayan Murthy, Azim Premji and Shiv Nadar are the founding fathers of their respective business empires. Does that make their women employees ‘losers’?

What society today needs to realise at large is that pro-woman policies are not anti-men policies, and that gender equality is not a gendered term. The more a man-woman unit (can be family/company/country) practices gender equity, the happier it will be in the long run.

For instance, when parents work equally both inside and outside the household, they are able to invest more in the health and education of their children, thereby, planting the seeds for the accumulation of human capital in the next generation.

The good news is that an increasing number of men and women are realising this today. Outcome is increasingly becoming a function of choice. However, as our collective history is punctured with a long back story of inequality, and even today, the balance is not exactly at level, both genders should come forward to contribute their bits in making the society an equitable one.

Much in line what a famous leader once said, “One cannot shake hands with a clenched fist.” 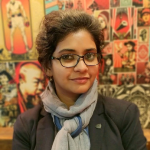 Taniya Roy hails from Kolkata, the city of sepia dreams. A paw-rent, semi-colon enthusiast and wordsmith, she writes for a living and lives for writing her thoughts out. She has done her Masters in Economics from the University of Calcutta.

Why Are So Many Working Women Getting Hysterectomies In Beed?