IntersectionalityGender ‘Who Would We Be Without Male Gaze?’: On Sexuality, Body Image, And Growing Up Gay

'What male gaze has done for us, is what fire did for humanity. We are defined by the grammar of that gaze', writes the author.
By Sohini Sengupta Jul 4, 2022 6 min read
» Featured Image Source: Ritika Banerjee for Feminism In India

I do not think I would have realised or accepted that I was a “woman” without the first graze of the street-side gaze – the kind that gives you goosebumps and violins start playing off-key inside your head, as rose-tinted glasses of rage blind you. The soft raspy voice singing Bheege Hoth Tere as those innocent cow-like eyes branded my skin with shame and fear is one of the more delicate moments of teenage life. But what kind of woman would I have been without that gaze?

In a country like India, we are governed by the many-pronged rules of “Sanskriti” also known as culture in English, but it really does not translate the emotions or ethos of the original word. Now how does Sanskriti relate to the male gaze? Every feminist, ‘brain-washed‘ by Western philosophies, talks about the male gaze when truly, it is just a way to maintain discipline in society. The male gaze plays a huge role in keeping women in their lanes.

Growing up in the warm and safe cocoon of this Sanskriti, a woman can never feel violated. Right around the time a kid reaches the threshold of high school – hormones kick in. Girls are given a long list of things to do and not to do, among which avoiding the State-installed unemployed youth standing at curbs are right on top. The ogling eyes, occasional wolf whistles on the street, and the whispering and side-eye in the classroom, make sure that a girl’s energy is now divided between “becoming a woman” and being a student.

The gaze will soon make sure that a girl realises the power she wields. The electromagnetic pull of her secondary sexual characteristics is for her to manage. If you think the male gaze belongs to men alone, you are greatly mistaken. One of my earliest experiences of the gaze came from a kind aunt, who had ogled at my eight-year-old chest mounds and whispered something to mom.

Then of course, came the dutiful groping hands of cousins checking if I was turning into a woman correctly. A few strangers on the bus and the train rubbed their groin on our shoulders, or elbows on our breasts – making us realise that we are Midas.

But then came the more scrutinising forms of the male gaze. The ones that came from women – at festivals, train compartments, bank queues – ready with their hysterical twitching of the eyes to indicate your bra strap is out, disapproving squint eye at the plunging neckline or non-consensual pulling of a stranger’s top that had bared a sliver of their torso. Without the gaze, we would be lost! It would be anarchy of women who did whatever they pleased, who did not remember their bodies. I mean, not everyone can be allowed that.

To where does this gaze percolate? Women are trained to look at women as competition. The reductive image of a woman into body parts (think Anna Karenina through Godard’s lens) or into roles they need to play – women judge women based on the same accounts as the feminist-declared opposition does. Forget looking at another, looking into a mirror, a woman judges herself based on the media-run gaze that has been embedded in her conscience.

Elbows and buttocks, chins and knees do not belong in the same class of body parts. The gaze segregates, in scientific apartheid, what is sexual and what is not. Considering how easily confused women are, these women’s-body-made-easy guidelines benefit us immensely.

As a young girl, my first kiss was with another girl and my first heart break rendered at the hands of another girl – while I spent a considerable amount of time arm wrestling boys without a single crush on any of them. But I grew up straight and only recently discovered a closet full of memories and feelings. How is that possible? The gaze came to my rescue.

Groped and stared by so many individuals who were called boys and men could only mean one thing – this is the sexual relationship I was born for. The gaze saw me as Madonna or whore, mostly the second because my abrasive (non-feminine) qualities made it difficult to see me as a mother.

Nothing softens a “tom-boy” like some good old lathering of the gaze. Layers of personal experience and media/literature references later, I was a straight cis-woman on the conveyor belt, ready to take on the adult world in full power. What would we have done without the gaze of our culture, the gaze of our men?

Yet, there are so many young boys, girls and gender non-conforming kids growing up in our society – with satanic defiance. They see who they are so clearly that they have the capacity to blind the gaze. Heterosexuality is the only God in our sky, yet the queer cloud threatens us today with their free and loving voice. We should be considering male plugs soon. For the ears!

It is important to look at gaze in a national context, on the unofficial uniform code of culture that applies to us. The gaze that surveils a woman makes sure she comes home safely, gets married to keep the natural order of things alive, remains a sexual commodity of the husband to avoid becoming the sexual object of the mass, and understands her primary “biological” objective of producing babies and so on.

The relentless work of the gaze-rakshaks often go unappreciated. The cow-shed moment of October 2017 saw the Supreme Court of India ensure that married women, not being under eighteen years of age, cannot accuse her husband of rape. The filing system of the gaze ordains a woman with purpose, identity, rights and the lack of all three.

Gaze always reminds me of cows. Growing up in the sub-urb of Bengal meant I grew up with a fair share of these loving animals. Cows gaze with an unparalleled lack of intention. They have beautiful big eyes that gaze on without looking – as the country turns them into pawns for political benefits. Cows also remind me of women. The way we become holy and pious at one moment and in the next, factory line producers of milk/babies.

What male gaze has done for us, is what fire did for humanity. We are defined by the grammar of that gaze. I do not think we would have realised breasts and chests were different beyond the existence of mammary glands, if not for the lewd male gaze. I would have grown up gay and not strangely conscious of my body. Trans individuals would not be asked about their gender and surgeries. Cis women would not have had a framework to fit into or fight!

The men who make the rules, the cultural guidelines – the women who safeguard them as if their lives depended (it kind of does!)… make us women of the binary world; without them, we would be creatures of hormones and organs, living and loving equally. God(s) forbid such heavens to be installed in this godforsaken hell. (For the atheists, God loves everyone, just read the fine print.) 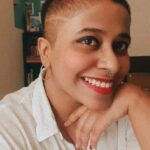