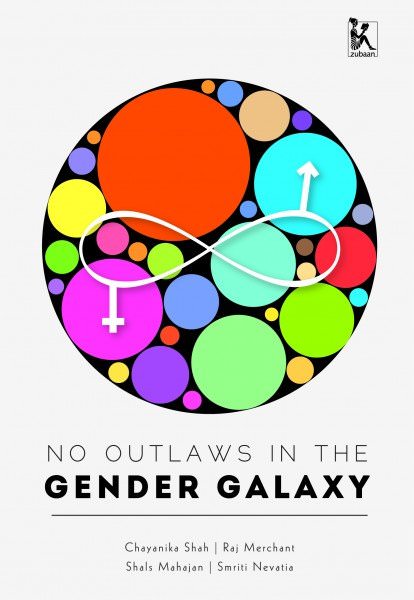 No Outlaws in the Gender Galaxy explores how gender plays out in public and private institutions like the family, educational institutions, work and public spaces. Looking at each of these independently, it elaborates the specific ways in which binary gender norms are woven into each arena and it also explores the multiple ways in which interlocking systems of heteronormativity, casteism, class and ableism are enmeshed within patriarchy to create exclusion, marginalisation, pathologisation and violence.

Book: No Outlaws In The Gender Galaxy

It is a book which challenges the very predominant idea of gender as a binary and its “naturalness” through stories of Persons Assigned Gender Female at Birth (PAGFB). With a 2013 research study by LABIA, ‘Breaking the binary: understanding concerns and realities of queer persons assigned gender female at birth across a spectrum of lived gender identities’, as the starting point, this book attempts to expand the popular perception of gender as a binary, ‘man’ and ‘woman’, to include the very wide spectrum which actually exists.

Gender does not exist by itself. Apart from the gender which is assigned at birth, it is also largely constructed. The rules for the same are passed on through social interactions, institutions, situations and so on. With the world around you telling you that you have to be either this or that, there is no space for anyone who does not confirm to this or that. Even with those who are trans*, there is this constant pressure to conform with either one of the gender binaries, or live in the constant fear of repercussions. This book, through stories of lived realities and experiences of queer PAGFB, speaks about the genders which exist between and beyond the two social accepted and rewarded binaries.

The fifty respondents whose interviews were used in this book are all those who were assigned gender female at birth but since then have been living non-heteronormative lives. The overall division of gender was into ‘man’, ‘woman’ and ‘other’, the respondents’ articulation of their gender identities varied greatly under each category. Some of the phrases used by them to self-identify include “woman with a difference”, “between transgender and lesbian”, “think as woman but not sure”, “society made me feel a woman but I have denied and challenged it” and so on. Apart from gender, the book also looks at the ways in which the respondents interact and negotiate with their family, educational institutions, public spaces, work spaces among the likes.

The four authors, and eleven researchers who worked first on the study and then on the book, all aim at one thing – to make the reader question the way we think about gender, not just with regards to ourselves, but, more importantly, with regards to others. They make us question the way we inevitably attempt to read a person’s gender using socially established largely heteronormative cues and signs. But the fact that these 50 people, and countless more, are currently living eschewing the binary system, with their own ‘self-chosen and self-assigned’ identities, tells us that ‘an open, porous, non-hierarchical and multiple gendered’ system is within our grasp if we just redesign our public spaces and institutions to facilitate the varied gender identities and re-think our perceptions of the same.

The book suggests a new term, gender ‘plasticity’ in place of ‘fluidity.’ Throughout the book, the authors have repeatedly emphasized on the need to think of gender not as an independently existing identity but as one which works in tandem with one’s locations on the basis of caste, class, sexual orientation, race, education and so on. Plasticity is a characteristic of gender which ensures that it can be crafted and re-crafted differently at different points based on “internally felt desire, which is influenced by external structures and metaphors prevalent in society.”

Though I self-identify as a woman, there are times when I feel like that is not accurate enough. Perhaps it is because I do not agree with the conventional idea of who a ‘woman’ is and with the societal codes assigned to women, or perhaps it is because it is suffocating to have to restrict your identity. Reading on, I came across some articulations of some of the ideas of gender and public space which almost seemed utopic in their openness and inclusivity. The idea of answering the whys aimed at one’s identity with a simple “Because that is how I feel” is what I learnt through the stories in this book.

You can purchase the book from Zubaan Books’ website here.

Global Nangsel - January 23, 2020 0
As we look around, we see protests, students agitated, universities attacked, and not to forget the other retrograde fascist Bills that await their turn in the Parliament to be passed and enacted.