Home Society Sports Inside Shahabad: The Nursery of Indian Women’s Hockey Where Stars Are Born 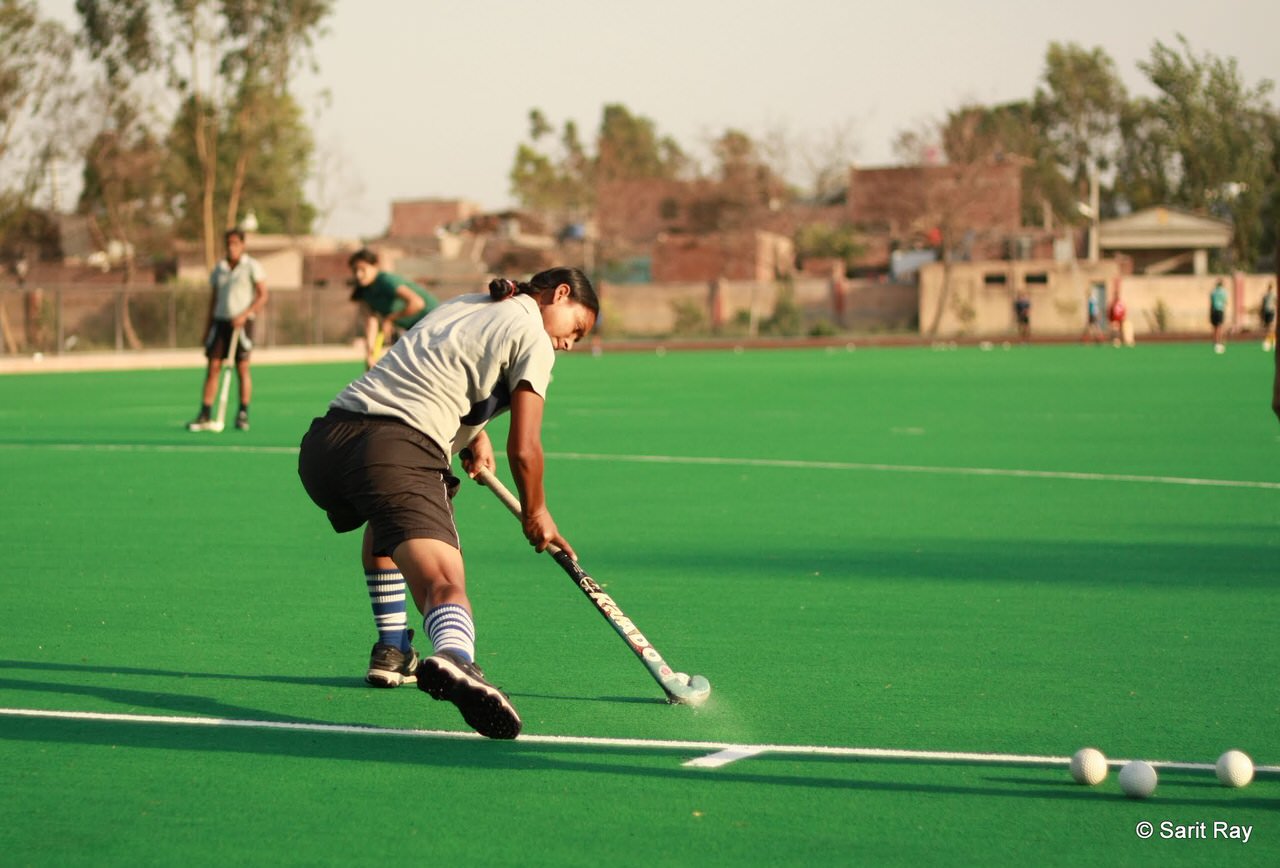 After 36 years, the Indian women’s hockey team has qualified for the Olympics. And there is no better place to understand what that means than in Shahabad – a little Highway town in Haryana that’s been the nursery of women’s hockey for over a decade

The year was 1980. The Olympics was held in Moscow that year. Russia was still USSR. And women’s hockey was introduced at the Olympics for the first time. India, already a force in men’s hockey by then, fielded a women’s team at that landmark Olympics. It would take 36 years for us to send a team again.

Why did it take so long? There’s the usual story of sports in India: lack of facilities, internal politics and interference, lack of financial backing to encourage more athletes to take up a non-cricketing sport.

But what about how we made it back? Things haven’t really changed that much in terms of financial backing or infrastructure. So, how did we find ourselves with a Olympics berth again? And more importantly, where does this long, 36-year road back to the global stage begin?

It begins in a sleepy little highway town off NH1.

The story of one academy, the so-called ‘Nursery of Indian women’s hockey’, is nothing short of a fairy-tale. Though things aren’t as simple as a Chak! De India. And the Shah Rukh Khan coach figure doesn’t quite get the glory that was rightfully his.

Three hours away from New Delhi, off National Highway 1, is the modest iron gate of the Shahabad Hockey Academy.
Outside, trucks ply their weary way past this sleepy little town. Inside, 70-odd girls practice on the lush Astroturf of a hockey academy credited with consistently producing the most talented players in Indian women’s hockey.

It’s 5 am on a midsummer morning. There’s barely any light in the sky yet. But it’s time for the daily practice session. There will be one more in the evening.

Girls, aged seven to 17, ride in on bicycles. The daily ritual starts with them watering the ground with sprinklers, washing the balls in a little pool of water, and then starting exercise.

Coach Baldev Singh observes them from the sidelines. Every player on the field is aware of his analytical gaze. The 62-year Dronacharya awardee runs the training academy like a military boot camp. A former player and men’s national team coach, he founded this academy and has run it since the mid-’80s. His white beard adds heft to his stern bearing, which occasionally slips when he animatedly yells at a player in chaste Punjabi, or shadow swings to show how a scoop shot should be executed.

In Shahabad, this man has earned the respect reserved for the gods. This is because his efforts have turned these girls into celebrated heroes.

Conversations in sleepy Shahabad invariably revolve around them, so much so that their rigorous twice-a-day, everyday hockey practice sessions are part of Shahabad’s routine.

The 5am practice session for the girls – and a small group of boys (the academy has only recently started letting them in) – ends at 7 am. Two large cans of milk have just arrived. This is part of the standard-issue breakfast: Bread, butter, two bananas, cubes of raw paneer, and a steel mug full of steaming milk. It all disappears in minutes. Then the players are off to school, college or work, but everyone will be back for evening practice at 3 pm.

Thanks to this gruelling regime, an obscure Haryanvi town has produced 30 international women’s hockey players in the last 15 years. It’s an impressive statistic, one that stands testament to the sporting talent hidden in small-town India.

In a state with a notoriously skewed sex ratio, this track record is nothing short of a miracle. But things weren’t always this way in Shahabad. There was initial resistance from parents about sending their girls out to play hockey. That changed in the early ’90s, when players from the academy started making the national squad.

The fact that an earlier batch of men from Shahabad had played for India also helped. But the biggest factor was the economic incentive coupled with the exposure to a world outside. “Those who would have never gone to Delhi are now going to America. Hockey also brought with it sports-quota government jobs. And as one batch of girls got fame and money, they served as role models for the next,” Singh says.

Fame and money are, of course, relative. And unless the sport you play is cricket, the perks are small. Consider, for instance, the case of Rani Rampal. The 18-year-old is India’s top striker, and was named in the International Hockey Federation’s All Star Team in 2010. That year, the team picked up the silver medal at the Asia Cup. To use an analogy would be to call her the Virat Kohli of Indian women’s hockey. But while Virat has a Rs 1 crore a year BCCI contract – endorsements and IPL aside – Rani’s job as an Indian Railways clerk in nearby Ambala earns her Rs 10,000 a month, besides a Rs 4,000 scholarship from the GoSports Foundation.

Yet, Rani’s comparatively humble hockey earnings are perhaps more cherished and significant, because of the respect and sense of self-worth the sport has given her: Rani’s father works as a cart-puller and her brother works as a carpenter. Their modest home is actually just a room, and it is full of trophies, medals and badges that Rani has won at tournaments all over the world. Most of the medals hang off a portrait of Rani’s late grandfather who encouraged her to play. Right below it is a photograph of Rani with her childhood icon, Argentine midfielder Luciana Aymar. This wall is a microcosm of the Shahabad story.

Seventeen-year-old goalkeeper Sukhmani Virk is a farmer’s daughter. Her family lives in a house that has mosaic floors and running water, which is something of a luxury in Shahabad. Her constantly beaming father shows off his daughter’s trophies. Her mother, while chopping vegetables for lunch, tells us she never had any qualms about having a daughter: “She makes us as happy as any boy could.” She got married young and became a housewife, but she doesn’t want that for Sukhmani: “She’ll get married when she wants to. And we’ll marry her only [into] a family that allows her to continue working.”

Similarly supportive are the parents of Navneet Kaur who, at 15, is the youngest member of the Indian women’s squad. Her father, Buta Singh, runs a TV servicing shop. Singh played cricket as a kid. He says, “I didn’t understand anything about hockey until Navneet came back from school and said she wanted to play.”

The “school” is the only one in Shahabad, a government-sponsored one that shares a wall with the hockey academy. Here, the hockey-playing girls are the cool kids, the icons. “Rani didi” is the hero the kids look up to, and there’s a picture of her in a Team India jersey in the principal’s room, hung higher than the plaque with the school toppers’ names.

The many trophies from the Junior Nehru Girls Hockey Tournament (the all-India school meet) stand like a proud battalion – the school has won 11 of the 15 tournaments since 1997.

Sports – such as wrestling, archery and kabaddi – has long been a modest ticket to a better life for small-town India.

For the girls of Shahabad, that ticket is hockey. Jasjeet Kaur, 25, followed sister Rajwinder into hockey, and at 17, got a job with the Indian Railways. “If it wasn’t for hockey, I wouldn’t have a job, even if I’d been a brilliant student.”

Opportunities are few in Shahabad, and the sport has become one of the few avenues that hold promise. Back at Singh’s academy, evening practice is underway. The players are divided by age-based groups, and one round of exercise is followed by friendly matches. Even the youngest girls tackle and handle the ball effortlessly on their sticks while darting around the field. They are lean and tough. Their short-sleeved jerseys and shorts show off strong biceps, wrists and calf muscles.

Even the young ones are as tough as hockey sticks. Twelve-year-old Udham Singh has just got whacked on his head by a stray, powerfully hit ball. The seniors check for serious injuries. But the only consolation Udham now gets, silent tears streaming down his face, ice pack clutched to his head, is: “Sher ko chot nahi lagti (A tiger doesn’t show pain)”.

A back injury forced former fullback, 27-year-old Rajwinder Kaur, to stop playing. Now she coaches at the academy in the evenings and works as a chief ticket inspector in Ambala by day. Last November, she got married. If she hadn’t got injured, she says she would have kept playing or coaching and never got married. It may not have gone down well with her family but would have made coach Singh happy. Singh isn’t against marriage, but at two years past retirement age, he’s worried about the academy’s future. He doesn’t think a married girl will have the time to invest that he does. “It’s the biggest setback,” Singh says. “These girls completely give up the sport after marriage. And then, all the years of hard work goes down the drain.”

In this, Shahabad’s women face the same obstacles as other women across the country, even in cities. Once they are married, their own careers become a lesser priority, particularly when it is as time-consuming as professional sports, hockey with its practice schedules and tournaments that require the girls to travel.

But things aren’t entirely bleak. The government of Haryana – it provides the equipment and food supplies for Singh’s academy – has sanctioned a hostel on the facility as well as floodlights. And large flags, which Singh specifically requested.

“Didn’t you miss the ground and drive past it? I don’t want that to happen. When people on the highway drive by the stadium, they should notice it and know that this is the nursery of Indian women’s hockey.”

It’s visibility that Singh seeks. And it’s precisely what these talented girls from Shahabad need. Maybe the flags will help.

Some sources believe the story of coach Baldev Singh, and the Shahabad girls, was one of the inspirations for the 2007 movie, Chakde! India.

Rani Rampal will shoulder India’s hopes at Rio 2016. She is still supported by the GoSports Foundation, who are giving her Rs 75,000 this year, and hockey sticks.

The story was originally written for Elle India Magazine. However, it was never published. It was later published on the writer’s Mediumblog here. The writer now edits the lifestyle supplement, HT48Hours at Hindustan Times, Mumbai. He tweets as @saritray2001.

Mumbai Pune Mumbai 3 Does A Disservice To Abortion Rights

Trump’s Global Gag Rule On Abortion And How It Affects Sexual...

Meeting Societal Expectations Of Right And Wrong With “Hijab”