History, when read from a feminist’s perspective, can easily be seen as ‘his story’ – the story of men and their exploits, written by men. In this male dominant narrative, women have been deprived of voice, and their lives, opinions and endeavours have gone unnoticed. When selectively studying history, as an attempt to unearth these females heroes, one is surprised by the presence of so many women who deserved to be known, but never were.

Operating within male dominion, the position of Muslim women is often questioned more than the rest. The phrase ‘Muslim women’ in itself, evokes responses filled with prejudice that limit the scope of studying and appreciating the life of Muslim women throughout the world. People might be somewhat aware of contemporary Muslim leaders, but the medieval and early-modern Muslim women are rarely known and talked about in Islamic history. However, there are a large number of Muslim women in history who have held important positions like mystics, rulers, warriors, intellectuals among others. The following is a brief account of some of these women.

Born in 555 AD, Khadijah was the wife of Prophet Muhammed and has the distinction of being the first Muslim. She was born in a merchant family in the Quraysh tribe of Mecca, and effectively learned the business of trade from her father. Soon after her father’s death she took over the business, and mainly traded between Mecca, Syria, and Yemen. At a time when trades and businesses were completely dominated by men, she was one of the most successful traders of Mecca and was known for her honesty and benevolence. She is known to have often fed and clothed the poor and also assisted her relatives in need.

Khadijah’s mausoleum in Mecca before destruction. (Image from Wikipedia Commons.)

Before marrying the Prophet, she had been widowed twice and had decided that she would not marry again. However, after hiring the Prophet for taking her trading caravans to Syria, she was impressed by his honesty and reconsidered the prospect of marriage. It was Khadijah who, through a friend, approached the Prophet with a marriage proposal, to which he consented. It was an unconventional marriage where the Prophet was 25, while Khadijah was 40. She supported him morally and financially at the time when he attained his Prophethood. It was a monogamous union which lasted for 25 years till Khadija’s death. 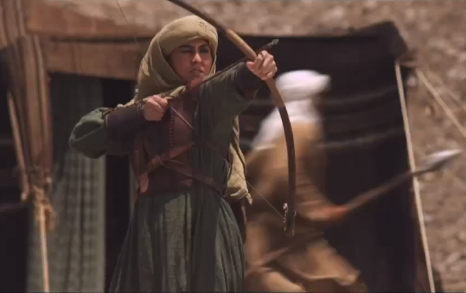 Nusayba b. Ka’b as depicted in the MBC TV Series ‘Umar’ (Image from painting-mythology.blogspot.in)

Nusaybah Bint Ka’ab was a member of the Banu Najjar tribe of Madinah, and was renowned for her bravery on the battlefields. Her name as a warrior is associated with many battles like the Second Bait-ul-‘Aqabah, the Battle of Uhud, the Battle of Hunayn, the war of Yamamah, and the Treaty of Hudaybiyah. In the Battle of Uhud, she was a companion and protector of Prophet Muhammed. The latter is reported to have said that in whichever direction he turned himself, he could see her defending and protecting him. She sustained 12 injuries in this battle before she fainted. When she regained consciousness a day later, her first questions were of the Prophet’s well-being. She also fought in the battle against Musaylamah Al-Kadthab, in which she lost her son, and herself sustained many injuries.

Aisha is remembered as the youngest wife of Prophet Muhammed, and one of the most beloved. However, apart from being a wife, she was also a scholar, and played a major role in the politics of her times. She is known to have narrated 2210 hadiths (traditions containing sayings of the prophet Muhammad which, with accounts of his daily practice (the Sunna), constitute the major source of guidance for Muslims apart from the Quran) about various topics including those about inheritance and pilgrimage. After the death of the Prophet her relevance in the Islamic community increased manyfold. She defied the growing patriarchal constructs by taking to public speech even though she continued to veil herself. After the death of the Uthman, she led an army against the 4th caliph Ali in the Battle of the Camel in 656 CE. She lost the Battle but it lay a prominent mark on her legacy.

After this loss on the battlefield, she retreated to the home and started translating hadiths and spreading the Islamic word. Even though her retreat is sometimes looked at as an example of women’s failure in defying patriarchy, yet it was a historically important attempt at the same as it laid the ground for generations after her.

Born in Basra, Iraq, Rabia was one of the most important Muslim Sufi saints and poets. In the early parts of her life, she was a slave in South Iraq till she gained her freedom. Her ideas of spirituality are considered of utmost importance in the early Sufi tradition, and she is considered one of the founders of the tradition of ‘Divine Love’, which focusses on love of God for the sake of love itself, rather than coming out of fear or for favours. She chose the life of asceticism over domesticity as she declined various marriage proposals. She lived in seclusion, that ofttimes brought poverty, and yet her ascetic rigour did not fade.

Many men and women approached her often, for her spiritual guidance, and her knowledge of the Sufi traditions. John Renard notes in his Historical Dictionary of Sufism (2005), “She is one of the few women who consistently merited a place in hagiographic anthologies over the centuries.”

Lubna lived in the 10th century CE, and was brought up in the palace of Sultan Abd al -Rahman III. Many different talents and works have been attributed to her, but she never rose to popularity. She was in charge of the Royal library at the Andalusian court, which had around 500 thousand books at that time and was one of the most important libraries of the world. During her lifetime, she worked as a secretary to the Khalifa, as a scribe, and later as the personal secretary of Abd Al-Rahman’s son Hakam II Ibn Abdur-Rahman. However, her knowledge and expertise were not limited to writing and translating, but she was also a mathematician and is known to have taught mathematical equations to children on the street. To add to all of these, she was also a poet and a calligrapher.

A lot is not known about Lubna as there are very few historical records about her. The once that exist are often questioned for their reliability, and credibility. It is often proposed that Luban might not have been one person, but rather two different women named Lubna and Fatima, who collectively possessed these talents but have been mixed in the pages of history. Whatever may be the truth behind these speculations, it cannot be denied that such talented and well-learned women existed, but their lives were not well documented.

Born in 1048 AD, Arwa was orphaned at a young age and adopted by her uncle and aunt, who were then the rulers of Yemen. She was tutored by the queen and later married the prince at the age of 17. When the king and queen died in a series of traumatic events, and the prince could not rule because of his ill health and paralysis, Arwa came to the throne as the singular ruler of Yemen. Soon after she came to power she shifted the capital of the kingdom from Sana’a to Jibla, to be in a better position to rule and also to avenge the late king’s death by destroying the Najahid ruler, Said ibn Najar. She managed to do so in 1088.

She is known to have built many schools throughout her realm, and improved the economy significantly. The chronicles of the time address her as a brave, independent woman, possessing wonderful intellect and reasoning. She never lost the support of her people, and was affectionately called the ‘little queen of Sheba’. She remained in power until her death in 1138. Sayyida was born in the Kingdom of Granada, the last Muslim ruled state in Spain. Her family moved to Morocco after the fall of the empire in the year 1492. She, along with her first husband rebuild the city of Tetouan in Northern Morocco, which she later ruled alone after the death of her husband in 1515. Her actual name is unknown and the name Sayyida al Hurra (meaning noble lady who is free and independent; the woman sovereign who bows to no superior authority) has been prescribed to her because of her strong and bold nature. She became the last person in Islamic history to hold the title of al Hurra (meaning the queen). She is also known as Hakima Tatwan, meaning Governor of Tetouan.

Sayyida was an unconventional queen with the title of ‘pirate queen’ often being ascribed to her. She controlled a large part of the Western Mediterranean sea with her pirate fleet that she used to dominate over the Spanish and Portuguese ships. When she later married the king of Morocco, she had no intention of giving up her power, and instead of going to the capital city she made the King come over to Tetouan. This is the first and only time in the history of Morocco that the king did not get married in the capital.  After 30 years of rule, she was deposed by her son-in-law, and her later fate remains unknown. She vanished from history altogether.

The lives of these women have often been ignored while studying and talking about Islamic history. Their challenges, accomplishments, etc deserved to be known but never were. Given the social context in which these women lived, everything that they could achieve required them to put up a fight, to be fearless in the face of constraints, and unapologetic of their own identities.

While it is true that a lot of things in the lives of these women were still governed by patriarchal and societal traditions, the many things they could manage to fight and change were a precursor to a larger struggle that was yet to come, and continues to take shape even today. This article (and the list of women mentioned) is in no way exhaustive of the women we must know of and duly appreciate, but a mere subset of the many people in history gone unnoticed. It is an attempt to retrace history for a more inclusive and real representation.