HealthMental Health We Saw The Magnitude Of The #MeToo Campaign. What’s Next?

We Saw The Magnitude Of The #MeToo Campaign. What’s Next?

The viral #MeToo campaign is not perfect, nor is it the end of the journey for survivors of sexual assault and harassment.
By Ruchika Agarwal Dec 8, 2017 4 min read

The #MeToo campaign has struck like a tsunami on the patriarchal power structures oppressing, coercing and sexually assaulting women. So much so that ‘The Silence Breakers’ – women and men from all walks of life who have refused to comply with the culture of sexual assault in their respective workplaces, have been named Person of the Year by Time Magazine. This is a huge change in pace after the sexual-predator-in-chief of the United States, Donald Trump was named Person of the Year last year.

The online movement shifted the conversation surrounding sexual assault internationally. With all the public personalities coming out with their stories, sexual predators have lost their jobs and have been scrutinized under the spotlight by allies and other powerful men.

But some who spoke out have been met with silence and/or denial. And even though data always showed the high prevalence of sexual assault around the world, the high volume of women and men speaking out about their experiences on social media has driven the point home.

Even coming forward and fighting to be heard and believed is influenced by the privilege a woman carries.

The public outcry has provided courage and comfort for many more to come forward with their stories, take action against the abusers and reclaim their power. It has resensitized those who dismissed or normalized the prevalence of sexual harassment and assault in the day-to-day lives of many. The world is now beginning to see that the choice between preserving self-respect and dignity or moving forward in the workplace is not a choice anyone should have to face.

But while the #MeToo campaign is a step ahead in keeping perpetrators in check, when it comes to taking away the shame and stigma generally associated with assault and changing rape culture, it is not perfect. It is important to note that many of those who have had the courage to speak up and bring the movement to the scale, and who are honoured on the cover of the magazine include Alyssa Milano, Ashley Judd, Rose McGowan, Megyn Kelly and Taylor Swift are white, famous and wealthy.

Even coming forward and fighting to be heard and believed is influenced by the privilege a woman carries. Just the fact that the founder of the #MeToo movement back in 2006 – Tarana Burke, a woman of colour, wasn’t able to garner international attention is proof of that. In fact, Crystal Washington, one of those honoured for speaking up on harassment at her job in the hospitality industry, and a woman of colour, still goes to work at the Plaza Hotel and faces the man she has accused every day because she can’t afford to quit her job.

Also Read: A Take On #MeToo From Two Sides Of The Gender Galaxy

Additionally, there is an important conversation related to sexual assault that has still not become mainstream. The movement doesn’t represent or solve the battles women living with sexual assault trauma fight every day. Talking about the story of every survivor, shunning every perpetrator is not representative of the permanent damage caused by sexual assault or harassment. Even after reporting the crime, survivors do not always have access to the right treatment and care needed to recover.

Sexual assault and harassment are traumatic. To cope with that trauma, the body alters neurological functions which affect memory and recollection of the event. Sexual harassment and assault are forms of asserting power and ownership over someone else. Survivors frequently feel the loss of bodily autonomy after the incident. As a result, many suffer from depression.

In order to regain control over their bodies, many also resort to eating disorders or self-harm. The fear of similar incidents recurring can also result in severe anxiety. For many survivors, it is a constant struggle to get away and move on from the trauma. Watching a powerful leader say, “Grab ‘em by the pussy”, or even seeing the innumerable tweets and posts about others’ survival stories as part of the #MeToo campaign can be a trigger, making them feel like they can’t escape the reminders of the trauma.

Survivors frequently feel the loss of bodily autonomy after the incident. As a result, many suffer from depression.

Studies have also shown that about 30 out of 100 women suffer from Post Traumatic Stress Disorder (PTSD), even months after the incident. About 1 in 3 women who are survivors, will at some point, experience the symptoms of PTSD that include frequent flashbacks of the assault, nightmares, difficulty in sleeping, jumpiness and irritability.

The #MeToo campaign is a step forward, but only the first in a long journey to end systemic patriarchal power structures, rape culture and objectification of women. What it does is show that the problem exists and that women around the world are no longer going to be complicit with those power structures.

Predators are slowly, but surely, being held responsible for their actions. The world is seeing that it can run, and should run, without these criminals. But the various forms of privilege that play into how survivors are reporting these incidents or believed, needs to be recognized. The trauma and PTSD that survivors will bear for the rest of their lives still need to be seen as real and damaging. They need to be addressed with mental health recovery tools. That is the next step forward.

Also Read: Lessons We Can All Learn From John Oliver 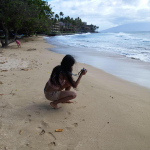 Could Aruvi Be Feminist?