On the evening of June 6, a hate crime was committed by Delhi Police outside Hauz Khas Village’s Summer House Cafe. They lathi charged, slapped, and verbally abused a gay man for hugging his friend who happens to be a trans person. His two friends – one of them, a woman from South India was referred to as a “Nigerian who must be thrown out” and anti-black slurs were hurled at her; the other, a trans woman was labeled an “escort”. The assault victim too was subjected to a series of vulgar homophobic insults. When the police started physically assaulting him, the victim said he started documenting the ordeal with his phone. As he started taking pictures of the service jeep belonging to the constables for evidence, they instantaneously snatched his phone and took him and his friend to Hauz Khas Police Station to detain them.

According to the victim’s tweets, they managed to call his friend’s father who came to collect them and they were finally released under the condition that they sign an undertaking assuring that the victim will delete all the pictures. This account of police misconduct, however, came to light anyway when the victim’s friends started sharing it on social media and requested their followers to retweet and repost. In one of the voice recording he sent to his friends, the victim sounds distraught and shaken by the episode as he describes how he was called a “hijra” and a “chakka” in public by the cops and some bystanders.

@PMOIndia @DelhiPolice
Last night I was violently attacked by a group of police constables outside a popular pub in Delhi called #summerhouse and got dragged to a police station. Their reason was that I hugged a friend to see her off (who’s a Trans person). #policemisconduct

The police and the queer community in general have always shared a tumultuous relationship ever since the conception of the queer movement. In India, after we began asserting ourselves and started demanding our own spaces, queer folks have been increasingly subjected to mob and police brutality.

This isn’t the first time the queer community had experienced intimidation from the Delhi police. Harassment is a common occurrence not only with the police but also with other authority personnels. Back in May, a victim had shared with me, a similar encounter that took place in a prominent neighbourhood in South Delhi. He said when he was on his way to the grocery store, a group of policemen stopped their bikes and jeered at him, asking him whether he was a boy or a girl and then proceeded to interrogate him on “How much he charged for the night“. Considering the numerous instances of the police abusing their authoritative power whether it’d be assaulting unarmed students or colluding with the ruling party, it appears that the motto of Delhi Police – Shanti, Seva, Nyaya (Peace, Service, and Justice) is a travesty of the ground reality. 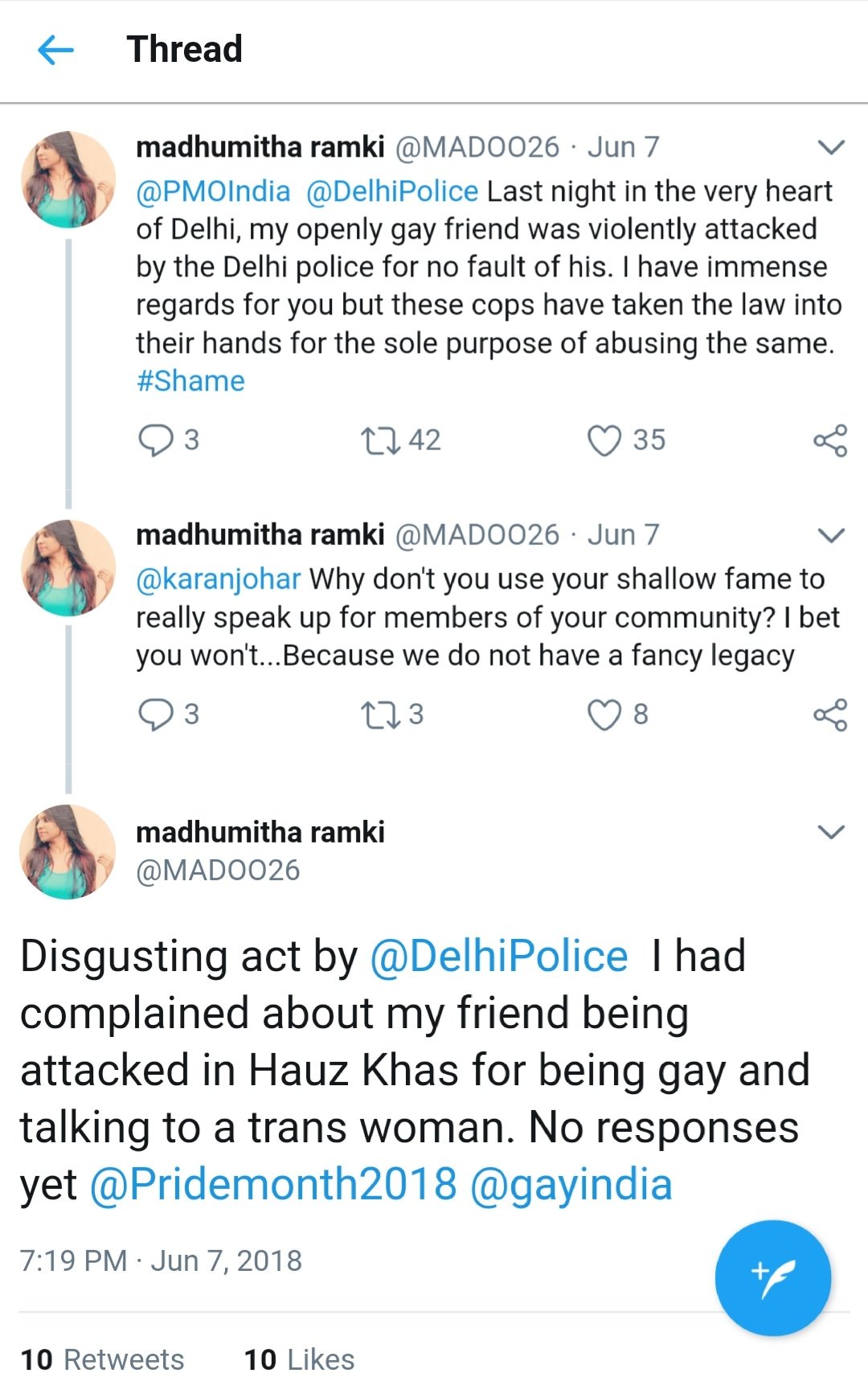 Pride month in India is entwined with prejudice. Just two days before this incident, Kerala’s High Court ordered a ‘psychological and medical examination’ of a 25-year-old trans woman after her mother moved a petition saying her ‘son’ is brainwashed by a ‘transgender gang’. In late May, three trans women were ruthlessly beaten up by MNS workers in Mumbai’s Thane. A group of trans women were also recently attacked by a mob in Hyderabad due to a fake WhatsApp message accusing them of being child kidnappers. One of the women succumbed to her injuries shortly after. She was 21 years old.

When the system and society fails to even properly acknowledge the existence of its marginalised citizens and continually denies them their rights, it is difficult to deny that queer pacifism has become rather futile. It must be remembered that while the Delhi Police may wave rainbow flags at Pride, they have blood in their hands and contempt in their mouth.

Perhaps the community needs to re-evaluate where it stands and collectively decide if there is a need to take more radical steps to ensure that these rights are no longer dismissed and ensure that our existence is no longer threatened with violence. Queer liberation remains a distant dream for many of us, not because it is not possible but because the movement remains scattered and in many cases, passive.

Twitter, the Online World and Many Faces of Gender Based Violence

Simp Culture: The Enemies Of Patriarchy Are Friends Of Feminists!

Depression In Indian Women: The Why And How Of It