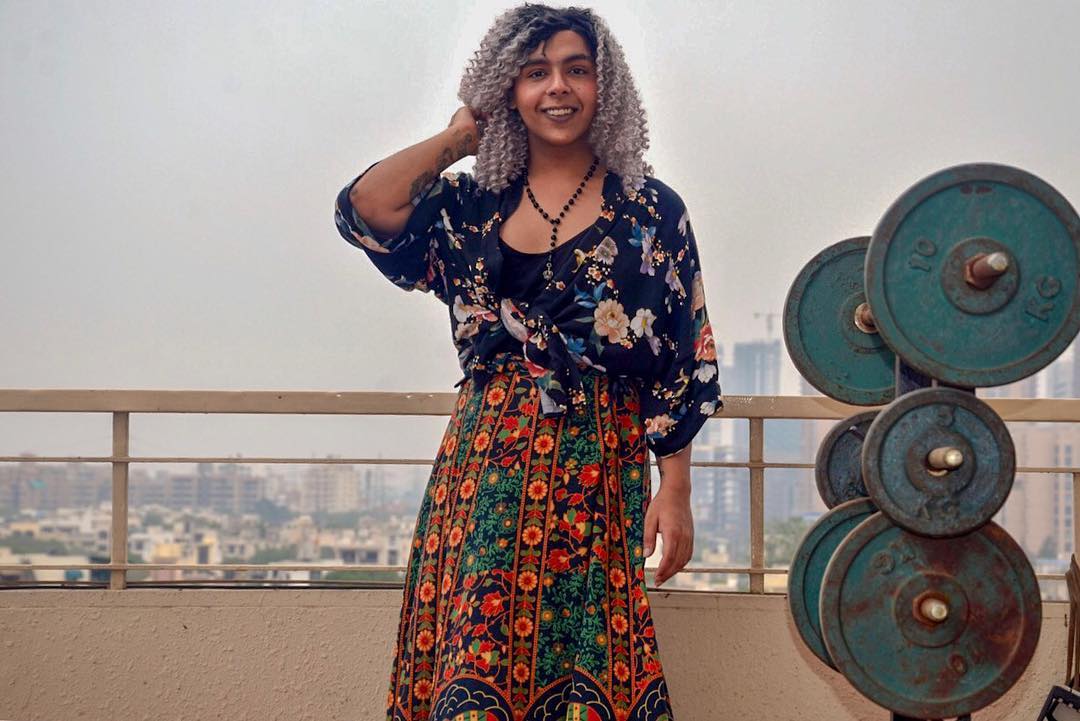 From walking the ramp for Pranav Mishra and Shyma Reddy’s brand Huemn at the Amazon Fashion Week, getting featured on Cosmopolitan Magazine, to taking her activism for queer rights both online and offline, Taksh Sharma has been making waves in the Indian fashion scene as well as on social media where she is popularly known as Kawaiibloggerchan, a name she says was inspired by her love for Japanese pop culture and fashion.

Taksh Sharma describes herself as a “stylist, occasional model, who reads and writes a lot, and someone who’s very passionate about fashion”. Her soft punk aesthetic giving hints of Harajuku street fashion is well received by her thousands of followers who sometimes affectionately refer to her as the “mother of soft punk”.

I have been admiring Taksh’s work for quite some time and finally got a chance to meet her at her house where we discussed issues ranging from feminism to where to get chunky shoes while we sat in her room and enjoyed enormous cups of steaming chai. Read on to know more about the model breaking glass ceilings!

Ruth: How would your friends describe Taksh Sharma?

Ruth: What’s the story behind your style? Your outfits give off a lot of Japanese street vibes and your username is Kawaiibloggerchan on social media. How has Japanese pop culture inspired your style?

Taksh: Yeah I mean, when I was really young I remember after school sitting in my grandfather’s Pooja walla room, his TV had a lot of channels so I stumbled on a lot of lifestyle channels like TLC, Fashion TV and also at the same time, there’s this TV channel called Animax. So yeah, it kind of happened almost organically. I was moving on from cartoons to anime because the storylines that they were delivering and the subject matters were a lot more interesting. And also from these shows, I learned about Harajuku as a subculture. Gradually, with the music I was listening to and because of the internet I was really into the Goth subculture so it was a lot of that as well. Kawaiibloggerchan is a term I came up with because it seemed like it made sense – Kawaii means cute and Chan is a suffix used to describe someone younger or cuter, so I thought it would be a fun handle.

For me, it’s insane how people think that they can identify as “not feminist”.

Ruth: I read a previous interview where you were passionately talking about feminism. Who would you consider as your feminist icon and what is feminism to you?

Taksh: For me, it’s insane how people think that they can identify as “not feminist”. Feminism to me is such an integral part of my life – it influences my politics, the way I interact with the world. I always find it difficult to describe what feminism means to me but to me, feminism is my grandma who was the only girl in her village to go to an all-male school, to graduate, get a job, and marry my grandfather. For me the kind of drive that would push someone to do that is feminism. For me, feminism is my mother being a highly respected doctor now after having made through all of the things she had to go through. As far as icons go, I think Alok Vaid-Menon definitely is surely high on the list for me because they’ve proved that intersectionality is important.

Ruth: What would you like to see change in the Indian queer movement?

Taksh: I would definitely like more inclusivity. It’s very tiring seeing the same types of people, the same faces – it’s almost like archetypes. A lot of these people tend to have a certain set of beliefs that they espouse in public but a whole other set of beliefs that they hold in private and that to me is really exhausting. We haven’t reached a point in the struggle in this country where we can treat this like just another political dimension. We still need to establish something before we all try to be spokespeople for the cause, before all of us try to be notable public figures and become celebrities to kind of like profit off of that. I think it’s pretty bullshit – the idea that if you can’t do anything else, oh wait! I can always “work” for the community and then just take money from that.

The movement is still dominated by Savarna cis-men; that too Savarna cis-men who are economically very well off. So it’s a whole other class struggle that they don’t really recognise and they’re not quite aware of the ground realities of what it’s like to be queer in this country.

The movement is still dominated by Savarna Cis-men; that too Savarna cis-men who are economically very well off.

Ruth: Expanding on the previous question, what would you like to see change in the Indian feminist movement?

Taksh: If your feminism is not intersectional, it’s not feminism. It’s that simple. You have to stand up for women that you don’t like. Another thing that I would like to see change in the feminist movement is sex worker exclusionary feminism! In India, you come into this peculiar morality and it’s very woven into our culture and there is this respectability politics game that happens a lot in any space that you go to. I’ve seen so many women who are ready to drop all their feminist ideals just because the person that they’re sticking up for happens to be someone in they don’t like or they don’t agree with the way that XYZ person has lived their life. I think your feminism has to stick up for all women.

Ruth: Alright, Let’s talk about fashion now. How has fashion helped you explore your sexuality?

Taksh: In every single way! For me modelling is the most gratifying thing in the world because it is one of the only few times I get to fully see myself realised as a woman. Being a trans woman, it’s so difficult, because constantly you tend to think – What about you is invalidating your energy to the world? What is the giveaway? What is going to lead me into being clocked? Modelling has been what had led me to solidify my own identity. Fashion has always helped me express myself and has always been a place for me to find refuge – it’s made me happy whether it was making fashion sketches when I was younger so other kids wouldn’t pick on me to reading about Alexander McQueen when I was really misunderstood.

Ruth: Do you have any message for trans kids whose parents don’t accept them?

Taksh: I’d tell them to get out as soon as they can. Focus every bit of their energy on removing yourself from this space where you can’t be who you want to be. Realise that it’s going to be worth it. If it means that denying yourself right now, put all that energy into getting out because some of the fiercest people I have ever known have been people who have gone through situations such as this and when they blossom, they blossom so fiercely. So I’d tell trans kids who are in these situations to not give up hope ever!

Very few people can claim to have seen life from both sides of the coin. Having lived as an unhappy boy for the first twenty two years of my life, I can say without a shred of doubt that it gets so much better. The best advice I ever got was “your transition is a journey, not a destination.” I am overjoyed to have such loving parents and competent medical professionals along with me on this journey. Fortis Hospital held a press conference a few days after my birthday to showcase how life altering gender affirmation surgery can be for those of us who suffer from dysphoria. I was so nervous the entire time and really unsure about how I looked. I know it sounds so silly – there i was, about to open up to the Indian Media (who aren’t known for their sensitivity in the best of times) but my biggest concern was “i don’t look fat right?? My hair looks okay na??” I am very protective of my right to be vapid, vain and obsessed with material things. I treat it like an armour. This attitude has gotten me through the toughest of times. Everyone wants to hear about our struggles, everyone wants to sympathise with our sorrows so that they in turn feel better. I’m not interested in giving anyone any Good Guy Badges. I’m not here to be a sob story. I came here solely to serve looks, gag the children and make em go “yaaaaaaasss bitch”. That is my higher purpose. Shoutout to @145east for the stunning skirt. #transfemme #transgender #highfemme #NotYourSobStory #SheCameToServe #PullingStuntsOnYourLocalNews #girlslikeus

Ruth: While we’re on that topic, do you have any advice for those who are looking into the possibility transitioning?

Taksh: I’d say that hormone replacement therapy is a really involving process, it’s really tiring. You need to go to a psychiatrist, a counsellor. It took me 6 months before I could get the certificate of approval for surgery from my psychiatrist. You need to be consulting a doctor. I tell any person that’s looking into transitioning to see a doctor. Don’t try to just do it by yourself after looking it up online. It’s really dangerous, because hormones have an effect on your liver and your kidneys and I have to have regular blood tests every other month just to make sure that my levels are all balanced. It’s not worth it to take hormones secretly, hiding it from your parents, family, healthcare providers – don’t do it. Please transition when you’re in a condition stable enough to do it.

Ruth: What are your plans for the rest of twenty-gay-teen?

Taksh: Haa twenty-gay-teen! Currently I don’t have any upcoming projects. I’m just trying to make sure that I’m doing better health-wise. My plans for twenty-gay-teen is to seek some meaningful employment hopefully and to be working in fashion in some sort of capacity. I would really like that. By the end of this year, I’ll hopefully have consolidated my portfolio and see where that leads me.

How India Responded To State-Sponsored Oppression Through Art

Jhalkari Bai: The Indian Rebellion Of 1857 And Forgotten Dalit History...