The Undue Outrage On AIB’s Take On Raksha Bandhan

AIB is often criticised for its feminist ideas and pro-woman stance and when that exists with the condemnation of a tradition.
By Akshita Prasad Sep 4, 2018 4 min read

What makes All India Bakchod, or AIB, as it is popularly known, stand out among the numerous comedy groups and comedians that exist and thrive today? It has to be their feminist content and sketches about women and their afflictions in a patriarchal society. A comedy group that often creates feminist content shrouded in hilarity, which enables their message to reach a larger audience base, is what sets AIB apart amongst the scads of comedy available at our disposable today.

AIB’s take on what matters doesn’t end with a few hilarious sketches and the much-needed podcasts, AIB delves into the turbulent relationship between women, sexism, and patriarchy through thought-provoking posts on their social media channels as well.

Also read: A Review Of AIB’s ‘A Woman’s Besties’

Keeping with their tradition of not condoning patriarchy, this raksha bandhan, AIB made a post about the inevitable hypocrisy of the festival owing to its patriarchal roots. The long post made on their social media channels stated that the reason women are unsafe in this country is due to patriarchy and for the same patriarchy to birth a tradition which allows its beneficiaries, that is men, to protect women, whose lives patriarchy negatively affects, is audacious and fatuous. 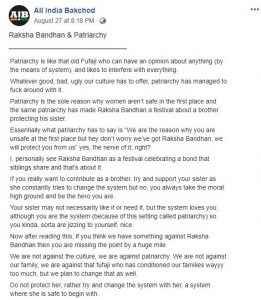 They went on to say that they aren’t against the tradition of rakhi if it is to celebrate the bond, affection, and love between siblings, but oppose it if it is about protecting women – who would much rather have their male siblings as an ally in changing the present social landscape to accommodate them and doesn’t allow for them to be pushed to the sidelines, instead of being protected by them.

This sensible and much-needed post garnered the wrath of many online, who condemned the group for being against our culture, having a colonial hangover where they can only appreciate anything adopted from the West, and interestingly, but not surprisingly, for taking a seemingly feminist stance.

None of the hate garnered by AIB must come as a surprise to them. They are often criticised for their feminist ideas and pro-woman stance and when that coincides with the condemnation of a tradition. They couldn’t have expected anything better than the hate they received. We have seen numerous examples over the years of how anyone who condemns certain regressive aspects of our culture will be mocked, threatened, and shunned.

AIB is often criticised for their feminist ideas and pro-woman stance and when that exists with the condemnation of a tradition.

A lot of our culture is shaped by patriarchy and to preserve it means to protect the patriarchy that has glaring and even nuanced negative effects on the lives of every individual woman and the cause of women as a whole. But we are resistant to any change that threatens this culture we take so much pride in, except we fail to see that we can take pride in our culture and participate in it even if it keeps up with the changing social landscape of the world.

Raksha bandhan, a festival where sisters are promised protection by their brothers, is celebrated this way only due to our idea that strong, capable men have to protect the weak, fragile women, who will need protection in this world. Traditionally, even older sisters don’t promise to protect their little brothers on rakhi, because women aren’t designed to protect, but to be protected, at least that is what patriarchy teaches us and reiterates it every chance it gets.

When we put a brother in the position of the protector and sisters in the place of the protected, we essentially hand over the power to control and dictate the lives of these women to the men in their lives. The patriarchal idea of the weak women who need to be protected exists only to allow men the freedom to control their lives, unquestioned, infringing on their personal freedoms, claiming it is for their greater good.

Disallowing women the control of their own being marks the very foundation of patriarchy, and taking away their agency is what allows their continued oppression. The protector is always above the protected. The protected is ‘incapable’, so the protector has ultimate power and the reigns of the lives of the protected. This continues to be true for numerous women even today, with the freedom to control their own lives, being handed over to the men around them, be it their brothers, fathers, husbands, or sons, the extent of this control is based on their discretion.

We are a culture that is unfair to its women. Most of our culture is shaped by patriarchal and misogynistic ideas that force women to exist on the sidelines of public life because our culture prioritises men and the space they should be allowed. A society like this cannot move forward unless we stop romanticising our culture and realise that not all of it comes from a place where we can afford to protect in today’s day and age.

Incorporating change doesn’t rob our culture of its essence, it only allows everyone to share this culture and cherish it, and not be the victims of it.

Although today raksha bandhan holds a new meaning for many siblings – a day to celebrate, cherish, and commemorate their love and respect for each other across gender lines, without any patriarchal notions. Just a celebration of love, filled with joy, admiration, and respect, the result of affection, not dated, regressive ideas. Raksha bandhan in this form can be a cherished tradition that is a celebration of love among siblings, but in the form it has historically existed, it is patriarchal, sexist, and toxic, and it is time we do away with the underlying idea of men protecting women that formed its basis.

Also read: How I Celebrate A Feminist Rakhi

AIB was right in pointing this out and we should begin to see the glaring flaws in our culture. Incorporating change doesn’t rob our culture of its essence, it only allows everyone to share this culture and cherish it, and not be the victims of it. If our beliefs, traditions, and cultures can be more feminist, it is only a win for all of us, despite our genders, because a more feminist culture only means a culture that incorporates everyone in it and affords everyone the chance to relish and celebrate it.

Akshita Prasad is a 21-year-old who intends to pursue a career in criminal law. She is currently pursuing an undergraduate degree in Social Sciences. She has been identifying as a feminist since the age of thirteen and has been writing about it since; she also writes about law, politics, pop culture, and the LGBTQIA+ community. If not writing or reading, she’s scouring Netflix for a new TV show to watch or is on her millionth re-run.