Annapurna Devi, who chose anonymity over fame throughout her life, left an indelible impact in the firmament of Indian classical music.
By Ruchira Ghosh Oct 22, 2018 5 min read

Full many a flower is born to blush unseen
Waste its sweetness in the desert air….

These oft quoted lines from Grey’s Elegy written in a country churchyard aptly describe the life and times of the noted Hindustani Classical musician Annapurna Devi who chose anonymity as against fame and refused to showcase her stupendous talent to the rest of the world. Indeed very few music lovers – except the most discerning ones of course – may have even heard of her. Annapurna Devi left an indelible impact in the firmament of Indian classical music.

In 1926 she was born as Roshanara, in the princely state of Maihar (now in MadhyaPradesh). Her family traces its origin to Shibpur now located in Bangladesh. Music flowed in her veins, for her father was none other than the legendary maestro Ustad Allauddin Khan, a musician in the Royal court of Maihar and founder of the Senia Maihar Gharana. She had two sisters and her only brother was the globally renowned sarod maestro Ali Akbar Khan. Having been born in an ambience surcharged with music, she took to music just as a duck takes to water.

Annapurna was the leading figure behind the establishment and successful functioning of the Acharya Alauddin Music Circle, Mumbai.

By a quirk of fate she was the only one of Allauddin Khan’s three daughters who took after their father’s love for music. The oldest girl whom Khan sahib had trained, ran into serious trouble after her marriage into an orthodox Muslim family. Her mother law smashed her tampura in a fit of rage. A heart-broken Khan sahib determined not to coach his daughters. The second one succumbed to illness at an early age.

There is an interesting anecdote described in one of her biographies about how he changed his mind. One day while returning home, he had found Ali Akbar practising his sarod and little Roshanara pointing out where he was going wrong, even guiding him just the way their father would. It took a moment for Khan sahib to recognise the child’s latent potential and he seriously embarked upon her training. Initially she was introduced to the sitar. Having mastered it to perfection she eventually migrated to surbahar, an instrument resembling the sitar as well as the esraj. She also learnt vocal music from her father.

For the rest of her life, Annapurna Devi devoted herself entirely to training and grooming a select coterie of students all of whom went onto become renowned instrumentalists, later on. The list includes her nephew Ashish Khan (Ali Akbar’s son) a sarod maestro in his own right, sitarist Nikhil Banerjee, flautist Pt Hari Prasad Chaurasia among many more. Her disciples have diligently carried on the legacies of their mentor and indirectly that of her Baba Ustad Alauddin Khan’s music, through their presentations. 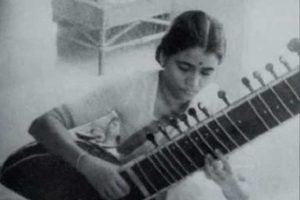 Annapurna was the leading figure behind the establishment and successful functioning of the Acharya Alauddin Music Circle, Mumbai. Dedicated to the memory of Khan sahib the organisation promotes diverse aspects of Indian classical music. She shared a strong bond with her pupils who hailed her ‘Guru Maa’. Though she was not a full-time professional musician yet she was held in very high esteem in the corridors of Hindustani classical music. She had to her credit a rich repertoire of pure classical music, rendered in the traditional Dhrupadi style, which endeared her to connoisseurs and discerning audience. For most of her life she maintained a low profile, scrupulously avoiding media coverage (except on rare occasions) and public glare. Her privacy was ferociously guarded by even her students.

When Anupama was young, the budding sitarist Ravi Shankar enrolled as her father’s student. While they learnt from the same guru, love blossomed between them. In 1941, aged barely 15, she became the wife of the dapper, youthful 21 year old sitarist. Post marriage she embraced Hinduism, adopting the name Annapurna (Mother Goddess). Their only child Shubhendra Shankar was born in 1942. This was possibly the only bright spot in the couple’s conjugal life. As is well known, owing to Shankar’s domineering persona, gigantic ego, coupled with his flirtatious tendencies, the marriage soon ran into rough weather.

Though the music genius had chosen the life of a recluse her talent was duly and suitably recognised during her lifetime.

We also glean from her biographies that Shankar disapproved of her public performances. Bowing to his wishes, and in a bid to maintain the fabric of domestic peace, Annapurna quit performing. It is commonly believed that had she continued she would definitely surpassed her spouse to earn global fame. This fact is further strengthened by author Sunil Shastri who wrote in her biography Suropanishad that she was an unobtrusive self-effacing individual for whom music was sadhana (passionate devotion) – she never hankered for fame and glory. Nevertheless, their stormy marriage lasted two decades, following which they went their separate ways. Much later in 1982, she married Rooshikumar Pandya, her disciple and a management consultant by profession. They led a smooth life till Pandya’s demise in 2013.

Annapurna Devi spent the major part of her life in Mumbai where she had relocated shortly after her first marriage. She lived till her demise. In her personal she was a lonely soul, as her son Shubho, during his early youth had moved to the United States to join his illustrious father and chose to settle down there. Shubhendra had been trained in sitar playing by his mother. However after he migrated, it eventually came to a naught. Thereafter the mother and son met occasionally and that too after long intervals. So it went on till Shubhendra passed away in 1992, leaving her heartbroken.

Annapurna Devi never recorded any music albums. Nevertheless some of her renditions notably Raga Kaushi Kanara, Raga Manj Khamaj, and Raga Yaman in a duet recital with Pandit Ravi Shankar, had been secretly taped, smuggled out and circulated privately by close friends, associates and fans. Though the music genius had chosen the life of a recluse her talent was duly and suitably recognised during her lifetime. She was awarded the Padma Bhushan in 1977, the Sangeet Natak Akademi award in 1991. In 1999 the Vishwa Bharati University, Shantiniketan, conferred on her the Deshikottama, an honorary doctorate degree.

She spent the last years of her life in her in an ostentatious apartment in south Mumbai. She dedicated each day to puja, riyaz, and conducting classes, and occasionally meeting visitors. She suffered from age related ailments over the past few years. Earlier this year she had turned 92. In the early hours of 13th October this year, Annapurna Devi breathed her last in Breach Candy Hospital, Mumbai.