Why Bengaluru Comedy Festival’s All-Female Line Up Was Important

The ideal, of course, would be if gender were not a consideration at all while describing shows. Until then, small victories like Bengaluru Comedy Festival's All-Female Line Up need to be celebrated.
By Guest Writer Dec 5, 2018 7 min read

I have been a regular attendee of the Bengaluru Comedy Festival (BCF) for the past two years. It was instrumental in helping me look at comedy up close, interact with the comedians, and simply get a glimpse into how it all works. Starting off in the first year in 2015 as just a two-day affair, it is now happening full-blown for ten whole days. It is one of the few times we get to see comedians come together to perform on stage in such a large number, and so, it has been on my to-do list every year.

The Evolution Of BCF Into A More Female Comic-Friendly Space

This year I only attended the all-female line up at the festival. The Good Line-up was advertised as, “A hilarious power packed line-up of comedians lighting the stage up. Oh and, they also happen to be incredible women making a mark in the bizz.” Maybe I am reading into more than there is in this, maybe I am not, but the first thing I liked about it was that it neither highlighted, nor downplayed the presence of women in the show.

I say this also because BCF has had panel discussions on ‘Women in Comedy’ in 2016 and 2017 (they did away with them altogether this year). This was patronising at best considering how in other panels (on comedy production or writing) constituted, there were few women, or none at all. Thus, giving the impression that the inclusion of women can only happen in the event of needing a ‘feminist’ or ‘woman’s’ perspective. This detail has been pointed out about the comedy industry earlier too.

So, this year the fact that the ‘femaleness’ of the line-up wasn’t used as a plug, was refreshing.

The first time this happened in 2016, however, the moderator of the panel, Radhika Vaz, called them out. “I was happy they were going to have a panel on the women in comedy. But then I look at the other panels, not one single woman on it!” Vaz also added that she was able to point out the casual sexism evident in the exclusion and also make sure it is rectified  was because the organisers were her friends and that space was accessible – but that is not always the case for everybody. In 2017, apart from the panel on Women in Comedy, all the others also had some women on them.

So, this year the fact that the ‘femaleness’ of the line-up wasn’t used as a plug, was refreshing. The ideal, of course, would be if gender were not a consideration at all while describing shows (we don’t see descriptions like “get ready to watch these incredible men tickle your funny bone,” for instance. It is always implied). Until then, small victories need to be celebrated.

It was for these reasons that I was really looking forward to listening to what these women had to say. Not that I hadn’t seen them tackle sexism and street harassment on stage before. It is pervasive in most women’s sets because it is so pervasive in our lives. But there were a few new jokes in their regular routines that I noticed specifically related to the current context.

Prakasam, the winner of TLC’s Queens of Comedy last year, set the tone for the show by talking about the pervasiveness of male exhibitionism and not-so-subtle references to the #MeToo movement. Aishwarya Mohanraj, of Comicstaan fame, in her popular deadpan style, talked about the possibility of rape becoming part of PSAs in the media.

So why is it okay for women to do ‘rape jokes’ and not the men? Because there is a difference between joking about rape culture (which critiques the patriarchal system that encourages it) and actual jokes about rape (that mock the seriousness of the trauma faced by someone who experiences it). Female comedians have been pigeonholed for doing just this in their routines (watch videos of any of these women available on YouTube, Netflix or Amazon Prime).

Also read: Your Rape Joke is Not Funny, Period.

What was different about their critiques of rape culture this time around was that it wasn’t simply an account of what they experienced but of how it can be countered; how they countered it. Jeeya Sethi, Aishwarya Mohanraj, and Nivedita Prakasam represented for me the potential of stand-up comedy of being a platform for not just talking about harassment but also becoming a space of solidarity as women share, listen to, and laugh at each other’s stories. They subverted the dominant narrative within comedy that women are said to indulge in. In fact, two other women who accompanied me to the show spoke about how they should probably use the strategy that Prakasam details in order to deal with ‘public wankers’.

we don’t see descriptions like “get ready to watch these incredible men tickle your funny bone,” for instance. It is always implied

Apart from the sharp critiques of rape culture and how to deal with unwanted d*** pics, other observational content included dating trouble, some dark humour about poverty in India and something we don’t hear about in the Indian context by comedians: caste. 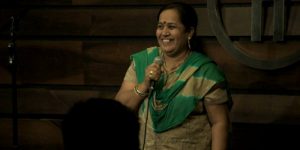 I want to spend some time here talking about Deepika Mhatre. Barring Sanjay Rajoura, no one else talks about caste in comedy prominently in India. Mhatre brings in a unique, subversive perspective to the table. In fact, many people in the audience, including me, had mainly come to see her, as we found out during Shetty’s crowd work.

Pavitra Shetty refreshingly introduced her as someone who “loves to take selfies with her” or as the “best roommate ever”. As a comic, Deepika Mhatre is average, at best. But considering how she has only been performing regularly for the past two years, that is to be expected. She was telling stories more than making witty jokes. Her delivery style is more narrative rather than the set-up punchline routine we are used to.

Part of the reason for the delayed or lack of laughter, I feel, is also because for some of us, the things she said hit too close to home as upper-class, upper-caste women who hire help at home. She points out through common stories the subtle (even explicit) ways in which domestic workers are discriminated against by their female employers. She speaks, among other things, of the experience of using separate toilets as maids and the practice of employers giving their maids stale food, all things that are commonplace for us  –  as (potential) employers  –  so the joke’s on us. The laughter that did result from it was one of sheepishness or discomfort rather than genuine mirth; what Michael Billig beautifully calls ‘unlaughter.’

I found her set subversive also because she represented the crack in the facade of the comedy industry as the most ‘woke’ of all. In one of her jokes, she talks about the hypocrisy with which we view dignity of labour: the one that dictates we treat airhostesses with more respect than domestic help.

She even takes a dig at the journalists who use her profession as a convenient plug for most of their stories. She exposes the upper-class/caste dominance even within women’s comedic narratives which has not been questioned so far. Mhatre will take some time to grow on us, given how entrenched in casteism we still are as a society. It remains to be seen what implications this has for our comedy industry.

The Significance Of Live Stand-Up

Watching the women in the immediate aftermath of #MeToo made me realise why it is important to watch live stand-up comedy. The immediacy fraught in the form makes it such that comedians have to be politically and socially aware in order to stay relevant. Comedy audiences in India are still prominently those that watch online videos exclusively. This makes it very convenient therefore for people to ask them to ‘respond’ to whether “sexism exists” in comedy based on one viral video (in which they would have already responded to the ‘burning’ question). Perhaps the best way to ‘find out’ what their opinions and experiences about sexual harassment are is to listen to those that include issues of sexual harassment in their live routines. For this we need to get out of the comfort of our homes, the safety and anonymity of the internet.

In addition, sometimes as audiences we also need to be able to read between the lines, read the silences. Not everyone may be comfortable talking about sexuality and gender precisely because they don’t want to be pigeonholed, or may simply not be good at it. But the irony is that we end up stereotyping and criticising them for doing both.

there is a difference between joking about rape culture and jokes about rape.

Most of the women who performed at the show are virtually unknown to the public because they are not visible online. However, most of these comics have been performing comedy for quite some time, even before comedy reality shows became a thing. But because we haven’t seen them online, we believe they are ‘new’.

On the contrary, they have a very strong offline presence. Punya Arora is now touring with her solo stand-up special (“Meri Maa Ki”) across the country despite not having put out content online. Some of the others such as Jeeya Sethi and Sejal Bhat are part of prominent comedy production houses that organise open mics for comedians in their cities, especially the women.

A New Phase For Comedy In India?

That #MeToo happened to the industry now, in its fledgling years, is a good thing. Hopefully, it will stop being as exclusive and we find more voices like Mhatre’s in the coming years.

Also read: The Business Of Humour Is A ‘Man’s Job’ – But They Aren’t Even Funny?

Hopefully there will be a more diverse audience as well and not just with respect to social markers of identification but gendered and sexuality related as well: men, women, transpeople, queer folk, the non-conforming  gender –  the whole spectrum of colours and not just the rainbow. But for that to happen, we as audiences need to become more self-reflexive as well and demand more from our comedians.

Madhavi Shivaprasad is an academic based in Bangalore who likes to write about anything that is ‘current’. Right now her obsession lies in humour.