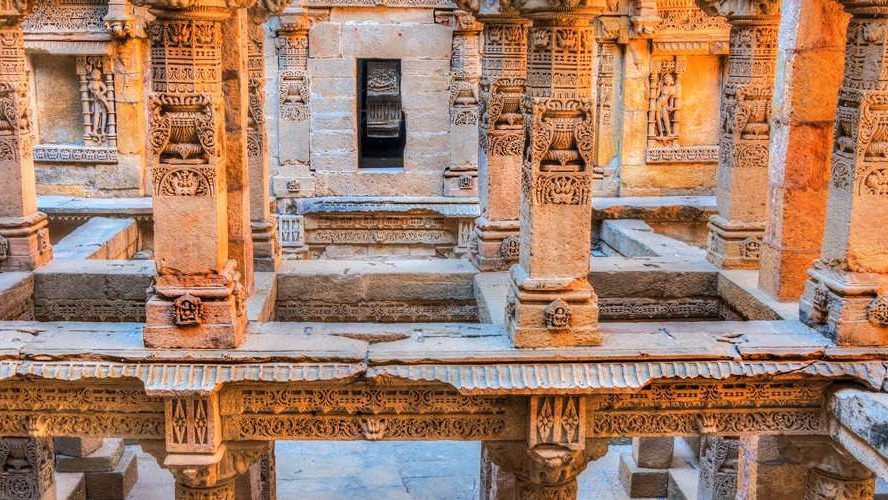 Subterranean water structures like stepwells (vav,Baoli/Baori), and stepped tanks (kund) dotted the dry and arid regions of Western India, especially Gujarat and Rajasthan, and formed the major source of groundwater for centuries. The former is composed of a set of linear steps leading down to the well, and the latter is a tank with steps descending from almost all sides. Collectively, they constitute an important typology of architectural marvels.

The most primary form appeared in the 3rd century CE and evolved to elaborate monuments by the end of the 18-19th century CE. The water from these structures was used not only for agriculture, but also drinking, bathing, washing etc. Due to their indispensable disposition, these water-structure found great patronage in the rulers and elite classes, whether Hindu or Muslim.

Interestingly a fourth of the stepwells are believed to have been commissioned by women, who undoubtedly, have a close association with water and the activities associated with it. As the form of the wells evolved, so did the function. The most advanced stepwells were elaborate canvases for artisans, with ornate sculptures and doubled up, as shrines for multiple rituals and religious activities. They became retreat spaces for travellers due to the inherent spatial quality within the well, which housed shaded pavilion structures; and were therefore built along important trade routes and settlements. Thus, in addition to the functional aspect, vavs and kunds form important spaces of cultural amalgamation, and public life, open to human and beast, all classes, all genders and all religions, except for the low-caste Hindus (who paradoxically were the ones who built them).

Art and Sculpture of Stepwells

Three of the most important (and well maintained) stepwells: Rani ki vav in Patan, Rudabai stepwell in Adalaj near Ahmedabad and Bai Harir vav in Asarva, Ahmedabad were all commissioned by women; Queen Udayamati, Queen Rudadevi and Bai Harir, the superintendent of the royal harem of the household of Mahmud Begada, respectively. While the former two are built under Hindu patronage, the latter is under Muslim patronage, as is evident from the sculptures within the stepped corridor.

It is thus evident, that although designed as gender neutral spaces, the symbolism associated with the spaces revolve around feminine entities like domesticity, earth, and fertility.

The wells accommodated a backdrop for worship and religious activities. However, it is evident through the sculptures in the Hindu stepwells that the space was dedicated to fertility goddesses since very few instances have sculptures of male gods. They also included friezes composed of deities, humans and animals, depicting domestic life. On the other hand, since Islam prohibited depiction of creatures of any kind, the sculptures within Islamic stepwells were that of trees and plants, associated with the Earth. It is thus evident, that although designed as gender neutral spaces, the symbolism associated with the spaces revolve around feminine entities like domesticity, earth, and fertility.

Women as Custodians of Rituals in Religion

Religion, especially of the non-western and non-Christian type, continues to dictate the social and cultural practices of men and women. In the Indian context, this is even more evident as one can see that religion and socio-political institutions are intrinsically linked. Since the values, beliefs and customs are facilitated by religion, so are spaces associated with it. While participation at the community level is available for both men and women, the latter, in their role as custodians of rituals and religious activities have a deeper association with spaces of worship, especially informal shrines and neighbourhood temples, some of which are dedicated only to women. These thus, take on the role of significant spaces for women and contribute in the development of self-identity and social and familial roles.

The ritual, social and communal activities associated with these spaces also aid in shaping women’s collective identity, as part of the women’s community. In their capacity as curators of rituals and religious ceremonies, these communities of women also effectuate exchange of ideas and traditions, thus turning these structures into spaces of knowledge generation.

Additionally, collectively, women also participate in gatherings to sing bhajans and narrate stories form epics, as religious activities. Inadvertently, these gatherings extend into sessions where women get a chance to talk about their problems, and form a support group. The politics of space (or the physical environment) and religion are therefore innately linked. It creates opportunities for the transfer of knowledge, seen more strongly in case of women; both at an individual as well as community level, outside of the immediate kin.

Even Muslim women, who although excluded from institutions like mosques and bazaars in many societies, found their place in the public sphere through their participation in rituals and activities in tombs and shrines of local saints.

The ritual, social and communal activities associated with these spaces also aid in shaping women’s collective identity, as part of the women’s community.

In case of shrines like stepwells, these social interactions happen on a daily basis, because in addition to the religious aspect, stepwells are primarily a source of water, and since gendered segregation of work has ensured collecting water, washing clothes, bathing children etc is women’s work, it gave them reprieve from their domestic lives for a few hours in a day. Furthermore, due to their inclusive disposition (unlike temples), these spaces were more pluralistic, and accommodated women from different religions, creating opportunities for strong bonds and solidarity among women from different backgrounds.

Water as a Feminine Space

Many legends have alluded to water being a feminine space, one which allows the suspension of social norms and patriarchal systems, albeit temporarily. This transient deferral, leading to freedom, to legitimate social interactions, and to respite, has created spaces of female ascendency; so much so that subversions are reversed if intruded by the male gaze, as depicted in multiple instances of art and poetry. Spatially, water has a palliative and contemplative quality, also associated with the feminine.

Religion and Exclusion in the Current Scenario

Non-institutional religious spaces in India and other non-western countries, are therefore an important avenue of not only deliverance, but also total abandon, from the shackles of patriarchy. But is the same true for temples, which are institutional places of religion?

Pilgrimages are sometimes the only form of travel for many families in India. Isn’t restriction of entry into temples taking away opportunities for release for women? Hundreds of women partake in the in the Sabarimala pilgrimage for instance, but are restricted entry beyond the Pamba river. This time at the water, creates opportunities of interactions similar to those seen in water structures. This re-affirms the analogy of water as a shrine; one that is inclusive and contemplative, albeit by chance, and not design and leads to social interactions. However, it doesn’t take away from the fact that the institutional association is facilitating exclusion for women, from a space that has immense potential to create liberating spaces.

Also read: Institutional Oppression To Spiritual Awakening: ‘Water’ And The Journey Of Its Women

Evidently, religion and its associated spaces play an important role in the daily life, social structures and hierarchies of society. Isn’t it about time therefore, that institutionalised spaces of religion also started recognising the potential they have to create opportunities of unrestrained liberation for women?