India’s leading female wrestler Vinesh Phogat claimed her third successive gold medal at the Poland Wrestling Tournament in the 53kg category. The 24-year-old grappler commanded victory over her opponent Zosana Roksana by a 3-2 margin. She had earlier defeated Sweden’s Olympic bronze medalist Sofia Mattson in the quarter-finals on her way to the final.

This was Phogat’s third gold medal in the last two months. She had clinched two gold medals at the Grand Prix of Spain and at the Yasur Dogu International, held in Istanbul, Turkey last month.

Right after her glorious victory, she tweeted,”The biggest positives from wrestling against strong opponents are it forces me out of my comfort zone, makes me push my limits, and teaches important lessons! Happy with my performance at the #PolandOpen. Excited by this start as a 53 kg wrestler, now onwards and upwards.”

After her win, Phogat is now looking forward to representing India at World Championships in Nursultan in Kazakhstan in September 2019.

The 24-year-old grappler commanded victory over her opponent Zosana Roksana by a 3-2 margin. She had earlier defeated Sweden’s Olympic bronze medalist Sofia Mattson in the quarter-finals on her way to the final.

Earlier this year, Vinesh Phogat secured a bronze medal and made her way to the podium by beating Qianyu Pang of China with 8-1 at the Asian Wrestling Championships which was held in X’ian, China.

In 2016, she became the recipient of the prestigious Arjuna Award for her outstanding journey as a sportswoman.

Vinesh Phogat was one of the top medal contenders for the Rio Olympic Games in 2016 but a serious knee injury during her quarterfinal match led to her being ruled out of the tournament. Her knee injury demoralised the young sportswoman as she believed it to be the end of her career. It halted her wrestling career for almost two years.

The horrible injury made her more headstrong than ever as she proved herself a prolific sportswoman by bagging a gold medal in the 2018 Asian Games and becoming the first Indian woman wrestler to do so. Her courageous comeback journey was also recognised internationally as she became the first Indian to be nominated for the Laureus World Comeback of the Year.

Also read: Watch: Women In Sports And The Fight for Equality

Last Year, when she married her long-time friend and lover Somvir Rathee, she was criticised because of the whole notion that marital status hampers the career of a sportswoman. Phogat is hell-bent in ending this stereotype and is inspiring young women to stop seeing marriage as a barrier in achieving their goals.

Vinesh Phogat along with her five sisters: Geeta, Babita, Ritu, Priyanka and Sangeeta, all of whom are wrestlers, broke the highly sexist norms within Indian society by pursuing a male-dominated contact sport such as wrestling. In 2012, Geeta Phogat became the first Indian woman wrestler to qualify for the Olympics. Her other sisters continue to win numerous accolades year after year.

In 2018, she was nominated for the country’s fourth highest civilian award—Padma Shri Award. In February 2019, she created history by becoming the first Indian athlete to be nominated for the Laureus World Sports Award.

In 2016, a biographical drama film Dangal based on the journey and success of phogat sisters’ was released. Starring the Bollywood actor, Aamir Khan in the lead role as Mahavir Singh Phogat, the movie was a box office hit and was critically acclaimed. 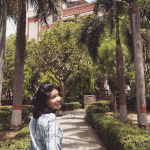 An English literature graduate who likes to learn different art forms and wishes to create a social impact.

Singing Mira: The Erasure Of Caste From Mira’s Poetry

How Is Kerala’s Kudumbashree Model Helping Combat The Pandemic?

‘She Was Way Ahead Of Her Time’: In Conversation With Kajri Akhtar, Director of ‘Kamla Bhasin — A Woman, By Choice’