Over the past few decades, a new field of inquiry has been drawing in a lot of scholars, activists and social reformers, particularly women, in the task of re-analysing the patriarchal nature of Islam and bringing forth a feminist reformation. The existing prejudiced notions of Islam as a gender biased religion were to be subverted under this exploration. The Quran came as a sacred text, a word of God which introduced us to the message of universal equality among all humans irrespective of the gender, class or race. However, once tampered with individual interpretations, this Holy text lost its actual meaning over time. The aforementioned are trying to restore these lost values and meaning of fundamental equality which has been subverted in the name of religion itself. It therefore brings forth how the age-old interpretations of the Holy text are only to satisfy male interests and are a result of a patriarchal reading of the text.

Broadly, patriarchy means the rule of the father as the head of the family and men as the heads of the society. This gives man a superior position over women both at home extending to a more societal level. They administer their authority over their wives and children at home and over women outside in general. The whole concept of female degeneration therefore is like a never ending cycle where she is initially deemed submissive to her father and later to her husband when married.

Alongside, the role of a woman is only limited to the tasks of daily household chores and to maintain the honour and dignity of the family, but our foul society implies no such rules for men. Honour is something only women are to preserve whereas men may stray away without compromising their honour. These so called male tyrants therefore leave no stones unturned to enforce their complete rule over women. The biological sex difference further serves as a strong impetus for the politics of sexual differentiation. These factors propel one to rethink and reread whether or not the Quran is a patriarchal scripture in reality.

The Quran came as a sacred text, a word of God which introduced us to the message of universal equality among all humans irrespective of the gender, class or race. However, once tampered with individual interpretations, this Holy text lost its actual meaning over time.

Besides, the crux of the matter is the oxymoronic character of the two terms ‘Islam’ and ‘feminism’. Often seen in contradiction to one another this brings to light the abysmal nature of such a prejudicial outlook. Nonetheless, it should not escape our notice that the Quran by no means is a feminist text, it does however convey humanitarianism with an equal stance for women as that of men. It right off the bat restricted the corruption of daughters and forbids any such distinction between a daughter and a son. Mothers are given utmost respect in the religion and the Quran commands high honour in her service. Ever since the pre-historic times, women have been of secondary importance and Quran dismisses this position. Islam in fact, was the first ever religion that tried to elevate the status of women in earlier Islamic societies.

As per several Islamic re-readings, the Quran has imposed the same rules for both men and women. Men and women both are expected to follow the religiously prescribed norms of morality and righteousness. Any means of non-adherence to these Quranic regulations and digressing from the same only torments women, toying with the very fabric of religion itself. The contemporary conception of sharia has been derived from the theory of Islamic jurisprudence i.e. fiqh which was originally formulated keeping in mind the patriarchal thinking and attitude of the earlier times. This very patriarchal bias has helped develop and conceptualize the sharia laws accorded today. Additionally, the hadith, the reported practices and deeds of the Prophet Mohammad have also been a subject of debate. The authenticity of these hadiths is constantly under question, moreover, many of these often convey a negative attitude and consequence towards women. Such obliviousness is not derived directly from the Holy text but the self-absorbed and male centric agenda.

Mothers are given utmost respect in the religion and the Quran commands high honour in her service. Ever since the pre-historic times, women have been of secondary importance and Quran dismisses this position. Islam in fact, was the first ever religion that tried to elevate the status of women in earlier Islamic societies.

God, created two sexes, both equal in his eyes, thus both are to be granted an equal worldly status. While the earlier times of Prophet Muhammad seem more progressive for women, the later generations stalled on granting a substandard to women, thereby reaffirming male superiority. During the earlier times, one could not possibly see any kind of discrimination between the sexes. The Prophet’s morals and conduct therefore should have a positive impact on everyone. Khadija, the wife of Prophet Muhammad was a businesswoman, strong and assertive, she actively participated in all spheres of life.

In fact, both the genders were granted a fair share of public participation in every sphere of life. The Prophet strongly supported this system. It was a just society, strict in terms of moral behaviour and justice where the same rules and constraints were imposed on both the sexes. He had always been sensitive as well as encouraging to their need and demands. Never did he ever lay a hand on a women or anyone of an inferior status such as a slave. His conduct has set a perfect example of a sincere God-fearing man for the ones around him and the generations to come. He even protested the idea of women being beaten by their husbands or male counterparts and proclaimed whosoever performs such an act is “not among one of us”.

Islam and patriarchy are two very different concepts and the former apparently is in no favour for the latter. The domineering manipulation of Islam with its end goal of a patriarchal or man centric religion succeeded over time, but an in depth study of religion, challenges this notion. Patriarchy however, impeded Islam’s call for gender fairness and equity. The sad reality here is that the first ever religion with a message of sexual uniformity embedded in its sacred scripture, as the word of God is viewed as the most male-centric of all. Muslim men, including the so-called religious leaders and God-men have been serving their own egoistic interests by sustaining this male centric character of the religion.

Currently women across all boundaries and classes are struggling with gender biases in one way or the other. Gender unlike the biological sex is the prejudice our social order creates. Throughout time and culture which has only strengthened. It is high time and one must counter women’s negligence and oppression proposed by both moderate and conservative Islamists who use Muslim or Arab culture as a means for their patriarchal politics and make women’s rights and demands an optional commitment. The situation therefore demands for a more egalitarian reading of the text keeping in mind the rights and interests of both the sexes.

A call to hold this ground for a more honest and fair analysis of the man-handled interpretation of the Quran is right on all counts. Since different readings of the Quran render different meanings and understanding of the text, it becomes significant to see it from a woman’s lens. Women who have been traditionally neglected and left out from a say in the traditional doctrines, should be given their long due worth now.

Ruqayya Bahar is a PhD research scholar in the department of English, Aligarh Muslim University. She is currently and ever working on exposing the patriarchal biases against women. You can follow her on Instagram. 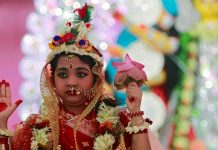 My Non-Binary Partner And I Were Told Our Relationship Would Never...

#MakeMyWorkplaceSafe: Addressing Sexism In The Workplace