The short film ‘Devi’ created ripples across Indian media through its hard-hitting depiction of rape. Its star-studded cast brought the grim reality of rape culture to the screen. However, it got embroiled in a plagiarism row immediately after its release. An independent filmmaker accused the makers of Devi regarding creative theft. Incidentally, the original concept of ‘Devi‘ is from a low-budget student film called ‘Four’. Directed by Abhishek Rai, it was released in 2018 by Andacurry Productions and Marwah Films. According to Rai, Four is the intellectual property of Asian School of Film & Television.

‘Four’ is a heart-wrenching tribute to rape victims. The short film eulogizes four high profile rape cases in the country. Its plot unfolds inside a claustrophobic room where rape victims arrive after death, carrying emotional and physical scars of battling sexual abuse. Through a poignant dialogue between two characters, ‘Four’ highlights the monstrous violence against women in India. The eponymous four in the story refers to the fictional representation of real women, namely, Bhanwari Devi, Nirbhaya and Asifa. According to the makers of ‘Four’, the movie was inspired by the heinous Kathua rape case.

In case of ‘Devi’ too, the plot unfolds inside a room full of rape victims where women from all strata of society are residing in their afterlife. With increasing number of rapes in the country, the members keep increasing in the room. The women’s arguments uncover a diseased society and inept judiciary. As they recollect heinous crimes through their dialogues, the audience is made aware of the sheer violence and trauma that rape victims undergo. Devi showcased a narrative where women come together through shared misery and develop a unique sisterhood.

A Case of Plagiarism

Watching both the films it is undeniable that the climactic scene in both the films bear uncanny similarity. It is hard to dismiss the similarities as mere coincidence. The creative concept on which ‘Devi’ is based, clearly borrows from ‘Four’. However, turning a blind eye to the ‘Devi‘ plagiarism row and other such incidents breaks the spirit of independent artists. They are denied much deserved credit, while others monetize their work.

Abhishek Rai took to social media and wrote, “Hi everyone, it is my humble request to all of the fellow students and members of Asian School of Media studies to please come out and share this tragic incident to the world as the makers have been seeing this but I’m still not getting a word from them. I have been proud of this institution and whatever I’ve done for it. It’s your film too. We have been putting our hearts out in the making of these films at this age, it is our hard work and watching someone just taking it and appreciated to be as an original is just makes me heartbroken.”

According to Rai, the makers of Devi did not reach out to him at all. In an interview with Film Companion, producer Niranjan Iyengar’s casual response to the allegations was, “Both the films are in public domain, people should watch and decide for themselves. It is not for me to comment on the similarities and dissimilarities”.

In case of ‘Devi’, the cast was led by Kajol. It also stared well-known actresses like Neha Dhupia, Shruti Haasan, and others. As a result, the film won wide-spread popularity and critical acclaim. On the other hand, ‘Four’ had a cast of unknown actors. It did not have the advantage of a strong PR and marketing team to popularize it on mainstream media.

The ‘Devi‘ plagiarism row brought a series of other relevant issues to the forefront. It illustrates the difference between performing and becoming in terms of celebrity activism. A story involving the identity of a Muslim girl is relegated to the sidelines and replaced by stereotypical characterization of various Indian women. Is this an indication of token activism that mainstream movie-makers are indulging in?  If not, then why are the identities based on race, caste and religion of rape victims relegated to mere caricatures? Therefore, it is evident that the political nuances and complexities of the real stories of the women are taken away in the name of palatable consumption for the market.

Also read: Celebrity Feminism : In Between Performing and Becoming

The Devi plagiarism row is an indication that the rich and powerful in the industry can get away with such legal and ethical misdemeanors. As informed audiences and intersectional feminists, it is imperative that we recognize and understand the story-tellers alongside the stories. What is being said is as important as who is saying it? 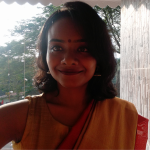 Sudeshna is an English Literature Postgraduate from Lady Shri Ram College, currently enrolled at the EditPub course in Jadavpur University. Working as a freelance writer, editor and digital marketer; she is a creative bohemian with a penchant for adventure and art.