“I knew, as I clutched my firstborn child, that I was losing my second.”~Meghan Markle (New York Times)

Meghan Markle is not new in the line of breaking traditions and shattering stereotypes. From becoming a royal to taking “a leap of faith” in denouncing it, Markle is no stranger to controversies. Markle’s latest revelation about her miscarriage, situated in the polarising background of rising hate and unrelenting coronavirus, opens up a long tradition of mystical silence surrounding miscarriages.

Miscarriage is a truth as common as pregnancy but is never spoken about. It is borne in silent grief as it is often seen as a woman’s reproductive “failure” labelling them as “ barren” and “ infertile”. Without any support system, the loss compounded by the secrecy creates a chasm and a void in the lives of many women who are forced to deal with it by hurriedly preparing for another pregnancy.

Breaking the Veil of Silence

According to WHO, 15 to 25 percent of pregnancies end in miscarriage and most miscarriages occur in the first trimester of the pregnancy which is also the time when pregnancies are kept complete secret and are hidden from the public gaze. And hence, the loss also remains shrouded in painfully awkward silence. In most cultures, women are not allowed to announce their pregnancy( good news) untill the successful completion of 12 weeks with the sole purpose of keeping the potential miscarriage a secret, often putting vulnerable women at risk during the time when care is most required.

Meghan Markle’s subtle details about the pain and the need to talk about it, is urgent in breaking the taboo around miscarriage much like mensturation. Initiating a conversation surrounding miscarrige will not only build a shared solidarity of  what she rightly calls a “staggering commonality” and much needed emotional support, but also cease to freeze the female body as means to an end. This is because the physical changes in a pregnant body resulting in a miscarriage takes a mental toll and needs time for healing. And there must not be an expiry on that time.

Grief is complex and can take various forms. Many women struggle to accept their altered and often scarred bodies which continue to have the symptoms of pregnancy without any palpable outcome. Many feel alienated and ashamed of their bodies, manifesting their anxiety and grief violently on their bodies with the feeling of anger, disgust and even intolerable hate. A miscarriage is not a uniform feeling of loss, the intensity of pain and severity of loss also depends on the stages of pregnancy at which the miscarriage take place. In the advanced stage, the body gets into the postpartum phase without a baby, making it physically impractical for the woman to cope with the loss that the body refuses to register.

According to 2015 national survey published in the Journal of Obstetrics & Gynecology, 47 percent of people who had miscarriage feel guilty and 42 percent blame themselves for it. 76 percent of people believed that pregnancies are caused by stress and 64 per cent believe it’s caused by lifting a heavy object. With such widespread misconceptions projecting the blame on  women, miscarriage transforms the idyllic maternal energies into self doubt, resentment and failure.

ACOG (American Congress of Obstetricians and Gynecologists) explains that most miscarriages are caused by chromosomal abnormalities, clearly exonerating women yet simple words like ‘it is not your fault’ fails to resonate through the cultural conventions and religious practices around miscarriage. If pregnancy is sacred, miscarriage becomes a sacrilege.

Megan Markle laments, “Losing a child means carrying an almost unbearable grief, experienced by many but talked about by few”(emphasis mine). Communicating grief makes it a collective experience thereby breaking the stigma of shame, self blame, guilt and the “cycle of solitary mourning”. Patriarchy is brutal to ‘unproductive’ women and would like them to be an aberration, terming them as witches or evil spirits as they fail to perpetuate patriarchy through reproduction.

Thus, women have to come out of the cultural and religious narratives built around miscarrige to talk candidly about their trauma, pain, body and loss. As Meghan puts it “sitting in a hospital bed, watching my husband’s heart break as he tried to hold the shattered pieces of mine, I realised that the only way to begin to heal is to first ask, ‘Are you OK?”.

Miscarriage is a Misnomer

The term miscarriage itself need a revision, implicit in its understanding is blame on the woman who missed (failed), as if out of negligence or ignorance to carry the child. It implies culpability, incompetence, rendering her useless and blameworthy. Not just a misnomer, miscarriage also visually concretises women as wombs, a defunct at that too. Female reproductive anatomy is historically imagined and culturally understood as a ‘carriage’ or a vessel which is destined to be filled in order to justify the purpose of its creation. Such antiquated mindsets were reinforced in the development of early antenatal care systems in the 20th century.

Ann Oakley, a feminist sociologist known for her exhaustive research in the field of housework, motherhood and childbirth records the growth of clinical antenatal care in the 20th century Britain as analogous with the state taking control over pregnant women in advancing motherhood as a national programme with the introduction of NHS. In The Captured Womb, Oakely painstakingly documents women as passive patients of mechanised reproduction. The Departmental Committee on Maternal Mortality and Morbidity (1930) records “The patient herself is often her worst enemy whether from ignorance or apathy, ill health or prejudice, etc and until she is able and willing to cooperate, doctors and nurses attempts to assist her can never be fully effective.”

The onus of the rising mortality rate was easily put on women and a campaign was launched to ‘educate’ mothers (presumed to be ignorant) through increasing professionalisation of medical care for pregnant women, thereby taking control over their bodies. The natural experience and intuitive knowledge of being pregnant was discarded in championing the obstetrical pursuit in fetal growth with regular monitoring of the pregnant bodies.

Oakely criticises the medical surveillance of pregnant women through technological advancements like ultrasound, artificial labour induction, fetoscopy etc., precipitating a greater institutionalised social control over women. She contends that with the pregnancy coming under jurisdiction of the medical profession, women’s bodies were routinely manipulated as ‘containers’. Self determination and owning up one’s body is imperative in taking control over one’s reproductive rights including right to abortion, terminating pregnancy,contraception and sterilization.

“The wombs of women—whether already pregnant or not—are containers to be captured by the ideologies and practices of those who, to put it simply, do not believe that women are able to take care of themselves.” Oakely’s call for bodily autonomy and integrity can be channeled through networks of solidarity and sorority in what Meghan calls “first steps towards healing.”

Thus, it is remarkable when women with influence like Michele Obama in her memoir, Becoming also discusses her painful miscarriage and struggle with pregnancy and IVF in normalising the conversation around miscarriages. In a rare revelation from a royal, Meghan Markle has set a benchmark to put out her most private moments of grief in public because personal is political and while she may be criticised for it as an ‘attention seeker’, the truth is that miscarriage is a taboo, demoralising and pushing many women into a dark hole.

It’s time we share our stories and talk about losing a baby in closing the circle of grief. The #IHadMiscarriage campaign by Dr Jessica Zucker is one such brave social collective of sharing and re-defining grief and reminding each other that they are not alone in this sorrow. And also recognising that stillbirth is ‘still a birth’. 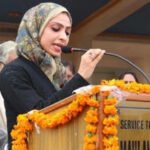 Why Does The BJP Government Fear Akhil Gogoi?