HealthBody Image Free The Nipple: The Feminist, Political Act Of Defiance And Resistance By Women

Free The Nipple: The Feminist, Political Act Of Defiance And Resistance By Women

The general censorship of the woman's nipple is discriminatory on the basis of gender. The nipples and the mammary glands aren't sexual organs, rather they sustain a early human life.
By Pooja Vidrohi Aug 5, 2021 6 min read

In our search to explore the unknown territories of Jawahar Lal Nehru University (JNU) campus, my five other friends and I, discovered an extremely serene and beautiful place amid the forests of JNU. It was one hot day and we were soaked in our sweats but suddenly a cool breeze started blowing. I wanted to feel the wind on my body unrestricted by clothes, wanted to capture this moment for the lifetime to come. We then asked our male friends to leave the space for few minutes and they very politely obliged. The place was isolated and there was no trace of any other human being there. We were feeling extremely blissful but I wanted my body to experience the direct contact with the wind and so did another friend. There was nothing that could stop us in that moment, except the false notion of modesty and our inherent insecurities about our bodies, but at that moment, we girls felt unstoppable. We took our shirts off and let all our fears and insecurities go off with that piece of cloth on our body. We experienced true freedom in that moment.

It’s very important to note that a small idea and a nudge can go a long way in making a real difference and  sometimes art does that job.

So, some time back, while watching the show “The Bold Type”, one particular scene caught my eyes in which one of the lead actresses had finally gathered the courage to accept her body, leaving all her fears behind and embraced it in a very beautiful manner. With her, I realised how I too had felt an emotional release. But she, along with her two friends did a thing that many might be convinced is too radical, they went to a public park and relieved themselves off their tops and bras. I found it brave. Yes, they went topless, which has been since forever, seen to be the privilege of just cis men everywhere. The scene was extremely powerful and liberating. It is legally permissible in a few states in the USA for women to go topless too, just like men.

Also read: The Feminist Politics Around Wearing A Bikini

Watching the trio find freedom in nudity felt so liberating, because every woman I know has expressed her displeasure with the obligation to wear their bras and tops all the time while men weren’t bound by the same rule. This is not to be mistaken as an attempt to construct a narrative that cis women who choose to be covered do not experience freedom. This is, instead, a personal commentary on how freeing the nipples, for a cis woman like me, is an act of liberation and feminist resistance. In a world of extreme inequalities, this is one small but equally important manifestation of discrimination that no one talks about.

The issue isn’t new to me. I remember in my childhood I used to see men, including my brother and father, roaming bare chest within the spaces inside our home and even in the streets, when the weather got too hot to bear. Of course, when it’s summer and you only get electricity for a couple of hours, your clothes begin to drip with your sweat and to relieve yourself from this suffering, you would naturally go for the minimum covering, it was understandable why my brother and father did what they did. But that made me also wonder, why can’t we women do that too? What’s so different about male breasts and female breasts, except that society at large has sexualised the latter to a point that a woman cannot even breastfeed her infant in public without inviting stares?

I know it was quite ambitious for me to think about going topless when women in my region are not even allowed to get rid of their veils. Anyway, the world is far from being an ideal one. It looks at the male and female bodies differently and assumes a lot of control over a woman’s body, starting from reproduction rights to sexuality to mobility. The overt sexualization of every part of a woman’s body, ranging from genitals to breasts to naval to legs and in some cultures, even eyes and hair, has reduced a woman into a purely sexual object. Any exposure of her sexualixed body will attract public outrage and diktats of indecency and obscenity are promptly imposed right after, in addition to slutshaming.

Women’s nude/semi-nude bodies are consumed heavily as erotica and pornography in our society. And the only reason for that is, these representations occur on the demand of male audience for sexual pleasure and how they are represented is heavily controlled by male audience. Thus, until the representation is operative under the male gaze and it suits their agenda, the exposure is fine and even desired but when women choose to expose their bodies at their will, suddenly it becomes the greatest threat to human society. Women’s bodies, when used for purposes where men aren’t the consumers, is seen as an act of indecency which must be punished or disgusted upon.

So, let’s talk in legal terms, do we have any precedent where women are given the same rights to expose their bodies as men? Yes, the world has recently opened its door to women’s right to go topless (in non-sexual manner especially for the purpose of swimming, sunbathing and breast feeding) in some places such as USA, Canada,  Mexico, Australia, Italy, Greece, Spain, Nordic Countries etc. In ancient India, women were allowed to remain bare chested. It was only after the Mughal era and Victorian age that exposure of breasts by women was considered indecent and immoral. The notion of modesty keeps changing with time and we can hope it will change in our present societies as well. To fight this cause, The TopFreedom Movement in 2012 launched #FreetheNipples campaign which remained fairly successful in gathering media attention and opening up a platform to talk about  women’s right to free their breasts. They base their arguments in seeking equal rights for women as their male counterparts. The censorship of female nipples is also discriminatory on the basis of gender. The nipples and the mammary glands aren’t sexual organs, rather they sustain a early human life.

Also read: Rebellious Thighs In Summer Shorts & The Jazz At Our Homes That Never Stops Playing

Raging against the sexualisation of women’s bodies is also a big political statement a woman can make and it could prove revolutionary in the domain of  asserting bodily rights by women. Moreover, our breasts too desire to feel the cold breeze on a rainy day or soaked in sun when lying down on a beach. They dream to feel free and relaxed when a hot day arrives and an upper body cloth feels unbearable. But again, it’s very ambitious of me to think that world will be immediately receptive of this change, when a woman not wearing a bra in itself still attracts a lot of negative  reaction. Even women aren’t comfortable being around with topless women, they are not even comfortable looking at their own naked bodies. All our life, we have been made to pursue the ideal body type and that has created multiple insecurities in us about own bodies. We must look at ourselves and love everything our body possesses. Our first fight is with our own selves. We must win this battle first if we ever dream to achieve other goals.

It is true that there are larger issues that women are facing such as lack of ownership rights, wage gap, harassment at work places, gender-based violence, lack of education, under representation in position of power and so on, yes. But every issue is interconnected in a very complex manner and we need to counter each of them simultaneously. Women should speak out whenever or wherever it is possible. Registering our dissent and opposition to unfair rules and practices is very important to get our rightful place in this society. Ideas are radical till the time they aren’t spoken about and debated publicly, then they become contentious issues and issues could be resolved by further discussion. I would wait for the day when women will be free to make their breasts free without attracting stares from perverted men. We still have a long way to go but we have to start from somewhere and that somewhere lies  within all of us.

Pooja Vidrohi is pursuing her Masters in International Relations from JNU. She identify herself as a Radical Feminist and a Gandhian. She is the first girl from her family to pursue higher education. She wants to dedicate her life to educate women and children. Music, Dance, Cinema and Sports are her other areas of interest. Women of the world, Unite!! She can be found on Facebook. 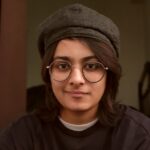 Pooja is a post graduation student at JNU. She identifies as a radical feminist, and works on issues related to gender based violence, domestic abuse, language and rape culture

Paternity Leave And Parenting Stereotypes: Policy Changes Must Be Backed By Change In Attitude

My Struggles To Battle Gender Roles In Indian Administrative Services