CultureCinema Mothers In Malayalam Cinema: From Ideal Care Givers To Individuals With Boundaries

The bulk of Malayalam cinema has represented mothers to be sacrificial care givers. This trend is promisingly being subverted by newer films
By Anagha S Sep 17, 2021 7 min read

Motherhood has been socio-culturally positioned as an experience which is tied together with the purpose of a woman’s life. More than that, a woman after becoming a mother, is expected to be the ‘perfect‘, ‘all enduring epitome‘ of love and care. These stereotypes are further reiterated and normalised by movies making them an ideal standard for how a mother should be.

The pandemic has taken a toll on working mothers because of this stereotypical notion, and it has left them in a pressured environment where they cannot be themselves, address their conflicts or ask for help. Hence, parenting becomes doubly exhausting for mothers due to mounting benchmarks, suppressed emotions and unattended self-care needs.

The role of movies in establishing mothers as ideal, sacrificial individuals with no boundaries or pursuits of their own must be critiqued so as to humanise them and their feelings. Malayalam cinema is now gaining national attention for the quality of content it spearheads, especially after the pandemic triggered OTT boom. But as is the case with most mainstream representations, Malayalam cinema’s portrayals of mothers has been problematic as well.

Though this pattern appears to be slowly changing, the damage that the earlier representations of motherhood have done still looms large. The idea of the mother being a ‘poor village woman‘ who lives with whatever is being thrown at her without complaint or questions is a very common motherhood character trope in Malayalam cinema.

She loves her husband and kids dearly despite the toxicity that they unleash on her. Naran is a 2005 Malayalam movie which stars the superstar Mohanlal in the lead. The film which is set in a village revolves around Velayudhan, a local goon who is also soft at heart. While the plot progresses through his journey comprising of his private struggles, and occasional violence to establish his masculinity, the film subtly injects the idea of a ‘virtuous, all enduring mother‘ through a character named Janaki who was in love with Velayudhan but had to marry someone else.

Throughout the narrative, the plot keeps on reiterating how ‘pure and well-mannered‘ she is. Her husband is a drunkard who subjects her to domestic violence and yet she stays with him loyally, taking the responsibility of raising their daughter on herself. Her conditioned submissiveness and inadvertent helplessness are glorified and romanticised to also stress on the idea that she is a ‘good mother‘ because she endures an abusive marriage for the child.

It can also be seen that most mothers in Malayalam cinema attempt to establish an emotional upper hand over their children. Mothers can be seen playing the maternity card and guilt tripping their children with a list of struggles they have gone through to raise them, when the children try to exercise their agency or make decisions that the mother does not approve of.

Although such scenes are usually highly melodramatic, they indirectly posit all mothers as emotional and above that, present motherly sacrifice as the only reason why children must respect the opinions of their mother and not because of the person she is or because she has other qualities or simply, out of love. In the process, these portrayals also normalise the toxic idea that it is okay for mothers to demand control over children, even after they are full grown adults, solely because they brought them up.

There is no space for individual choice, respect or negotiations within these mother-child relationships. It becomes an equation that thrives on guilt tripping, gaslighting and emotional blackmail.

Another problem with such representations is that instead of interpreting motherhood as one of the many roles in a woman’s life, it becomes her entire life, a singular identity which she must confirm to. The mother figures of the protagonists portrayed in movies like Meesha Madhavan and Runway are typical examples of this kind of juxtaposition of the singular identity of motherhood on women.

In both these movies, one can observe how only one aspect of their lives – that of being a mother – is represented throughout. More than that, the only reason why they are respected and accepted is because of their motherhood and definitely not due to the logic of their opinions, clarity of expressions nor the depth of their lived experiences. When we seek to portray a unilateral dimension of a character, we are cutting off the possibility of any different interpretation of being a mother sans judgment.

While we readily accept mothers who are ‘virtuous’, ‘perfect‘ and repositories of abundant love and care, we are a bit skeptical of accepting mothers like one played by Shobhana in Varane Aavashyamundu or Kalpana in Bangalore Days. These characters differ significantly from the mainstream portrayal of mothers because they assert their individuality beyond their role as mothers.

Shobhana’s character in Varane Aavashyamundu is a huge leap for the representation of mothers Malayalam cinema. She is a divorcee who admits that she had many romantic relationships before she got married. She is independent, financially stable and has her own set of hobbies, ambitions and pursuits in life even as she is extremely invested in her role as a mother. The movie concludes with both the mother and daughter beginning new romantic relationships with men who they choose for themselves.

The movie itself debates the issue of the homogenisation of the life of mothers. It critiques the sidelining of the varied emotional, social and cultural complexities of women who are also mothers to condense their entire existence to motherhood.

Kalpana’s character in Bangalore Days is also a daring mother who surprises the audience by holding on to her desires even when the whole family thinks that she would curl into a bundle when her husband abandons them. The contradictions of a mother who tries to balance her desires with the social expectations of being a mother are represented vividly in the movie with a dash of humour.

The surprise her responses at various instances elicits and the mask that she has to put on to survive in her marriage until she is free to move to Bangalore with her son in turn, expose the tight boundaries within which we coerce women who are mothers to stay.

A more recent example is also that of the mother character in Kumbalangi Nights. She is someone who has left her grown up male children to pursue her own path. When asked to come home and stay with these grown men, she says she has brought them up when they needed her and that now, she wishes to be her own person. Whether we like it or not, mothers are people who have black, white and grey shades to them, and this has remained underrepresented in mainstream cinema.

There have been instances where movies have represented mothers who had their own autonomy and recognition. However, these representations drown down in the sea of ‘perfect‘ mothers who devote their bodies and souls to their children. They are often looked at with judgmental eyes.

One may ask what is the problem if that is what the mother wants. The only answer to that question is no human being must be stereotyped into only having one single identity. It is not fair to look at a person as a single entity with a single assigned role. Especially when it is clear that mothers struggle to meet the expectations of the society to be a ‘good mother‘ who exactly knows where their child’s socks are, ‘understands and endures‘ the tantrums of their angry teenage kids and are the ‘guiding light of the house‘.

It is high time that we stop glorifying the sacrifices of our mothers and expecting them to be perfect. A mother is just like any other human being who has her own feelings, opinions and bad mental health days. Films play a very important role in deconstructing these stereotypical notions. The new progressive story telling wave in the Malayalam films is promising in this aspect and has the potential to be a driver of this much-needed change. 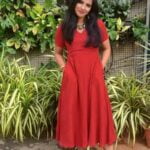 FII’s Feedback Form: We Want To Hear From You!

Why The Death Penalty Just Needs To Go. For Good.