SocietyFamily ‘We Hold On Without Stifling Each Other’: Figuring Motherhood Out With An Eight Year Old

'Instead of stifling one another in love and sacrifice, we are firmly holding on', the author writes on figuring motherhood with her daughter
By Priyanka Chatterjee Sep 22, 2021 6 min read

It took a long time for me to come to my child. In retrospect, I feel this was my revenge against the world for thrusting ‘settle down’ down my throat without allowing any transition time. Married off at 23 when I had just finished my post-graduation, since 23 itself was ‘too old‘ for marriage, and then brought to motherhood at 28, since five years of childless marriage had become the choicest gossip in the family and neighbourhood, I could see myself in situations I hadn’t been prepared for.

I tried at times to make the world realise I am not motherly; more appropriately, that being affectionate, warm or being a woman does not make one a natural mother. It’s a role laden with expectations I cannot fulfill. I met with cold, confused looks. I rejoined my PhD classes which I had enrolled for when I was seven months pregnant, thinking that the academic space which harboured emancipation as its foundational spirit would provide me some relief.

But institutions are structures that are wary of transgression. Hence, while previously as a married woman my endeavor to study further was always considered as whiling away time, now as a mother I was reminded how my hands were too full to do anything worthwhile but mothering. Thus, embarking on a mission to break the mould, I immersed myself in work, became a part-time mother, mostly depending on my own mother to raise my child while I tried to prove the world wrong.

When my single parent status (my husband works in Kolkata) often lodged me in situations that demanded solitary attention to my child, I found my frustration, irritation and numbness reaching new highs, as I kept believing that my work, books, as well as my not-at-sight-career were my refuge. I wanted to escape the stranglehold of being a mother.

Pipli, my daughter, and I, thus adjusted to the absence of each other when an October evening happened in our lives. We were returning from a friend’s place. I was sitting at the corner of an autorickshaw with Pipli on my lap, who in a frog-like embrace had her face buried in my chest. The almost-three-year-old was fast asleep, clasping me in the semi-circle of her tiny hands.

At that instant, I saw how we both held onto each other. I realised this was a relationship in which we were together, with a responsibility on both sides to build it. While she was constantly adjusting to the frustrated outbursts of a bruised mother, considering that to be her reality, I was offering her a shattered world even before her encounters with reality had begun. I was simply replacing one stereotype with another- motherhood as bliss with motherhood as stranglehold, as a trap, which, like the pigeonhole of small towns, must be escaped if one has to find emancipation.

I was reinforcing that sense of alienation that had been historically cultivated between mothers and children, thereby becoming a feeble reference point for my child. As we headed home, hand in hand, I realised I must rise to my belief in myself, and see if Pipli can find her belief in me, and, may be, that way in herself too.

My dislike for anything authoritarian did not really make me assume the authority or baggage of a parent. I offered myself to Pipli- a mesh of strengths and vulnerabilities- while being eager to learn from her. As I travelled, worked, turned more inwards, checked with myself more often than waging a clamour against the world, maintained a household single handedly, Pipli became part of my sojourns.

I read her children’s stories about Devi whom people called clumsy but who was a painter, Ari who was shy but a fine actor, and Bulbuli who loved her life in a bamboo hut. When Pipli started to draw, she drew a multi-coloured fish in a pond that was full of colourful sea plants, and captioned it, ‘I am Pipli’. When she started school, she embraced herself as the quiet child, while being sensitive and observant of her mates.

Both of us prioritise emotional needs and try to deal with joy and pain without much noise. I never felt the need to hide my life from her. This allows our relationship to share a lot without the need to encroach. We are attentive of each other, so that we can read into our silences.

While I have always tried to hug her pain away, she has come around to hold my hand when I have been at my lowest. Is this just about training? I don’t think so. It is about who we are, how we contribute to the growth of each other, and also about how we bind ourselves with others. Whenever I have felt my world come shattering down, her gentle voice has reminded me of our blessings.

Pipli is gentle and kind by nature – attributes I try to enhance by directing her attention to animals, birds, people, plants, and small creative engagements. She has made me realise that protest does not need a loud voice, but a firm one- the kind she uses mostly to back me up. ‘Your Maa can’t cook’ is confronted with a simple ‘Toh ki?’ (‘So what’).

‘Why is your Maa studying all the time?’ Pat says Pipli, ‘She likes to!’ I laugh at such conversations which I overhear often and feel happy that while the mature world finds me eccentric and a misfit, Pipli has accepted me without much drama. When she is told that her mother’s PhD in literature is nothing compared to a PhD in science, I overhear her silent resistance- ‘Maa works very hard’.

I have learned to ignore the pain such opinions cause, because not everyone in the world needs to understand me or my detachment towards spaces I find reductive, but Pipli discusses the need of studying literature and science with her Papa and emerges with- ‘I like Maths, Literature, Computer and Painting. I will make book marks now!’

I am social without the hankering for it. I never believed in having a ‘best friend’, although I have been blessed with endearing friendships over the years. Pipli, I have found, is also comfortable in not being overtly social. While people admire her because of her ‘daak’, how she addresses them, and also for her sensitive nature, she does not believe in being cooped by relationships.

She exits a WhatsApp friends’ group because someone was bossing over the rest, is not ready to address every boy close to her age as ‘dada’ or ‘bhai’, insists on touching the feet of Sapna di, my helping hand at home on every occasion, and considers Meshomashai, my next door neighbor, as her friend.

Also read: Plants, Pandemic And Children: Discovering The Joys Of Gardening With A Six Year Old

While mature people transform into regressive storytellers whenever they encounter a friendship between a man and a woman, I feel happy that I have been able to make Pipli consider friendship to be an organic relationship which can bind anyone with anyone else. An observant and opinionated child of eight, Pipli often becomes a mirror for/of me, while I realise we have come a long way since that auto ride.

There are bumpy roads ahead, I know, but till now this growing up together has been extremely enjoyable. These two years of constricted life seems to have woven us closer, although we are not unmindful of the space we need between us. Instead of stifling one another in love and sacrifice, we are firmly holding on to each other- her tiny arms now make a full circle of warmth around me. 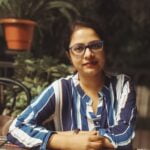