Ron Weasley Was The Worst Thing To Happen To Hermione Granger

For Hermione to qualify as a friend and as a substantial character, she had to be brilliant, provide the two boys with notes so they didn't fail, look over their homework, save their lives and occasionally take the blame for their rule-breaking.
By Mahika Banerji Jul 31, 2018 6 min read

Though she was thrilled to receive the Hogwarts letter, little did Hermione Granger know that there were multiple setbacks already in place for her within the wizarding world – patriarchy and wizarding lineage-based supremacy, to name a couple. As she became older, Dumbledore considered her to be a useful pawn in the great game of Harry vs Voldemort. To top it off, she became best friends with two people who did not appreciate her as much as they should, occasionally treated her badly, and she even went on to marry one of them – Ron Weasley.

JK Rowling herself admitted that Hermione and Ron were not a good match and that Hermione should have married Harry. But why were her marital options limited to the two men who had (sometimes unwittingly) dictated her actions throughout the series the most? Harry repeatedly fails to stick up for her, there is no guarantee that he would have been a good husband to her. More importantly, did she have to take on the domestic route of marriage and children? Hermione Granger was a stickler for school rules, but she was also extraordinary and above convention and ‘normalcy’.

In The Philosopher’s Stone, Ron was continuously judgmental towards her and Harry never bothered to intervene. When she tried to correct him in Charms class, Ron sulked and made a mockery of her. It took the three of them nearly being killed by a troll together and Hermione taking the blame for it for her to be admitted into the boys’ club. All Harry and Ron had to do were get placed in the same compartment on the Hogwarts Express. 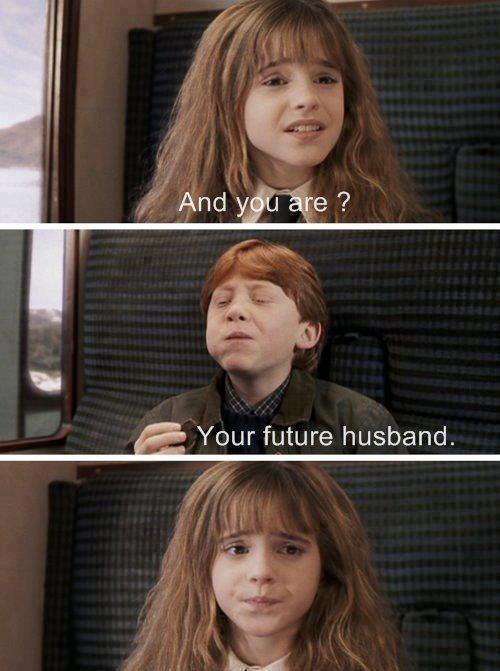 In Prisoner of Azkaban, Ron suddenly found himself concerned about an ailing rat whom he never really cared much for in the first place. Of course, he had the right to be angry with Hermione when he thought Crookshanks ate Scabbers (who in reality was a grown man in disguise watching teenage boys dress and undress and sleeping on the same bed as them). But he and Harry (who conveniently did not want to take sides) went on to neglect her after she reported the Firebolt to Professor McGonagall – a gesture out of concern for her friend’s life. When Scabbers was found alive, Ron didn’t bother to apologize to Hermione.

It took them nearly being killed by a troll for hermione to be admitted into the boys club.

Goblet of Fire saw Ronald Weasley’s behaviour take a turn for the worse. Hermione became a last resort for him to take to the Yule Ball. When she turned him down and went to the ball with Viktor Krum, he was incensed. Last I checked, Hermione was not his personal property. This sense of entitlement and ownership over Hermione was further exercised when he accused her of “fraternising with the enemy”. The lines between Hermione’s agency and Ron’s entitlement would not have been blurred even if she had gone with someone from Hogwarts. He was jealous, but this jealousy stemmed from the sense that Hermione, whom he had always taken for granted, was his. Harry silently agreed with Hermione when she accused Ron of treating her like a last resort, but as usual, did not intervene.

Half-Blood Prince showcased an all-time low, even by Ron’s standards. His jealousy of Viktor Krum and Hermione’s relationship erupted with a lava-like fury when he found out they kissed – two years ago. This was right after he slut-shamed his sister Ginny when he found her making out with her boyfriend (kudos to Ginny for holding her own, calling him out on his immaturity and insulting the living daylights out of him). He then went on to be consistently cold and derisive towards Hermione for days. Harry, the perpetual pacifist, again did not intervene. He only shook Ron up when he realised his Quidditch captainship could be affected by Ron’s performance.

Harry’s internal monologue stated, “He did not see how he could possibly explain to Hermione that what she had done to offend Ron was kiss Viktor Krum, not when the offence had occurred so long ago”. Her offence? For kissing who she wanted? Also, was Hermione expected to understand Ron’s misogynist behaviour? I personally cheered when Hermione attacked him with the birds. A few days after, Harry found himself missing his best friend, after spending a lot of time in silence in the library alongside Hermione. Instead of sticking up for her, he worried about his voice vanishing from lack of use and how life wasn’t as fun with Hermione.

In The Deathly Hallows, Hermione consistently protected and saved her two friends. What did she get in return? Ron’s jealousy and entitlement peaking, after being enhanced by the Horcrux. Ron got suspicious about Harry and Hermione getting together, and had to be assured that Harry loves Hemione like a sister. About that – were six years of friendship and consistently staying together not proof enough for darling Ronald? Harry and Hermione wore the Horcrux too. Yet, Ron could not muster enough rational sense to stick it out for the girl who had always stood by his side, if not for Harry. Instead, he snapped at her, accused her of “choosing him (Harry)” and stormed out, despite Hermione in tears begging for him to come back.

Yes, he did come back. Again, I cheered when Hermione started beating the crap out of him. It was only when Hermione initiated an attack though, did Harry suddenly find his backbone and intervene with a Shield Charm. It only took him six years to intervene in a conflict situation between his two best friends – and only to protect his precious ‘bro’ Ron. The series culminated in Hermione marrying Ron. She married a coarse, mediocre, patriarchal, angry, entitled man who expected his food to be delivered into his lap 24/7.

For Hermione to qualify as a friend and as a substantial character, she had to be brilliant, provide the two boys with notes so they didn’t fail, look over their homework, save their lives and occasionally take the blame for their rule-breaking. Ron merely had to be mediocre and crass. Can you imagine a friend-Hermione who cracked fart jokes? To be a part of the wizarding bro-code, Hermione had to be extraordinary. On his part, Harry failed to be a better friend to Hermione. He understood cruelty and he understood neglect, having had first-hand experience. Yet when the time came to do something about it in his very inner circle, he was a spectacular let down.

To be a part of the wizarding bro-code, Hermione had to be extraordinary.

I really wish Ronald Weasley had contracted Spattergroit. Standing naked in a barrel full of eel’s eyes with a toad’s liver wrapped around him would have been a small comeuppance for the way he consistently treated Hermione. Given Ron’s temper, his entitlement and the immense career aspirations Hermione had, would Ron have given her the support she needed from her significant other? I cannot help but wonder if such a foul-tempered and jealous person would have gone on to become an abusive partner. The only thing Ron and Hermione had in common was that they were Harry’s best friends and that they both punched Malfoy.

Potterverse would have collapsed without her. Hermione Granger was such a force of nature that in Chamber of Secrets, she saved the day while she was petrified, directing Harry and Ron towards the existence of the basilisk. While Dumbledore awarded Harry and Ron awards for special services to the school, I do not remember Hermione receiving such an award. Yes, Harry did a chunk of the heavy lifting (he did battle a basilisk after all), but only after Hermione set them down the path by doing something highly unlikely (and I bet soul-crushing) – ripping a page out of a library book, stealing it and writing on it.

Hermione Granger deserved better. Dumbledore saw the brilliance in her and used her to slow down Harry’s hot head, which he later admitted. Only Hagrid saw her for who she truly was, appreciated her and stuck up for her. He sternly reprimanded Ron and Harry in Prisoner of Azkaban regarding their friendship being limited by rats and glossy broomsticks and the cruel neglect meted out to Hermione. To quote Hagrid, after Malfoy called Hermione a “mudblood”, “An'[d] they haven’t invented a spell our Hermione can'[t] do”. She is hands down the strongest pillar of the magical community. She consistently saved the lives of the people around her and loved them selflessly. Keeping that in mind, this 31st July (and for the rest of my life), I celebrate Grangerverse and not Potterverse.