HealthSex & Sexuality Geriatric Love: Why Do We Cringe At Old People Sex?

Geriatric Love: Why Do We Cringe At Old People Sex?

What I learned was that it is a myth that sexuality in later life is undignified or that old people are asexual.
By Guest Writer Aug 29, 2018 4 min read

I had never considered old people as sexual beings, as beings who desire pleasure and enjoy eroticism. My grandfather had his last child when he was 50 and I remember my aunt, getting embarrassed in front of her friends, when they called him ‘grandfather’. I remember reminding myself oft and again, after my numerous relationship hurricanes, “As the laugh lines on my face will increase, my vigour for romance will decrease”.

Also read: The Sex Life Of Trans Men And Why Our Sexuality Matters

My myth was broken a month back when I had a passionate exchange with a 66 years old man. He is a year old than my father. And he broke the myth to me that the elderly are desexualised beings. The man is a fit, global citizen, and a successful entrepreneur. He is fond of poetry and all forms of creative and artistic expressions. Sharing a snippet of what he feels about intimacy –

“Somehow, in our puritanical society in India talking about sex is taboo. Things here in America are much more liberal and most people are honest and open with their feelings and needs and have healthy and respectful sexual relationships with like-minded partners, married or not. The very open and social work environment in American offices facilitate such interactions. I have had many wonderful experiences here in the US but never in India.

I believe spontaneity in sex is much more important – the surprise element and the adventure part of it. Unexpected time, place, and positions work great. I do not know about India. But here in the US we have a lot of privacy inside or outside of the house. So we can get romantic anywhere from the kitchen to the bathroom to the staircase to the bedroom or study or the backyard.

I have a private pool with a jacuzzi. Going skinny dipping with your girl in the moonlight and doing it with hot water swirling around you is as romantic as it can ever get, especially with a glass of champagne. At the very minimum, showering together, lathering up each other especially the genitalia, going down each other in the shower before jumping in the bed is absolutely amazing.”

What I learned from him was that it is a myth that sexuality in later life is undignified or that old people are asexual.

What I learned from him was that it is a myth that sexuality in later life is undignified or that old people are asexual. The only thing that matters is that one should have a core attribute for lovemaking, a desire, and a healthy body and mind which that 66-year-old man had.

There is something else integral to the Indian society that makes it difficult for us to connect sexual intercourse with old age – religion.

Osho, in his discourse From Sex to Superconsciousness mentions how our religion has cultivated tendencies to cast life away, renounce the world, to strive for the other side of death – on heaven, moksha, and nirvana. He says:

“Religion does not advise contemplation of life; it does not help you to lead your life. The philosophy of religion has always been death oriented, instead of life oriented. As a result of these misconceptions, only elderly people show most interest in religion. You will only find old people in the places of God – in the temples, in the churches, in the gurudwaras, and in the mosques.” 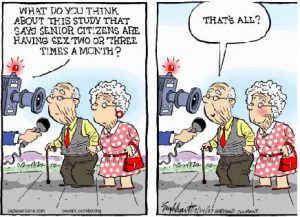 I thought of taking in another perspective and called up Mahabanoo-Mody-Kotwal, a veteran actress and the power behind the Indian adaptation of the iconic play, Vagina Monologues that is wildly successful here in India. Here is what she feels:

“Sexuality does not get affected with advancing age, unless there is a physical problem. Feeling fit, sharing common interests like listening to music, attending artistic events,
going to a movie, just a walk in the park and often just holding hands can bring back Eros. But because women are slightly inhibited from the start, what with it having been drummed into them that sex is wrong, not to be enjoyed, a sin etc. they do not allow themselves to seek pleasure. I had a young co-actor, nearing the age of 40 ask me – Do women experience orgasm after 50? Behind her question loomed a bit of insecurity, a stigma attached to sex in old age that leads women to believe that pleasure will wane with old age.

It is important for parents and teachers to give proper sex education when children are young so, that these wrong impressions don’t stop them from experiencing the joys of sex when they are ready for it, and across their lifetime, in a responsible manner.”

Times have changed and it is only pertinent that we embrace a new view of sexuality that does not make us ignorant or cringe at the thought of old age sex.

The (urban) elderly now have more time and resources for self-grooming and hence have a greater vigour and vitality. So there is no reason why they should refrain from expressing a healthy sexual appetite. Yes, age can bring certain physical limitations such as vaginal dryness and erectile dysfunction, which can be corrected with medical intervention. But perhaps, this limitation can also be a trigger to finding new ways of lovemaking based on extended foreplay and not mere penetration. Isn’t it always satisfying to have ample amounts of cuddling, kissing, stroking, and massaging, no matter the age? 🙂

Also read: How My Sexuality Is Rooted In Feminism And Love

Pallavi is a writer-activist working in the sphere of ‘female reproductive freedom’. Through her campaign ‘Red Womb’, she strives to improve menstrual facilities at the workplace for women and ensure the right contraception education for all adolescents and young women. She can be followed on Facebook.

A World Designed By And For Men: The PMS Edition

Why Do We Need The Menstrual Leave Policy In India?

Will I Keep Calling Myself A Feminist If I Sexualize Women?