Captain Prem Mathur, a young girl hailing from Allahabad, dared to challenge the ‘cult of domesticity’ and went on to become the first Indian woman commercial pilot.
By Yashfeen Adil Sep 5, 2019 5 min read

In the times when the distinction between the public sphere and the private sphere was sharp and rigid, Captain Prem Mathur, a young girl hailing from Allahabad, dared to challenge the ‘cult of domesticity’ and went on to become the first Indian woman commercial pilot.

Prem Mathur was born in Aligarh, Uttar Pradesh in the year 1924. Owing to her father’s transfer to Allahabad, quite early in her life she along with her family shifted to Allahabad and spent her entire childhood in the city. She was the youngest among the five siblings and had lost her mother when she was merely six months old. She completed her schooling from Annie Besant School, Allahabad and her higher secondary from Ewing Christian College. For her Bachelors, she joined Allahabad University.

Sowing of the Seeds of Her Desire

Mathur’s elder brother was a flying instructor while her younger brother engaged in business. After the Second World War, her younger brother bought some of the old aircrafts used in the war. He sold one of the aeroplanes to Lanka Flying Club and hired Captain Atal of Delhi Flying Club to deliver the flight to Colombo. It was Captain Atal who went on to play an important role in sowing the seeds of her desire to become a pilot.

Captain Atal, in order to scare her had taken her for a ride on the aircraft and displayed all the kinds of aerobatics he knew. But Mathur had left him surprised for she showed no signs of fear and instead enjoyed the entire session and asked him to take her again. In the next ride, Captain Atal gave her the controls and gave her all the instructions she needed to fly the aircraft. When they returned home she saw that on a paper he had written “You are a tough woman. You can become a pilot. Why don’t you try?” This is what motivated and encouraged Captain Mathur to take this decision of becoming a pilot.

Mathur would cycle every day and go for her training. In no time, she was ready to fly solo without an instructor because of her enthusiasm, determination and talent.

Beginning of Her Career

In October 1948, on her request to Mr Raja Badri, the managing director of Lucknow Flying Club, a new branch of the club was opened in Allahabad and Captain Atal was appointed as an instructor. She was Captain Atal’s first student in the club. Mathur would cycle every day and go for her training. In no time, she was ready to fly solo without an instructor because of her enthusiasm, determination and talent.

In 1949, her club was invited for the National Air Race to be held in Calcutta. When she expressed eagerness to participate and requested for an aeroplane, she was discouraged on grounds that all the other participants were men who were highly experienced instructors in the field unlike her. Nonetheless, she did manage to get a flight owing to her dedication and persistence. However, the plane was a small one with a capacity of only 10-11 gallons of petrol for covering a distance of about 3500 miles. In the race, she was required to travel from Barrackpur to Jamshedpur, Jamshedpur to Asansol and finally Asansol to Calcutta. Her father’s confidence in her further uplifted her spirits when he asked her to remember that, “a person dies only once.”

In those days, there were no radios and one had to use maps to reach a destination. Using the map, when she reached Patna it had become quite dark and having no experience of flying at night she stayed put in the aircraft for the night without any sense of fright and flew to Calcutta the next morning, where she was received with amazement. The race began two days later and Captain Prem Mathur defeated the other participants and reached each of the destinations first. It was a rare moment because a woman with a mere experience of a hundred hours of flying had defeated the adept men. Overnight she became a public figure and made it to the headlines of all the newspapers. She was congratulated and appreciated by VijayaLakshmi Pandit, General Cariappa, Pandit Govind Ballabh Pant, Lal Bahadur Shastri and the like.

Following this, she travelled to Delhi to prepare for the commercial pilot license test. During this period, she lost her elder brother in an accident but she completed the test unimpeded on the encouragement of her father. Her hard work paid off soon when she became the first woman commercial pilot in India. It was, however, just the beginning of her struggles. She was advised to take up the job of an instructor but she was adamant about joining an airline. She was rejected by eight airline companies on grounds that men would not be comfortable with a female pilot. This, however, did not stop her. She relentlessly continued to try.

This line of thinking continues till today. Men continue to be uncomfortable with women claiming male-dominated spaces. The idea that women cannot respond immediately to emergency situations continues to prevail. Both men and women accept and believe that the public space continues to be an area of expertise for men. To this day, many of the passengers boarding a flight with only women pilots feel that they would have preferred if at least one of the pilots was a man, some go to the extent of claiming that they prefer deplaning such a flight.

She was rejected by eight airline companies on grounds that men would not be comfortable with a female pilot. This, however, did not stop her. She relentlessly continued to try.

Finally, it was Deccan Airways that appointed her as a co-pilot in Hyderabad for six months without pay. In her interview for Deccan Airways, she was asked a number of technical questions and also how would she manage with the men during night halts. She responded to this by telling them that they wouldn’t regret hiring her. During this period, she flew important figures like Indira Gandhi, Lal Bahadur Shastri and Lady Mountbatten. Very soon, she found herself unable to break the glass ceiling as Deccan Airways refused to give her command as a pilot despite her completing the number of required hours of flying by informing her that “if they know the pilot is a woman they will run away“.

She resigned from Deccan Airways and became G.D Birla’s private jet pilot. In 1953, she joined Indian Airlines, which was brought into being after bringing together eight pre-independence domestic airlines, making India the first country to hire a female pilot in their IATA (International Air Transport Association) Airlines Ltd. She continued to work with the airline until she retired in 1984. In 1992, Captain Mathur died mysteriously.

Captain Prem Mathur’s determination, courage, resilience, strength and hard work continue to be a source of inspiration for all the women. She was one of the few women who could challenge the entrenched patriarchal system in society. It is the private and public dichotomy that sustains this system and prevents women from entering the supposedly superior male-dominated public spaces. The private sphere or the home is considered the proper place for women for they have been viewed as the moral protector of the family and home.

Piety, purity, submissiveness, domesticity, which are considered signs of true femininity, were all challenged by Captain Prem Mathur and she demonstrated that women are equally capable of engaging in intellectual pursuits and are in no way inferior to men. Captain Prem Mathur’s breakthrough informs us that it is extremely important for us to empower ourselves without the assistance of others because self-confidence and realisation of self-worth is the basis of achieving all one wants. 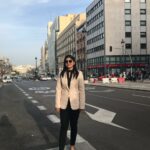 A Tale Of Divide, Desire And A Devadasi: Girl Made Of Gold By Gitanjali Kolanad