Why You Should Watch The Lighthearted Crime Drama Series ‘Hundred’

Hundred does a very good job at portraying the difficulties faced by women in police department, especially when they are at a significant designation.
By Mudita Sonawane May 8, 2020 4 min read

To be honest, the only reason why I went for Hundred initially, was for Rinku Rajguru. It’s good to see her on screen after having watched her remarkable and strong performance in the movies Sairat and Kagar. Along with Rinku Rajguru, ‘Hundred‘ includes Lara Dutta, Karan Wahi, Parmeet Sethi, Sudhanshu Pandey, Rajeev Siddhartha, Makrand Deshpande and Rohini Hattangadi.

The story is narrated by Mumbai based ACP Saumya Shukla (played by Lara Dutta), and it revolves around what happens in the life of Netra Patil (played by Rinku Rajguru), when she gets diagnosed with a brain tumor and has hundred days to live. Netra is an ordinary young government employee in the census department with a not-so-exciting life. She lives in a chawl in Mumbai with three men from three different generations – her little brother, voluntarily retired father and grandfather. Her mother is deceased long back, making all three of the men in house extremely dependent on Netra for everything.

Initially, because of the overdemanding family, she is shown to have no life of her own. Her uncle constantly reminds her to take a break for herself and go for some adventure to utilise her youth. He tells her if she continued living for others, she’ll be treated as Kadhipatta (curry leaves) that’s present in every dish but has no identity of its own.

On the other hand, Saumya Shukla lives a very different life being a police officer and a woman. Hundred does a very good job at portraying the difficulties faced by women in police department, especially when they are at a significant designation. Police or no police, every independent women can relate to Saumya, who, despite being an efficient police officer, gets repeatedly reduced to the department’s showgirl. Do we get surprised when her boss constantly removes her from important challenging cases and sends her for casual events like inaugural functions and celebrity birthday parties to make a show of women empowerment? Nope, it happens to every woman at a male-dominated workplace..

When Saumya comes across Netra, she plants the idea of enjoying the remaining hundred days to the fullest in Netra’s mind. And Netra starts her own bucket list that includes adventures like going to Switzerland, having sex, and enjoying all possible thrills of life. Saumya is constantly frustrated because of her own husband Pravin, a DCP in Narcotics department (Sudhanshu Pandey) and her boss DCP Anshuman (Parmeet Sethi). Pravin and Anshuman use their alliance and professional superiority to constantly keep Saumya in check. This involves getting her transferred from departments, filing for inquiries when she even starts having her own way, never giving her permission to initiate any sting operations, constantly trying to convince her to go for IT department’s desk job instead of risky outdoor police work, etc.

Both Netra and Saumya have their own aspirations in life, and both make use of each other – Saumya makes Netra a secret agent/informer to bust rackets and Netra agrees because she wants to feel adventurous before dying of tumor. Along with their mission, both explore their romantic and sexual interests in their own ways. Saumya has an extramarital affair with her informer Maddy (Karan Wahi) who’s an aspiring rapper. But viewers don’t feel like judging her after looking at the subtle emotional torture she faces because of her husband. We do feel bad for Maddy though, he is that good man every woman would love to have in her life. He has good morals and develops a very good friendship with Netra in the later part.

The development of Saumya and Netra’s alliance is the key element in Hundred, along with how that affects other characters. We can’t call them friends – many times they use and manipulate each other for gains – but their interactions teach us how women who mean business would function in a world full of politics where everything is like a chess game. The woman’s gaze that narrates the story is vital to understand the complexities of human nature. It also allows the viewers to get a glimpse of how women look at the world full of misogyny and mansplaining.

We see stark contrasts in some aspects of Saumya and Netra. Despite coming from a privileged sector of so called ‘modern’ people and despite being an IPS officer, Saumya is very slow at taking a firm stand her patriarchal boss and family. Much later in the season she realises that ‘enough is enough’. On the other hand, Netra, despite coming from an ordinary lower middle class background – that is usually stereotyped as regressive – is much bolder in speaking her mind and getting what she seeks.

We can see strong resemblance between Archi from Sairaat and Netra from Hundred. Even her father gradually becomes more open-minded and defends her when her aunt criticises her looks and judges her modern dress. He dares her to criticize her daughter and tells her, “Ye 24,000 rupyon ki dress hai, us ne apni kamai se khareedi hai, (she’s bought that dress with her own money)“

Season 2 will reveal how they deal with the chaos caused by their actions, till then you can enjoy season 1 on Hotstar! 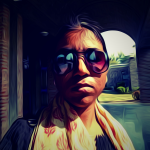